George Cody: We might owe our existence to formaldehyde

A substance we usually think of as toxic – formaldehyde – might have helped set the stage for life on Earth.

A substance we usually think of as toxic – formaldehyde – might have helped set the stage for life on Earth, according to an April 2011 study in the Proceedings of the National Academy of Sciences. EarthSky spoke to the study’s lead author, George Cody. His team used a hi-tech method called molecular spectroscopy to identify formaldehyde as the building block of very primitive organic matter in comets, and meteorites found here on Earth. He told us:

The formaldehyde that forms in the cold, dark regions of space forms the major constituent of organic matter in our solar system. 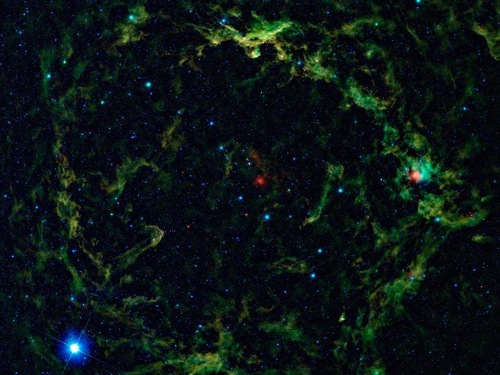 Formaldehyde is a special kind of molecule, Dr. Cody explained. First, it contains carbon, and carbon is what life on Earth – organic matter, like us – is made of. Also, he said:

Formaldehyde is unique in the sense that it can add to itself, and grow into a bigger molecule. Virtually all of the other small molecules in the galaxy can’t do that.

Which proved important about 4.5 billion years ago, when a Mars-size object slammed into the Earth, and the moon formed. The collision, most experts say, caused huge numbers of organic molecules to flee our planet. But formaldehyde molecules held onto a fair chunk of Earth’s carbon that we might have otherwise lost , Cody believes.

What it does do is set a necessary condition for the origin of life. In order to have life on this planet, you had to have carbon on this planet.

The way that Dr. Cody discovered that formaldehyde underlies organic matter is a little complicated. He said that, using high-tech instruments that measure the response of molecules to light (also known as molecular spectroscopy), he discovered that lab-grown chains of formaldehyde were identical to the organic compounds found in meteorites. He was also able to determine, by adding telescopes into the mix, that formaldehyde polymers are found in comets. He said:

Meteorites are derived from the asteroid belt, and wind up landing on the earth and we collect them. And the comets, of course, are these really primitive bodies of ice and rock that sit out beyond the orbit of Neptune. They exist in different regions of the solar system, and there’s absolutely no reason to exist that there’s any relationship between the organic matter in both. Up until this point, nobody knew why there was organic matter in either, where it came from.

But there happens to be, indicating that the matter of the entire solar system is of similar chemical origins. Dr. Cody explained that it might be strange to think of meteorites – dense chunks of rock which clearly aren’t alive – contain organic matter like formaldehyde. He explained why this is the case:

But, he added, it does contain lots of atoms – carbon, hydrogen, and oxygen. It’s kind of a blob of atoms. At first glance, he said, formaldehyde doesn’t seem like a significant molecule. Other compounds in space – containing iron, helium, nitrogen, and the like – are way more abundant. But it’s how big and strong and reactive formaldehyde is that makes it so special. Dr. Cody added that one of the reasons formaldehyde is so important, because it contains carbon. The Earth almost lost all its carbon – a precursor for life – when a giant asteroid slammed into the Earth 4.5 billion years ago.

Cody clarified that while it might seem like our world has lots of carbon in it – just look at all the trees and living things and creatures and rock that contain carbon! – relative to other stuff in space, Earth actually contains very little. He explained.

By contrast, on Earth, carbon is at about 300 ppm (parts per million). In other words, it constitutes far less than 1% of Earth’s molecular makeup. So, Cody reiterated, that’s why it was such a close call for the Earth when the moon formed, and the collision pushed tremendous amounts of carbon out of the atmosphere.

And that sticky, heavy compound was, of course, carbon-rich formaldehyde. We might owe our existence to it, Dr. Cody said.