Super strong silk from genetically engineered silkworms might be useful for sutures, artificial limbs and parachutes.

Transgenically-engineered silkworms, with glowing red eyes, are spinning silk in a lab at at University of Notre Dame that has the prized strength and elasticity of spider silk. The researchers – who publicly announced their results today (January 6, 2011) – say this long-sought super silk might be used to make sutures, artificial limbs and parachutes. 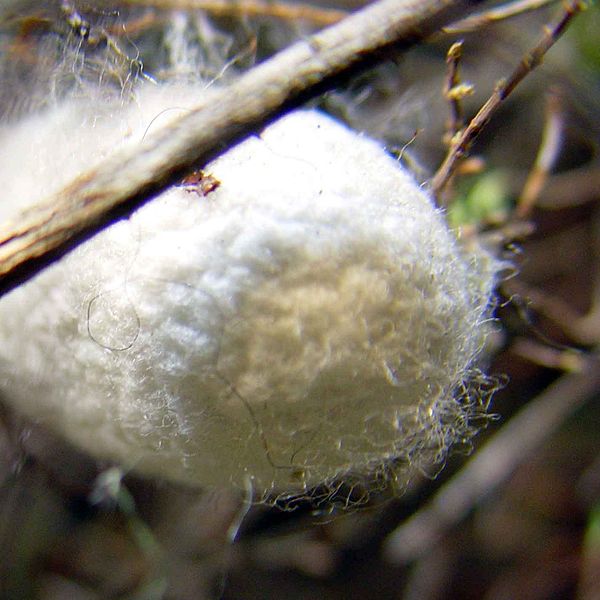 The Proceedings of the National Academy of Sciences published this peer-reviewed work on January 3, 2012.

Malcolm Fraser, Jr., professor of biological sciences at University of Notre Dame, whose earlier work was the foundation of this research, said:

It’s something nobody has done before.

According to a story at DiscoverMagazine.com, in the 1980s Malcolm Fraser …:

… identified pieces of DNA that can hop around insect genomes, cutting themselves out of one location and pasting themselves in somewhere else. He named them piggyBac, and he has turned them into tools for genetic engineering. You can load piggyBac elements with the genes of your choice, and use them to insert those genes into a given genome.

In this case, the team inserted silk genes into the silk-making glands of silkworms. The researchers also added another gene to their piggyBac vehicle – which caused those silkworms that had been successfully engineered to have glowing red eyes. That way, they knew which ones to watch.

… tougher than typical silkworm silk and as tough as dragline silk fibers produced by spiders, demonstrating that silkworms can be engineered to produce such improved fibers. 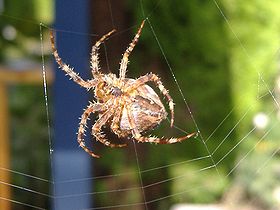 The dragline silk of a spider’s web – used for a web’s outer rim and spokes and the lifeline – has a tensile strength stronger than high-grade steel. Image Credit: Wikimedia Commons

Spider silk is amazing stuff. In particular, the “dragline” – used for a spider web’s outer rim and spokes and the lifeline – can be as strong per unit weight as high-grade steel, and also much tougher. It is also elastic enough to stretch several times its own length. The human mind has conceived of many uses for spider silk, if only we could make enough of it: wound dressings, artificial ligaments, tendons, tissue scaffolds, microcapsules, cosmetics and textiles, these researchers say.

But commercial production of spider silk from spiders isn’t practical. Spiders are cannibalistic and territorial. Researchers have experimented with producing the stronger material in other organisms, including bacteria, insects, mammals and plants, but those proteins require mechanical spinning – a task the silkworms perform naturally.

Kraig Biocraft Laboratories, Inc., with several of these researchers on its board, is currently evaluating several business opportunities for this first-generation fiber for both textile and non-textile use. The researchers ultimately expect to improve on the first-generation product to make even stronger fibers.