Geckos are renowned for their acrobatic feats on land and in the air. Turns out they can also run on water.

Geckos are renowned for their acrobatic feats on land and in the air, but a new study reveals that they can also run on water.

Robert Full, a professor of integrative biology at University of California, Berkeley is the senior author of the study, published December 6, 2018, in the peer-reviewed journal Current Biology Full said in a statement:

The teams studied flat-tailed house geckos, common in South and Southeast Asia. In the lab, the research team built a long water tank, placed the geckos on a plank and startled them by touching their tails. Using high-speed video, they were able to closely study the geckos’ techniques and estimate the forces involved.

They found the geckos were able to run at nearly a meter (3 feet) per second over water, and easily transition to speeding across solid ground or climbing up a vertical surface. The researchers said that geckos sprinting on the water’s surface exceed the absolute swimming speeds of many larger, aquatic specialists including ducks, minks, muskrats, marine iguanas and juvenile alligators, and are faster in relative speed than any recorded surface swimmer, other than whirligig beetles. 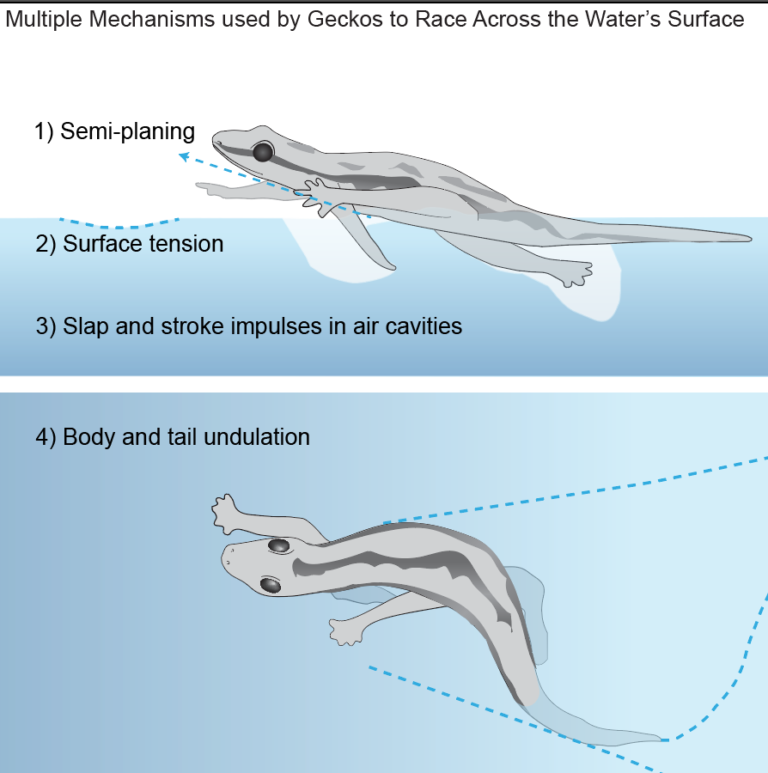 The study describes 4 separate strategies that geckos use to skitter across the surface of water: planing, like a speed boat; support from surface tension; slapping and dragging the water; and propulsion with the tail. Image via PolyPEDAL lab graphic, UC Berkeley

Smaller animals like insects – spiders, beetles and water striders, for example – are light enough to be kept afloat by surface tension, said the researchers, which allows them to easily glide across the surface. Larger animals, such as swans during takeoff or the basilisk lizard, and even dolphins rising up on their tails, rapidly slap and stroke the water to keep above the waves. Full said:

Bigger animals can’t use surface tension, so they end up pushing and slapping the surface, which produces a force if you do it hard enough.

But the gecko is of intermediate size: at about 6 grams (1/5 of an ounce, or the weight of a sheet of paper), they are too large to float above the surface, but too light to keep their bodies above water by slapping forces only. 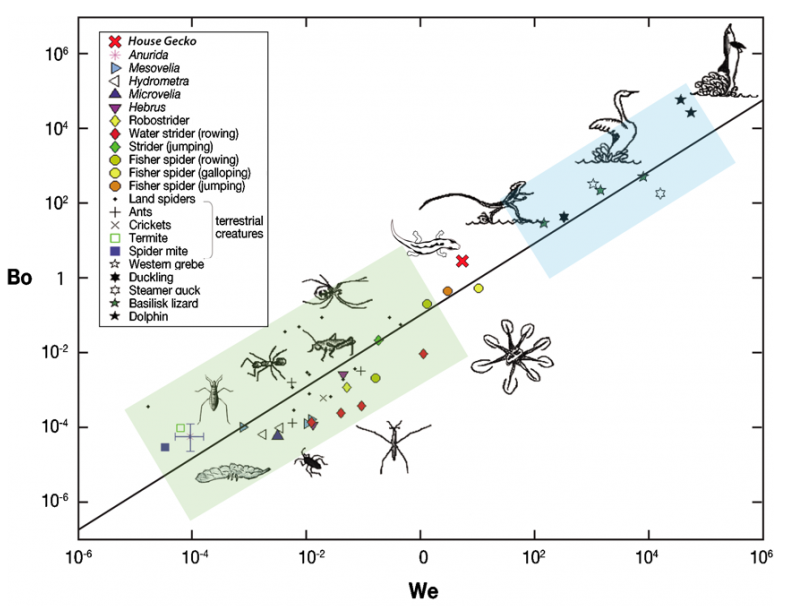 Animals use a variety of techniques to remain above water. Lighter animals, mostly insects, are supported by surface tension alone. Heavier animals can produce enough force with their feet or tails to keep above water. But geckos are in between, using both techniques. Image via PolyPEDAL lab graphic, UC Berkeley