This past winter, Arctic sea ice extent sank to a record low for the 3rd straight year. Now, NASA is looking at the summer melt season’s impact on the Arctic’s oldest, thickest sea ice. 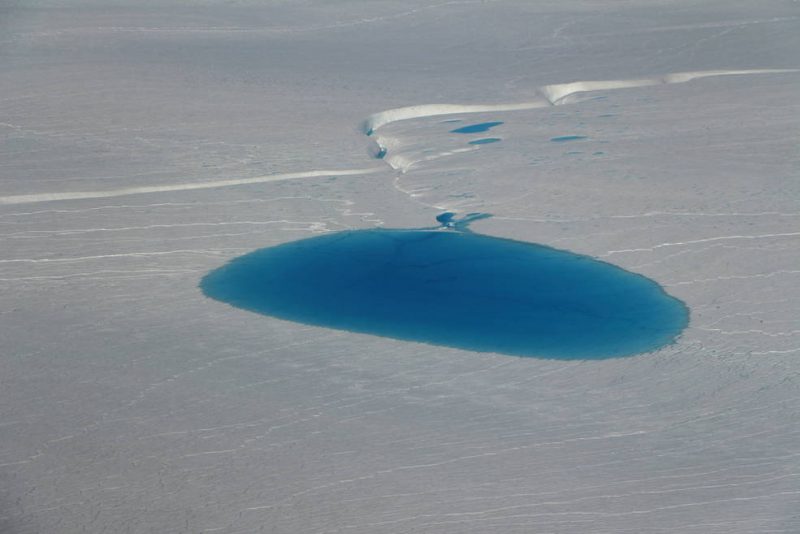 One of the dozen supraglacial lakes that Operation IceBridge surveyed to measure lake depth on July 19, 2017. Image via NASA/John Sonntag.

Earlier this year, Arctic sea ice sank to a record low wintertime extent for the third straight year. On July 17, 2017, Operation IceBridge, NASA’s airborne survey of polar ice, launched from Thule Air Base, in northwest Greenland to observe the impact of the melt season on the Arctic’s oldest and thickest sea ice.

Weather permitting, the IceBridge scientists are expecting to complete six, four-hour flights focusing on sea ice that has survived at least one summer. This older multiyear ice, once the bulwark of the Arctic sea ice pack, has dramatically thinned and shrunk in extent along with the warming climate. In the mid-1980s, multi-year ice accounted for 70 percent of total winter Arctic sea ice extent. By the end of 2012, according to a NASA statement, this percentage had dropped to less than 20 percent.

Most of the central Arctic Ocean used to be covered with thick multiyear ice that would not completely melt during the summer and reflect back sunshine. But we have now lost most of this old ice and exposed the open ocean below, which absorbs most of the sun’s energy. That’s one reason the Arctic warming has increased nearly twice the global average— when we lose the reflecting cover of the Arctic Ocean, we lose a mechanism to cool the planet. 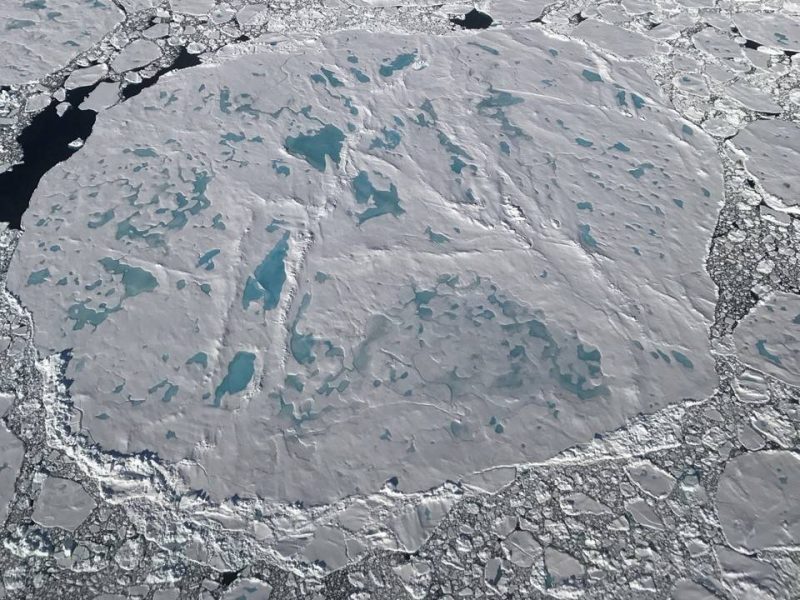 A large circular sea ice floe covered with melt ponds and surrounded by smaller floes, as seen from an Operation IceBridge flight on July 17, 2017. Image via NASA/Nathan Kurtz.

The sea ice flights will survey melt ponds – pools of melt water on the ice surface that may contribute to the accelerated retreat of sea ice. Last summer, IceBridge carried a short campaign from Barrow, Alaska, to study young sea ice, which tends to be thinner and flatter than multiyear ice and thus has shallower melt ponds on its surface. Kurtz said:

The ice we’re flying over this summer is much more deformed, with a much rougher topography, so the melt ponds that form on it are quite different.

IceBridge is also flying a set of tracks to locate areas of sea ice that the mission already flew over in March and April, during its regular springtime campaign, to measure how the ice has melted since then. Kutz said:

The sea ice can easily have drifted hundreds of miles between the spring and now, so we’re tracking the ice as it’s moving from satellite data.

Bottom line: On July 17, 2017, NASA’s Operation IceBridge launched from northwest Greenland to observe the impact of the melt season on the Arctic’s oldest and thickest sea ice.