Future warming likely to be on high side of climate projections, analysis finds

Climate models that project a greater rise in global temperature are likely to prove more accurate than those showing a lesser rise, scientists say.

Today, two scientists at the National Center for Atmospheric Research (NCAR) released an analysis of 16 major climate models suggesting that future warming is likely to be on the high side of climate projections. Their goal was to see which models best matched the reality of our existing climate, in order to assess which models’ temperature projections might match our future climate best. The conclusion: climate models that project a greater rise in global temperature are likely to prove more accurate than those showing a lesser rise. 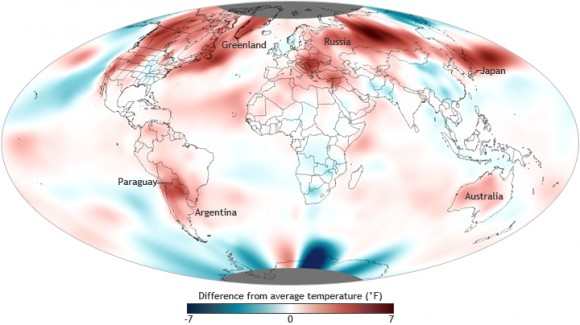 September 2012 global climate update. According to the latest monthly analysis from the National Climatic Data Center, the average global temperature for September 2012 tied with September 2005 as the warmest September since record keeping began in 1880. Read more here.

These scientists, John Fasullo and Kevin Trenberth, published their results today (November 8, 2012) in the journal Science. I asked Dr. Fasullo if these results suggested a profound change for the world our children and grandchildren will live in. He replied:

Yes. The results suggest that even the world we will live in – in the coming decades – is likely to differ considerably from the one we grew up in. But we also have the power to change that and I think this is just as important a message to emphasize. Our choice is between doing things the easy way with prudent and timely policy based on the best available science, or denial of the basic facts that we’re faced with – which will likely entail much higher costs in impacts and adaptation.

In some ways the world that we currently live in is quite different that than we grew up in, such as for example in the Arctic. 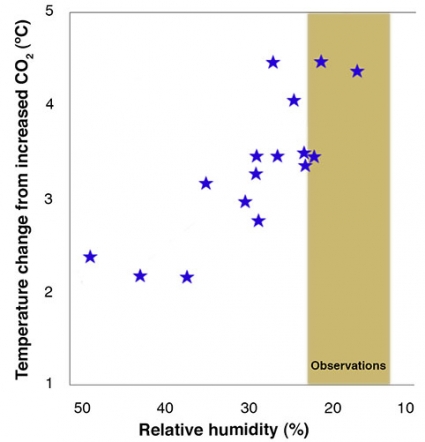 Computer models that more accurately depict dry conditions in a key part of the subtropical atmosphere are also more likely to predict greater climate warming from increased greenhouse gases. In this graphic, each star indicates one of 16 leading global climate models. The left axis (“warming”) corresponds to equilibrium climate sensitivity (ECS) in degrees C, which is the amount of warming produced by each model when carbon dioxide concentrations in the atmosphere are doubled over preindustrial values. The bottom axis shows May-to-August relative humidity for a portion of the upper atmosphere between about 20,000 to 30,000 feet in height and between about 10° and 25° latitude south in the southern subtropics. Image and caption via UCAR/NCAR AtmosNews. Image by Carlye Calvin, based on Fasullo and Trenberth, Science, 2012.

Fasullo and Trenberth analyzed how well sophisticated climate models reproduce observed relative humidity in the tropics and subtropics. They found that the climate models that most accurately captured what they called “complex moisture processes and associated clouds” were also the ones that projected the greatest amounts of warming for the years ahead. Dr. Fasullo said in a press release:

There is a striking relationship between how well climate models simulate relative humidity in key areas and how much warming they show in response to increasing carbon dioxide. Given how fundamental these processes are to clouds and the overall global climate, our findings indicate that warming is likely to be on the high side of current projections.

Global climate models are mathematical representations of the interactions between and within the ocean, land, ice, and atmosphere. No computer model can predict the future, but the more than two dozen major climate models in use by scientists today can and do provide a range of possibilities as to what the future might bring. These models are all based on long-established physical laws known to guide the processes occurring within Earth’s atmosphere. The movements of energy, air, and water in our atmosphere are complicated. The models attempt to represent interactions between the various components of climate, but it’s no easy task. That’s why each model differs slightly in its portrayal of what the future might bring.

The graph shows the average of a set of temperature simulations for the 20th century (black line), followed by projected temperatures for the 21st century based on a range of emissions scenarios (colored lines). The shaded areas around each line indicate the statistical spread (one standard deviation) provided by individual model runs. Via climatewatch.noaa.gov Find more info about this chart here.

Climate science is exceedingly complex. This drawing illustrates, in the broadest sense, the various components of Earth’s climate system. The physical components of Earth or its climate system are in caps: atmosphere, ocean, earth, land, ice-sheets and snow, biomass, and sea-ice, and space. The atmosphere, with its major gases, trace gases, clouds and aerosol, is influenced from space by radiation and from the underlying solid and liquid surface of the Earth by a variety of processes. Illustration via Iowa State University

Fasullo and Trenberth believe the result published today could provide a “breakthrough” in the longstanding quest to narrow the range of global warming expected in coming decades and beyond. Dr. Fasullo told me:

The full range in future projections depends on both on future forcing (i.e. increases in greenhouse gases) and model sensitivity. For a doubling of CO2 the range in warming is [about] 3 to 8 F., but that range can change in terms of warming by 2100 depending on which carbon emission scenario is assumed. While our study doesn’t comment on future emissions, it does conclude that the higher sensitivity models are more likely to be correct in their projections and therefore we should expect to be on the higher side of projections for any given emissions scenario.

The potential future effects of global climate change include more frequent wildfires, longer periods of drought in some regions and an increase in the number, duration and intensity of tropical storms. Read more at climate.nasa.gov

A higher temperature rise would produce greater impacts on society in terms of sea level rise, heat waves, droughts, and other threats. Bottom line: John Fasullo and Kevin Trenberth at the National Center for Atmospheric Research (NCAR) released an analysis of 16 major climate models suggesting that future warming is likely to be on the high side of climate projections. Their work showed that climate models that project a greater rise in global temperature are likely to prove more accurate than those showing a lesser rise. Read more about this study from NCAR