From Shackleton to satellites: Field-work and exploration at the poles

Historically field-work and exploration at the poles has meant months and years spent in travel on ship, sled, and foot … That’s all changed with the advent of airborne geophysics.

This is the second installment of a series of reports on the 2009/2010 research season in Antarctica by polar scientist Nick Frearson.

Historically field-work and exploration at the poles has meant months and years spent in travel on ship, sled, and foot. Impassible physical barriers such as ice blocked marine passageways and crevasse divided ice surfaces, together with frigid and unpredictable weather conditions, combined with limited financial resources to severely limit the amount of field-work completed. Shackleton’s ill fated expedition in Antarctica comes to mind when we consider the perils of field-work in early Antarctic exploration. It was perhaps this memory that drew me to Shackleton Bar in the Hotel Jose Nogueira near our base in Punta Arenas. Shackleton spent time in Punta Arenas trying to drum up funds to go back and rescue his men from Elephant Island where he had left them for several months in 1912. Beyond Shackleton – Magellan, Cook, Darwin, and many more have been here. It’ is certainly a place full of history!

Antarctic field-work all changed with the advent of airborne geophysics. Satellites and aircraft joined ship and overland data collection techniques to provide a more comprehensive look at these frozen ends of the Earth. Since their introduction, satellites have been used to relay images and information from space so effectively their use seems almost commonplace to many of us. The regular transmission of data from satellites has provided incredible amounts of information about our Earth, but satellites do have some shortcomings. Satellite information is gathered at such a distance that the resolution is not sufficiently high for all applications, and delays in design, production, and launch can mean gaps in data collection as they are ‘retired’ and replacements come on line.

NASA’s ICESat (Ice, Cloud and Elevation Satellite) was launched in 2003 and since then has been providing measurements on ice sheet mass balance (gain or loss) at both poles, along with multiple other measures around the globe. The ICE Bridge mission was designed to supplement the ICESat information, using DC-8 airplanes to fly over many of the same lines as ICESat but at a lower elevation to collect higher resolution data. Additional targeted areas have been added to the flight lines, as have new instruments so that not only is ice surface information being collected from lasers, but radar is being used to collect internal ice sheet data, and gravity is being use to capture data about what lies underneath the ice sheet. The plane is literally packed with instruments and their operators; most of the 260 plus seats have been removed for this work.

While on this mission we have learned that ICESat’s lasers have begun to fail. ICESat has exceeded its intended life, but there was hope that this mission could work in tandem with the satellite, each collecting complimentary datasets. This will not be the case. ICE Bridge will provide the ice data for this field season. 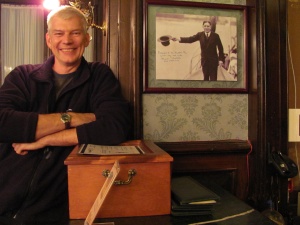 Photo at leftt: Nick shares a moment with Shackleton at the bar! (Photo credit: Nick Frearson)

Nick Frearson is a senior engineer at Columbia University’s Lamont-Doherty Earth Observatory specializing in providing and maintaining airborne geophysics installations for use in both the Arctic and Antarctica. Nick has spent several seasons in the field in both the north and south polar regions, most recently as part of the International Polar Year AGAP team that mapped the large mountain range hidden under the East Antarctic Ice Sheet. Nick will be working as part of the ICE Bridge project.

Top photo: Inside the DC-8 as we fly across the rapidly changing Pine Island Bay – looking forward to the cockpit past the ATM laser on the left and the navigation systems on the right.