From algae to crude oil in less than an hour

Engineers at the Pacific Northwest National Laboratory have developed a pressure cooker-like technique that can convert algae into biofuel in less than an hour.

Scientists continue to make new strides towards producing renewable biofuels from algae. In a paper published in the October 2013 issue of the journal Algal Research, a team of engineers at the U.S. Department of Energy’s Pacific Northwest National Laboratory reports that they have designed a method that can covert algae to crude oil in less than an hour without the use of chemical solvents.

The scientists used a process known as hydrothermal liquefaction to convert wet slurries of algae—about the consistency of thick pea soup—into crude oil. The process uses high heat (350 degrees Celsius) and high pressure (20 megapascals) to turn carbon in the algae into useable crude oil. The crude oil can then be further processed to make gasoline, diesel fuel, and aviation fuel. 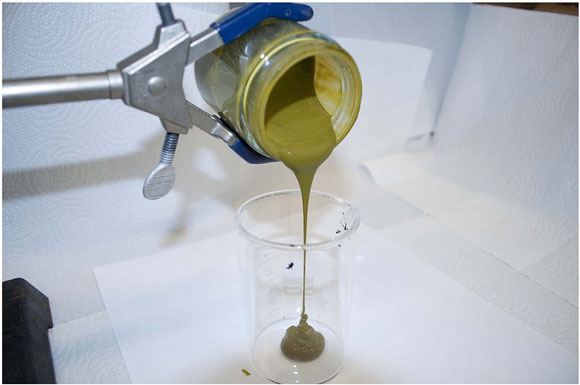 It’s a bit like using a pressure cooker, only the pressures and temperatures we use are much higher. In a sense, we are duplicating the process in the Earth that converted algae into oil over the course of millions of years. We’re just doing it much, much faster.

The process the engineers developed does not require that the algae be dried before processing, which is common in other algae biofuel production techniques. Not drying the algae is a huge energy saver. Other benefits of the new technique include the elimination of chemical solvents from the production process and the ability to recycle “waste” products such as nutrients and water and use them to grow even more algae.

You can watch Douglas Elliott walk you through the process they used to convert algae to biofuels in the video below.

The next challenge will be to scale up the process so that it can produce biofuels in amounts that can be used commercially. The current process can only handle about 1.5 liters of algae slurry per hour. Genifuel, a commercial partner of the research team, has licensed the new technology and is working to make it feasible for commercial use.

Bottom line: In a paper published in the journal Algal Research, a team of engineers at the Pacific Northwest National Laboratory reports that they have designed a method that can covert algae to biofuel in less than an hour without the use of chemical solvents.