There are over 200 species of legless lizards around the world. While they look similar to snakes, the lizards have eyelids and external ear openings that snakes do not possess. Scientists think that the lizards lost their legs millions of years ago so that they could burrow more quickly into the ground.

In 2009, scientists found a surprising amount of genetic diversity in one species of legless lizard endemic to California (Anniella pulchra), and they suspected that the museum specimens they were looking at were from different species. After all, subterranean vertebrates that aren’t very mobile tend to have high rates of speciation.

Now, a new analysis of several live lizards collected from diverse locations in California has found morphological evidence, in addition to the genetic evidence, which suggests that these small lizards should be classified as five distinct species. One piece of morphological evidence was differences in the colors of the lizard’s underbellies that ranged from yellow to purple to grey. The color differences were not observed readily in the museum specimens because preservatives had leached almost all of the color away. Other noted morphologically divergent features included differences in the number of vertebrates and the number of stripes that run along the lizard’s body. 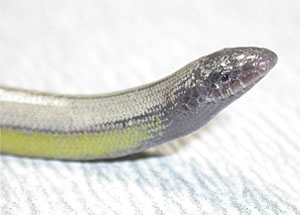 The proposed names for the new species are A. alexanderae, A. campi, A. grinnelli and A. stebbinsi. These names were chosen to honor four renowned UC Berkeley scientists including museum founder Joseph Grinnell, paleontologist Charles Camp, philanthropist and amateur scientist Annie Alexander and herpetologist Robert Stebbins.

The conservation status of the new species is not well known and needs to be studied further, the scientists say. While one of the new species was discovered on a protected preserve, several of the other species live in fragile habitats that are being threatened by urban and agricultural development. Two of the three vacant lots where the purple-bellied lizard A. grinnelli was found, have already been bulldozed and developed.

The research was conducted by Theodore Papenfuss, a herpetologist with the Museum of Vertebrate Zoology at the University of California, Berkeley, and James Parham, curator of paleontology at the John D. Cooper Archaeology and Paleontology Center at California State University. The findings were published in the September 2013 issue of Breviora.

Bottom line: Scientists have discovered four new species of legless lizards living among fragile landscapes in California. The findings were published in the September 2013 issue of Breviora.

Frogs that hear with their mouth

This bird was unknown to science