The new elements – elements 113, 115, 117 and 118 – complete the periodic table’s seventh row and make science textbooks around the world instantly out-of-date. 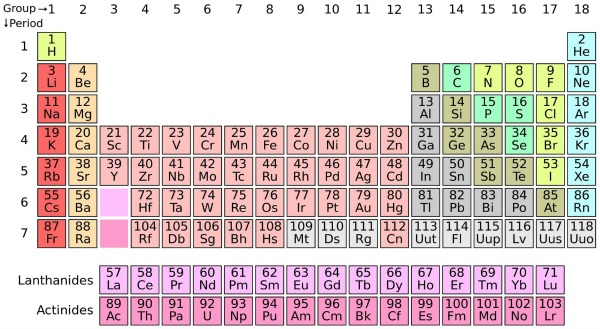 In an event likely never to be repeated, four new superheavy elements were last week simultaneously added to the periodic table. To add four in one go is quite an achievement but the race to find more is ongoing.

Back in 2012, the International Unions of Pure and Applied Chemistry (IUPAC) and Pure and Applied Physics (IUPAP) tasked five independent scientists to assess claims made for the discovery of elements 113, 115, 117 and 118. The measurements had been made at Nuclear Physics Accelerator laboratories in Russia (Dubna) and Japan (RIKEN) between 2004 and 2012.

Late last year, on December 30, 2015, IUPAC announced that claims for the discovery of all four new elements had been accepted.

This completes the seventh row of the periodic table, and means that all elements between hydrogen (having only one proton in its nucleus) and element 118 (having 118 protons) are now officially discovered.

After the excitement of the discovery, the scientists now have the naming rights. The Japanese team will suggest the name for element 113. The joint Russian/US teams will make suggestions for elements 115, 117 and 118. These names will be assessed by IUPAC, and once approved, will become the new names that scientists and students will have to remember.

Until their discovery and naming, all superheavy elements (up to 999!) have been assigned temporary names by the IUPAC. Element 113 is known as ununtrium (Uut), 115 is ununpentium (Uup), 117 is ununseptium (Uus) and 118 ununoctium (Uuo). These names are not actually used by physicists, who instead refer to them as “element 118”, for example.

Elements heavier than Rutherfordium (element 104) are referred to as superheavy. They are not found in nature, because they undergo radioactive decay to lighter elements.

Those superheavy nuclei that have been created artificially have decay lifetimes between nanoseconds and minutes. But longer-lived (more neutron-rich) superheavy nuclei are expected to be situated at the centre of the so-called “island of stability”, a place where neutron-rich nuclei with extremely long half-lives should exist.

Currently, the isotopes of new elements that have been discovered are on the “shore” of this island, since we cannot yet reach the centre.

How were these new elements created on Earth?

Atoms of superheavy elements are made by nuclear fusion. Imagine touching two droplets of water – they will “snap together” because of surface tension to form a combined larger droplet.

The problem in the fusion of heavy nuclei is the large numbers of protons in both nuclei. This creates an intense repulsive electric field. A heavy-ion accelerator must be used to overcome this repulsion, by colliding the two nuclei and allowing the nuclear surfaces to touch.

This is not sufficient, as the two touching spheroidal nuclei must change their shape to form a compact single droplet of nuclear matter – the superheavy nucleus.

It turns out that this only happens in a few “lucky” collisions, as few as one in a million.

There is yet another hurdle; the superheavy nucleus is very likely to decay almost immediately by fission. Again, as few as one in a million survives to become a superheavy atom, identified by its unique radioactive decay.

Finding the three atoms of element 113 in Japan took 10 years, and that was after the experimental equipment had been developed.

The payback from the discovery of these new elements comes in improving models of the atomic nucleus (with applications in nuclear medicine and in element formation in the universe) and testing our understanding of atomic relativistic effects (of increasing importance in the chemical properties of the heavy elements). It also helps in improving our understanding of complex and irreversible interactions of quantum systems in general.

The race to make more elements

The race is now on to produce elements 119 and 120. The projectile nucleus Calcium-48 (Ca-48) – successfully used to form the newly accepted elements – has too few protons, and no target nuclei with more protons are currently available. The question is, which heavier projectile nucleus is the best to use.

To investigate this, the leader and team members of the German superheavy element research group, based in Darmstadt and Mainz, recently travelled to the Australian National University.

They made use of unique ANU experimental capabilities, supported by the Australian Government’s NCRIS program, to measure fission characteristics for several nuclear reactions forming element 120. The results will guide future experiments in Germany to form the new superheavy elements.

It seems certain that by using similar nuclear fusion reactions, proceeding beyond element 118 will be more difficult than reaching it. But that was the feeling after the discovery of element 112, first observed in 1996. And yet a new approach using Ca-48 projectiles allowed another six elements to be discovered.

Nuclear physicists are already exploring different types of nuclear reaction to produce superheavies, and some promising results have already been achieved. Nevertheless, it would need a huge breakthrough to see four new nuclei added to the periodic table at once, as we have just seen.