There was more Arctic sea ice this summer than last. That is true. And yet 2013’s summertime Arctic ice melt was still greater than the long-term average.

Arctic sea ice tends to reach a minimum in mid-September each year, and, over the past several weeks, there have been a few articles circulating via social media about the extent of Arctic sea ice in 2013. These articles note something that is true: there is substantially more ice in the Arctic this year than observed at sea ice minimum last year. The articles, however, draw a mistaken conclusion that 2013’s greater sea ice extent (in contrast to 2012) means our climate is warming no more. In this post, I’ll analyze the melting that is occurring in the Arctic in 2013. As you probably know, when it comes to analyzing climate features, you have to look over a series of decades instead of one year to understand out the true state of Arctic sea ice extent in 2013. Click the links below to learn more about Arctic sea ice in the summer, and about 2013’s ice extent.

FACT #1. More ice this year than last does not mean the climate is now cooling.

FACT #4. Arctic sea ice in the summer was down this year, in contrast to the long-term average. 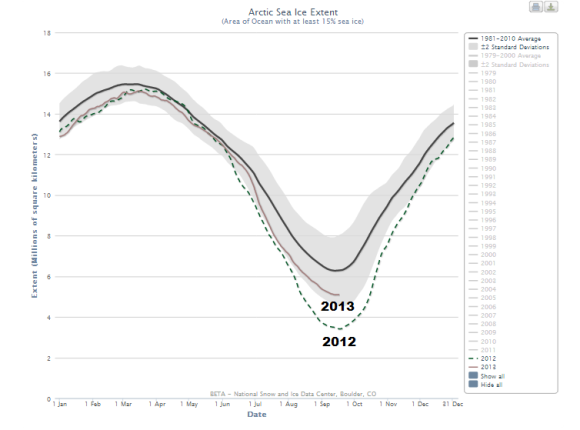 Let me just give you an example of what I’m talking about. In the Daily Mail on September 7, I saw an article titled And now it’s global COOLING! Record return of Arctic ice cap as it grows by 60% in a year.

FACT #1. More ice this year than last does not mean the climate is now cooling. In fact, in the latest climate summary released by the National Climatic Data Center, the globe recorded its fifth-warmest June-through-August period since records began being kept, and the average global temperature for the year so far ranks as the sixth-warmest, tied with 2003. On top of that, global ocean temperatures tied with 1998 and 2005 for the warmest level on record for the month.

As we’ve all heard many times now, local weather is not climate. Even if you personally experienced temperatures below average for the month or even throughout the summer, that doesn’t mean the rest of the globe saw cooler temperatures. Climate trends fluctuate in a complicated way, from place to place across the globe each year. To understand that Earth is, indeed, still warming, you have look at long-term trends, not short-term statistics.

After all, extremes are … extreme. It is difficult to match or beat them a year later. According to Dana Nuccitelli from the Guardian, scientists suspected ice extent in the Arctic would be larger this year than last year:

The reason so many climate scientists predicted more ice this year than last is quite simple. There’s a principle in statistics known as ‘regression toward the mean,’ which is the phenomenon that if an extreme value of a variable is observed, the next measurement will generally be less extreme. In other words, we should not often expect to observe records in consecutive years. 2012 shattered the previous record low sea ice extent; hence ‘regression towards the mean’ told us that 2013 would likely have a higher minimum extent. 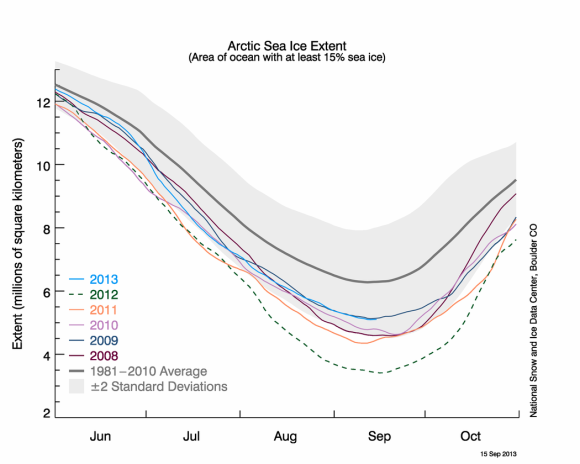 Arctic sea ice melt over the past five years. Melt in 2013 has been less than the previous years thanks to cooler temperatures in the Arctic for the majority of the melting season. Image Credit: NSIDC

FACT #3. Earth’s climate is complex, and highly variable. For example, 2012 was a rare year as we saw unusual blocking patterns and a strong storm that helped accelerate the melting of the ice in the Arctic. This year, we did not see a similarly large storm to cause increased Arctic melting. The rate of ice melt and growth is based on the year-to-year variability of many different weather patterns. For instance, temperatures, cloud cover, storms, and directions and speeds of winds can influence how ice can melt or grow.

Sea ice extent has its own melting and growing season, too. For instance, ice typically begins to melt in April and bottoms out before the end of September. October through March is the period where sea ice grows due to the colder months.

So cherry-picking weather or climate data can lead to wrong conclusions. The Daily Mail, for example, published their article about the enhanced sea ice growth in early September. Would they have written it differently if they’d waited until after the first two weeks of September, when temperatures were above average, leading to a faster-than-average rate of ice melt in the Arctic for the final weeks of the melting season? 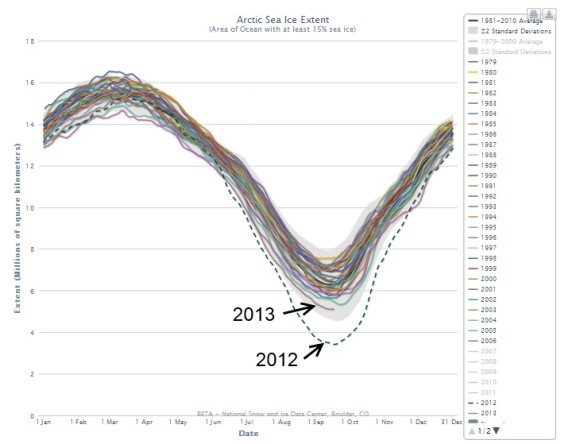 FACT #4. Arctic sea ice in the summer was down this year, in contrast to the long-term average. The image above provides a great visual example of how much melt the Arctic has experienced over the past several decades. Since we measure sea ice extent from satellite records, we have to start with 1979, the year these records began being kept. In the image above, I have highlighted sea ice growth and melt from 1979 all the way through 2006. I have also pointed out this year compared to last year’s extreme ice melt. As you can see, 2013 is well below all of the records from 1979-2006. However, sea ice melt is smaller in 2013 than it was in 2007, 2008, 2010, 2011, and 2012. 2009 was a year that featured similar melt as 2013. And of course 2009 was followed a few years later by 2012, the lowest ice extent on record. As you can easily see, the past decade has seen melt much larger than what we’ve experienced since 1979.

In 2012 we saw a record low, which was likely to have been influenced by a storm that swept through the region in summer, but this year’s weather conditions appear to have been less conducive to ice loss. We know sea ice extent is going to vary from year to year due to weather conditions and that’s not at all inconsistent with the overall decline in extent. You wouldn’t expect to see records broken year after year, so this ‘recovery’ is not unexpected. In fact, model simulations of sea ice suggest that a as the ice gets thinner you actually get more year-to-year variability in extent because larger areas of the ice are more vulnerable to melting away completely over the summer.

Bottom line: Although sea ice extent has been greater in summer 2013 than in the past few summers, this year’s Arctic sea ice extent does not suggests to scientists that Earth’s climate has stopped warming, or that this trend of growing ice is bound to continue. If you look at the rate of sea ice melt since 1979, the trend continues to show a steep decline. Research and peer-reviewed data will continue on the subject of how sea ice melt can affect the global climate and what it could mean for years to come.