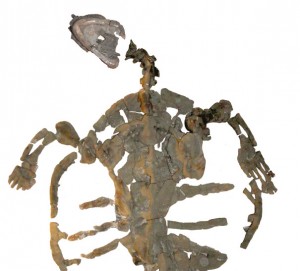 The skeleton of the fossil sea turtle
is almost 2 feet long. © PaleoBios / Cadena
“Those of us as Desmatochelys padillai sp. Turtle described comes from Cretaceous sediments and is at least 120 million years old,” said Cadena. Sea turtles are descendants of the enstandenen ago 230 million years land or freshwater turtles. During the Cretaceous period there was a split in land and sea creatures; However, fossil evidence from this period are very sparse and the exact time difficult to understand. “The more important every fossil sites, which may help to clarify the phylogeny of sea turtles,” said the Colombian turtle expert.

Thank you! Your submission has been received!
Oops! Something went wrong while submitting the form.
END_OF_DOCUMENT_TOKEN_TO_BE_REPLACED