For the U.S., summer 2012 was third-hottest in history

Meanwhile, the past 12 months (September 2011-August 2012) are the warmest 12 months ever recorded for the contiguous United States.

August provided an average temperature of 74.4 degrees Fahrenheit, which was 1.6°F above the 20th century average, marking this August the 16th warmest August in a period of record that dates back to 1895. The Central U.S., Ohio Valley, and the U.S. Southeast regions of the contiguous United States experienced at or below-average temperatures for the month of August. According to the NCDC, 4,200 daily warm temperature records broken or tied during August, and just over 2,000 daily cool temperature records broken or tied.

In general, the western United States experienced hot and dry conditions that helped fuel wildfires throughout the region. Nearly 3.6 million acres burned nationwide, and acreage burned was nearly twice the August average and the most in the 12-year period of record.

When you look at the average temperatures for every August in the contiguous United States since record keeping began back in 1895, you can see a very obvious trend. The overall temperatures are slowly getting warmer throughout each decade. It is important never to focus on a particular region within the U.S. when it comes to looking at climate trends. You will see spikes of above and below average temperatures in parts of the Southeast/Pacific Northwest. Climate looks at a much bigger picture – such as the whole United States, or the entire Northern or Southern Hemisphere. In general, warming continues as the dominant climate story on Earth today. 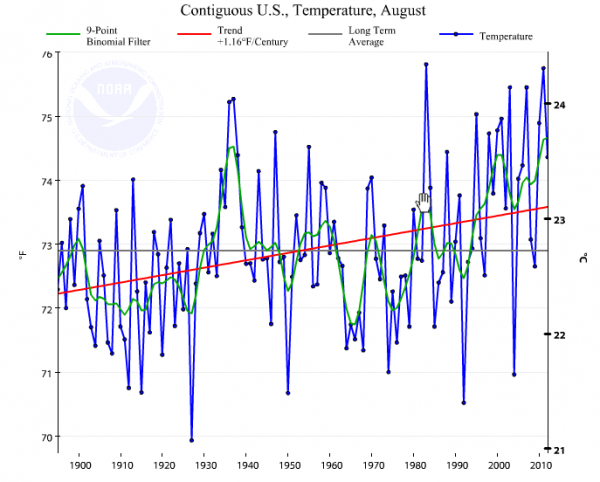 Contiguous United States temperatures in Augusts that date back as far as 1895. Image Credit: NCDC/NOAA

In August 2012, 55.1% of the contiguous U.S. was in moderate to extreme drought, a decrease of about 3% compared with July 2012. The percent area in severe-to-extreme drought increased to 39.0%, indicating that the drought has intensified. The 2012 values have been exceeded only by the droughts of the 1930s and 1950s. According to the September 4, 2012 Drought Monitor, 63.39% of the country is experiencing moderate to exceptional drought. Hurricane Isaac helped out portions of Arkansas, Illinois, Missouri, Tennessee, and Indiana with the drought, with many areas dropping from D3-D4 drought (extreme to exceptional) to D2-D3 drought levels (severe to extreme). Although these areas benefited from the extra rains, these areas could still use a lot more rain.