Footage of a tornado in Okawville, Illinois

A tornado near Okawville in southern Illinois on Tuesday, September 25, pulled roofs off barns and knocked over semis on I-64.

On September 25, 2012, strong storms developed in the heart of the United States across Oklahoma, Kansas, Missouri, and Illinois. In fact, in southern Illinois, some of the ingredients were just perfect enough to produce a few tornadoes. The cities of Okawville, Damiansville, and Addieville witnessed the sighting of a tornado that crossed Interstate 64. There were reports from the Storm Prediction Center that mentioned semis being blown over, farm roofs being damaged and torn off, damaging to siding, and garage doors caved in. There were two reports of people being injured from this tornado as it crossed Interstate 64 flipping over the semis. As of now, it is unknown as to how strong this tornado was, but based on the overall looks of it, it was not a strong tornado (EF-3 or greater). 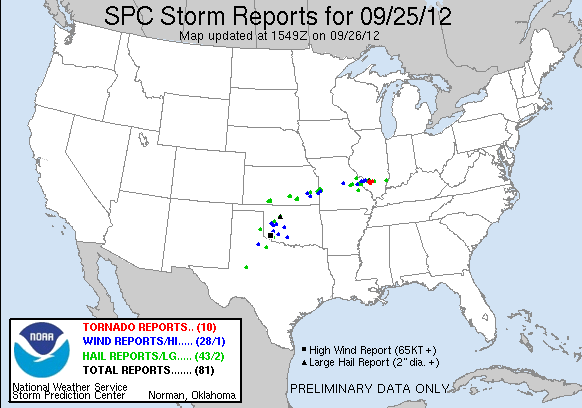 There were a total of 10 tornado reports across southern Illinois on Tuesday, September 25, 2012. Image Credit: Storm Prediction Center

Here is some footage taken on September 25, 2012 near Okawville, Illinois by youtube user “tbbluedragon1717”.

A stalled out front across the Midwestern United States are what triggering the thunderstorms across the region. Although these areas saw 81 preliminary storm reports, the good news is that they actually saw beneficial rains. Out of all of the regions in the United States, the Mid-West and High Plains is experiencing the worse drought conditions with many areas seeing severe to exception drought. These storms will eventually push southward later this week and affect parts of the southern and eastern coast of the United States. Organized severe weather does not appear to be likely after today, and many areas will see a chance of a mix of showers and thunderstorms. 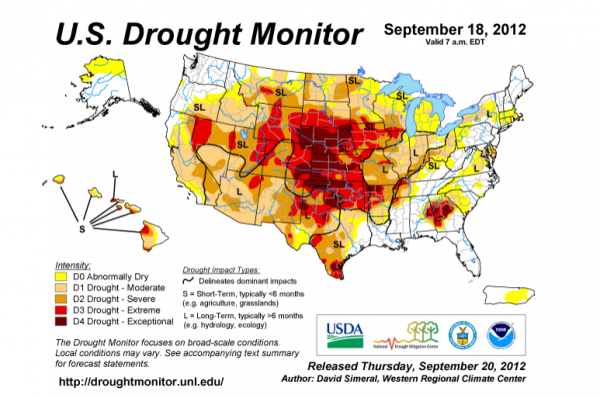 The latest drought indicator shows 64.82% of the country in a drought. Image Credit: U.S. Drought Monitor

Bottom line: A tornado developed in southern Illinois near Okawville that flipped semis, damaged roofs, and removed shingles off roofs. Two people were injured from this storm as semis were flipped over as the tornado crossed Interstate 64. Organized severe weather looks unlikely for the rest of the week, although there could be a few strong storms developing in Kentucky, West Virgina, Texas, Oklahoma, and Kansas today (Wednesday, September 26, 2012).