It looks like a modern-day crow, but it’s an 120 million year old four-winged dinosaur called a Micrropator.

It looks like a modern-day crow, but it’s an 120 million year old four-winged dinosaur called a Microraptor. 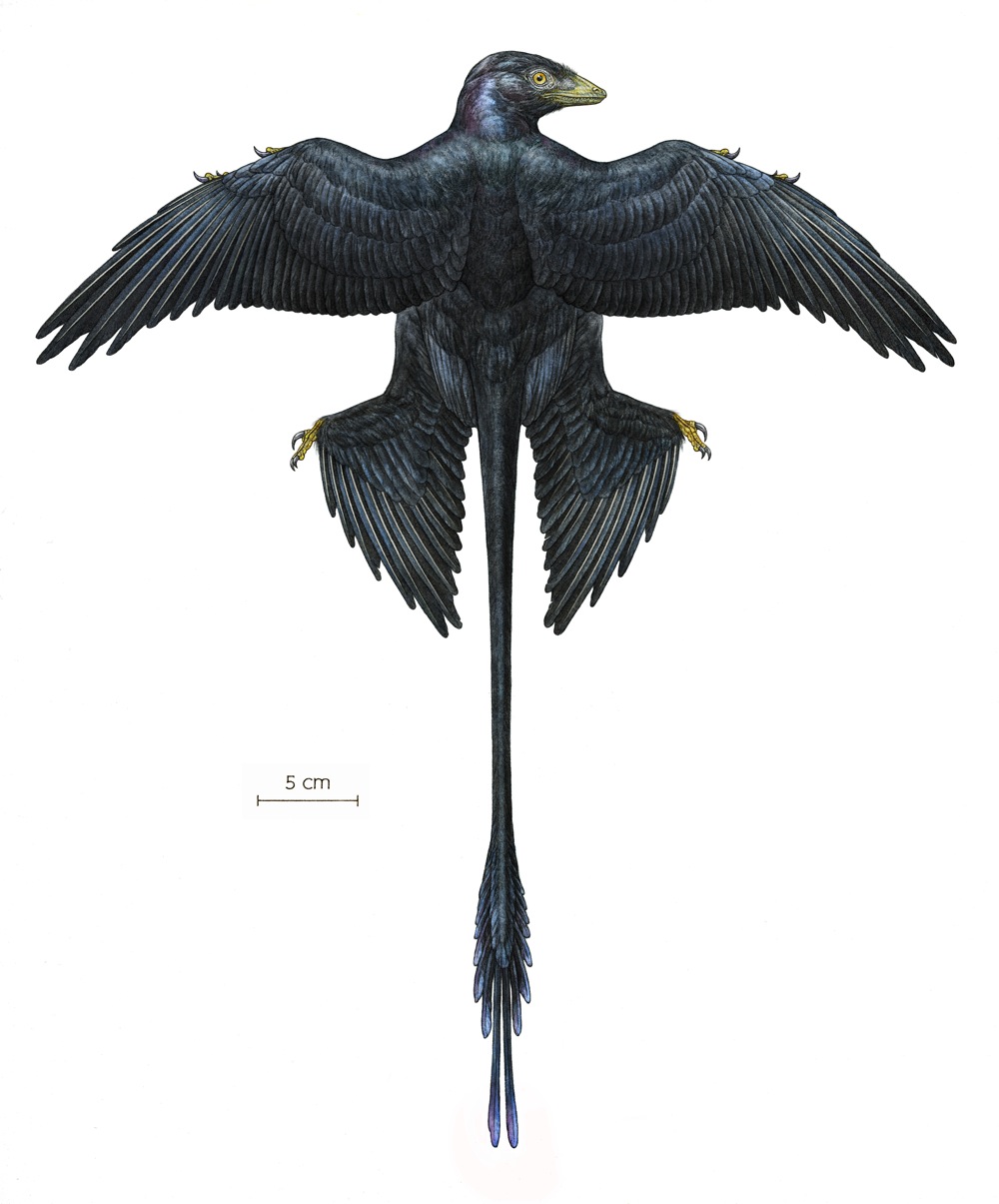 Reconstruction of Microraptor based on new specimen and overlays of previous specimens. Image Credit: Mick Ellison/AMNH

To determine the color of the Microraptor’s feathers, the researchers compared the patterns of pigment-containing organelles from a Microraptor fossil to those in modern bird. They also determined that the dinosaur’s plumage was iridescent with a glossy sheen like the feathers of a modern crow.

Since it was discovered as the first four-winged dinosaur in 2003, Microraptor has been at the center of questions about the evolution of feathers and flight.

Once thought to be a broad, teardrop-shaped surface, or with a shape more like that of a paper airplane meant to help generate lift, Microraptor’s tail fan is actually much narrower with two elongate feathers off its tip.

The researchers believe the tail feathering may have been ornamental, and likely evolved for courtship and other social interactions and not as an adaptation for flight. 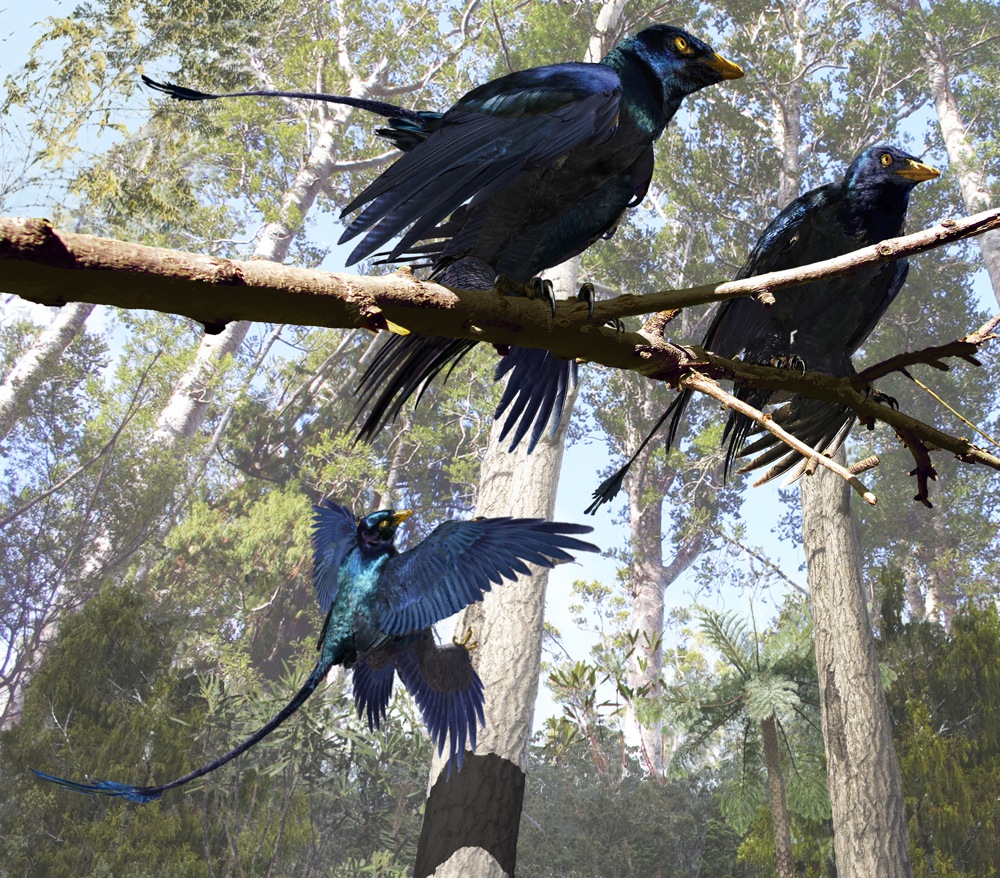 Julia Clarke is a paper co-author and paleontologist at The University of Texas at Austin. She said:

Most aspects of early dinosaur feathering continue to be interpreted as fundamentally aerodynamic, optimized for some aspect of aerial locomotion.

Some of these structures were clearly ancestral characteristics that arose for other functions and stuck around, while others may be linked to display behaviors or signaling of mate quality.

But, as any birder will tell you, feather colors and shapes may also be tied with complex behavioral repertoires and, if anything, may be costly in terms of aerodynamics.

Modern birds use feathers for many different things, ranging from flight to thermoregulation to mate-attracting displays, said Matt Shawkey, a paper co-author and biologist at the University of Akron. He said: 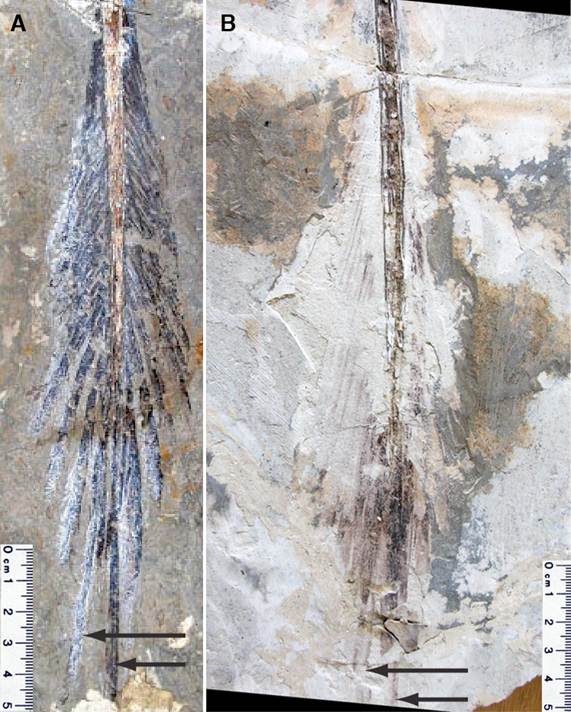 Iridescence is widespread in modern birds, and is frequently used in displays. The evidence that Microraptor was largely iridescent suggests that feathers were important for display even relatively early in their evolution.

Information on the feather color of a variety of dinosaurs has recently come to light.

Based on the new data from Microraptor and other findings, a complex color repertoire that includes iridescence is likely ancestral to a group of dinosaurs called Paraves that originated at least 140 million years ago. It includes dinosaurs like Velociraptor as well as Archaeopteryx, Anchiornis and living birds.

Bottom line: A March 2012 report in the journal Science describes the feathers of the Microraptor, a four-winged dinosaur that lived 120 million years ago. The Microraptor’s tail was narrow and adorned with a pair of streamer feathers, which suggests the importance of display in the early evolution of feathers, say scientists.