It dates back approximately 115 million years and reveals a prehistoric bird with long tail feathers, a first-of-its-kind find for South America. 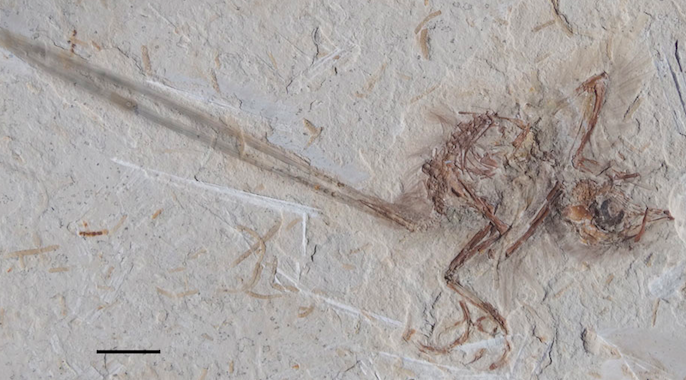 Scientists have discovered a bird fossil in the Araripe Basin of northeastern Brazil, now believed to be the oldest bird ever found in the country. According to the findings published this month (June 2, 2015) in Nature Communications, the fossil dates back to the Cretaceous Period, approximately 115 million years ago. This unique animal is so well preserved that its long tail feathers may have retained their original color and spots. It’s a first-of-its-kind find for South America, and, the scientists say:

This evidence currently constitutes the most informative source to understand the early evolution of bird feathers.

Bird fossils from the Cretaceous Period, the last and longest epoch of the Mesozoic Era, are sparse. Preserved birds with feathers are extremely rare with a number of previous skeletal remains flattened with poorly preserved feathers. Until now the best specimens of early birds have been found in China in two-dimensional slabs.

Paleontologists Ismar Carvalho and Fernando Novas of the Federal University of Rio de Janerio found the new fossil, which retains its three-dimensional shape, giving researchers an exquisite look at its unique plumage. Filamentous feathers – sometimes called “protofeathers,” as there is disagreement over whether they are true feathers as we know them today – cover the currently unnamed specimen. It has 10 secondary remiges, or flight feathers, anchored to the forearm.

The most interesting feature of this hummingbird-sized animal are the long ribbon-like tail feathers, measured to be 30 percent longer than the length of the main skeleton. The fossil is so well preserved that scientists can distinguish five spots from the original tail feathers, along with remnants of an ornamental color pattern.

Click here to read more about the evolution of feathers. 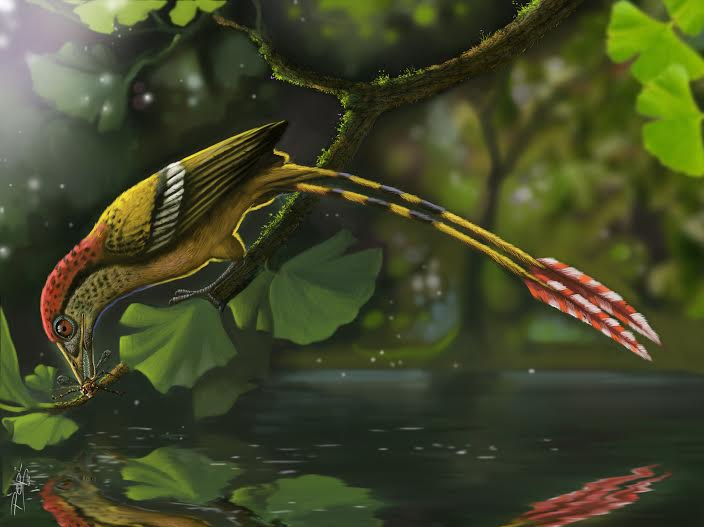 Reconstruction of bird that made the Araripe Basin Fossil. Illustration by Deverson Pepi. Image via PBS.org

Curiously, the elongated ribbon-like tail feathers seen on this fossil are unknown in living birds, making it difficult for scientist to interpret their function. The ribbon feathers are anatomically different from modern tail-feathers, which today’s birds use for body balance.

Other examples of complex plumage, such as the Confuciusornis, have been found in China, however. Researchers agree that these structures were likely sexually dimorphic – that is, different in appearance between males and females of the same species. The structures were likely associated with sexual display or visual communication.

The Araripe Basin has yielded a variety of well-preserved fossils from a number of plants and animals, creating one of the best-known terrestrial ecosystems for the early Cretaceous Period. This area was a vibrant lakebed 145 to 66 million years ago, with numerous fossil discoveries of insects, reptiles, and bony fish.

This latest discovery provides deeper insight into this area’s ancient ecosystem, and sparks further investigation of the evolutionary split between modern day birds and their dinosaur ancestors.

The discoverers, Ismar Carvalho and Fernando Novas, describe the fossil discoveries of the Araripe Basin, including the new bird fossil, in the video below.

Bottom line: Scientists report an unusual bird fossil found in the Araripe Basin of northeastern Brazil, which has yielded many other well-preserved fossils of plants and animals. The new fossil – which shows long tail feathers – is now believed to be the oldest bird fossil ever found in Brazil, and its a first-of-its-kind find for South America.