Here are the first ever photos of the Myanmar snub-nosed monkey, a species new to science, discovered by conservationists in 2010.

Camera traps caught these images of the monkeys in the high, forested mountains of Kachin state, bordering China. 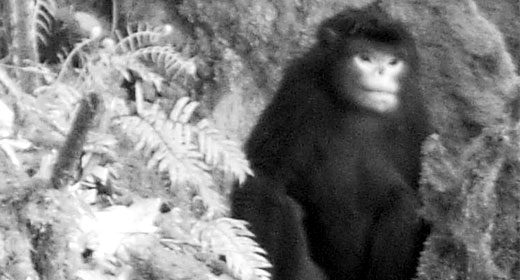 The Myanmar snub-nosed monkey was described scientifically in 2010 from a dead specimen collected from a local hunter. And although local people claim that these monkeys are easy to find in the rain, because they often get rainwater in their upturned noses, causing them to sneeze – no scientist has seen a live individual.

Heavy snows in January and constant rain in April made expeditions to set the camera traps difficult. Jeremy Holden, who led the camera trapping team, said:

We were dealing with very tough conditions in a remote and rugged area that contained perhaps fewer than 200 monkeys. We didn’t know exactly where they lived, and I didn’t hold out much hope of short term success with this work.

But in May a small group of snub-nosed monkeys walked past one of the cameras and into history. 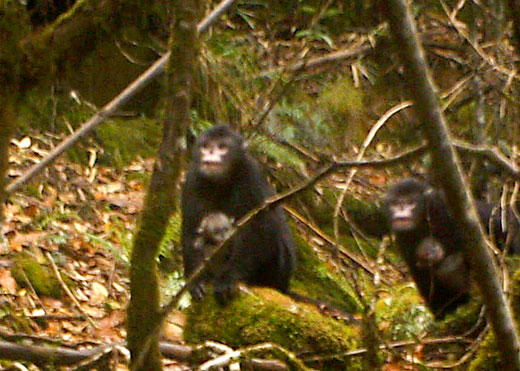 We were very surprised to get these pictures. It was exciting to see that some of the females were carrying babies – a new generation of our rarest primate.

As with most of Asia’s rare mammals, the snub-nosed monkey is threatened by habitat loss and hunting. The team is now working together with the Ministry of Environmental Conservation and Forest (MOECAF), local authorities and communities to help safeguard the future of the species.

Find out more at physorg