The fabled quinary or 5th order rainbow is made by sunlight reflected five times inside raindrops. Now, for the first time, we have an image of one. 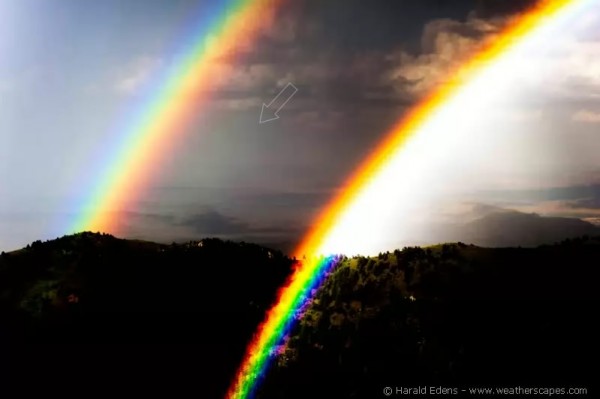 The familiar primary and secondary rainbows have been known since there were eyes. The long sought 3rd and 4th order rainbows were finally imaged in 2011. Now we have the 5th order!

Harald Edens’ discovery image was taken on August 8, 2012 from the Langmuir Laboratory for Atmospheric Research near the 10,800-foot summit of South Baldy Peak, New Mexico, USA. This is the first-ever image on which the 5th order rainbow is positively identified. This version is considerably enhanced. The raw camera image is here (link to image). 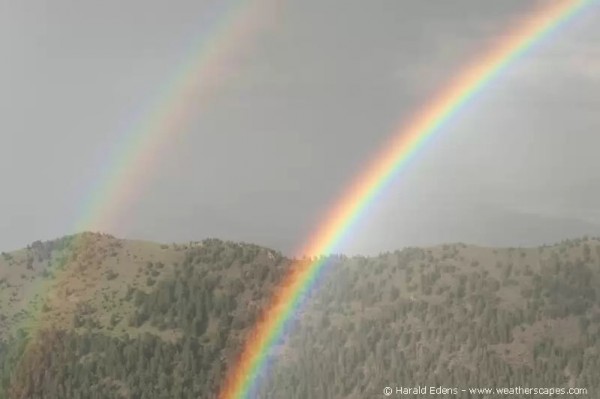 The fabled quinary or 5th order rainbow is made by sunlight reflected five times inside raindrops. We see only its broad greens tending to blue towards the primary bow. Its yellows and reds are hidden behind the secondary bow.

Harald has now photographed the 5th order several times. He ascribes his success to the very bright rainbows formed locally from small thunderstorms and to the exceptionally clear high altitude low density air. Astute observation over many years by an atmospheric optics expert also helps somewhat! His scientific account will be published in the Journal of Applied Optics.

More about it on Optics Picture of the Day, from the website Atmospheric Optics

Les Cowley is publisher of the very popular website Atmospheric Optics (https://www.atoptics.co.uk). He is a specialist in the both atmospheric optics and meteorological optics, and in the subjects of optical effects, light and color in nature, rainbows, halos, glories, green flashes and more. By training, he's a chemical physicist and has researched intermolecular forces, dynamics of chemical reactions and combustion phenomena. But on one winter’s afternoon in the 1970s he was dragged outside from all that to see an ice halo display. The sky was seemingly webbed and criss-crossed with delicate arcs. He did not know their names nor how they had formed but he was hooked. He now researches atmospheric phenomena and spreads this once-esoteric interest via websites and writings.