Researchers identified simple behavioral rules that allow these tiny creatures to collaboratively build elaborate structures – rafts and towers – with no one in charge. 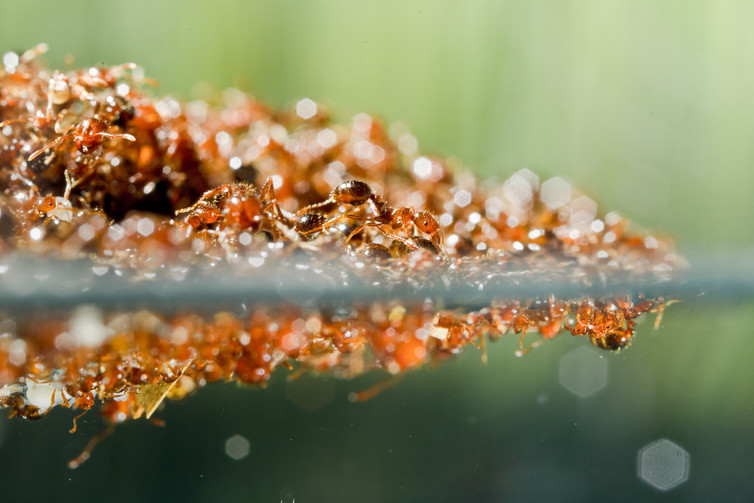 How do they each know what to do? Image via Tim Nowack.

Drop a clump of 5,000 fire ants in a pond of water. In minutes the clump will flatten and spread into a circular pancake that can float for weeks without drowning the ants.

Drop the same clump of ants near a plant on solid ground.

They’ll climb atop each other to a form a solid mass around the plant stem in the shape of the Eiffel Tower – sometimes as high as 30 ants tall. The ant tower serves as a temporary encampment that repels raindrops. 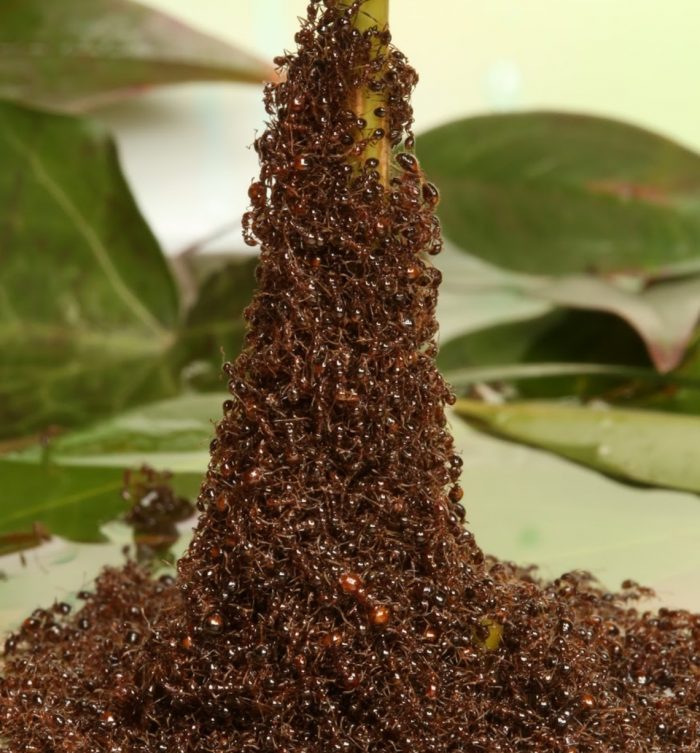 Hundreds of thousands of ants creating a tower together – but how? Image via Candler Hobbs, Georgia Tech.

How and why do the ants make these symmetrical but very different shapes? They depend on touch and smell – not sight – to perceive the world, so they can sense only what’s very close to them. Contrary to popular belief, the queen doesn’t issue orders to the colony; she spends her life laying eggs. Each ant controls itself, based on information gathered from its immediate vicinity.

As both a systems engineer and biologist, I’m fascinated by the ant colony’s effectiveness in diverse tasks, such as foraging for food, floating on water, fighting other ants and building towers and underground nests – all accomplished by thousands of purblind creatures whose brains have less than one ten-thousandth as many neurons as a human’s.

In earlier research, my colleague David Hu and I investigated how these tiny creatures weave their bodies into water-repellent lifesaving rafts that float for weeks on flood waters.

Now we wanted to understand how the same ants coordinate to assemble into a completely different structure on land – a tower made of as many as hundreds of thousands of living fire ants.

How supportive are fire ants?

Half the ants here in Georgia are fire ants, Solenopsis invicta. To collect our lab subjects, we slowly pour water into an underground nest, forcing the ants to the surface. Then we capture them, take them to the lab, and keep them in bins. After some painful bites we learned to line the bins with baby powder to prevent their escape. 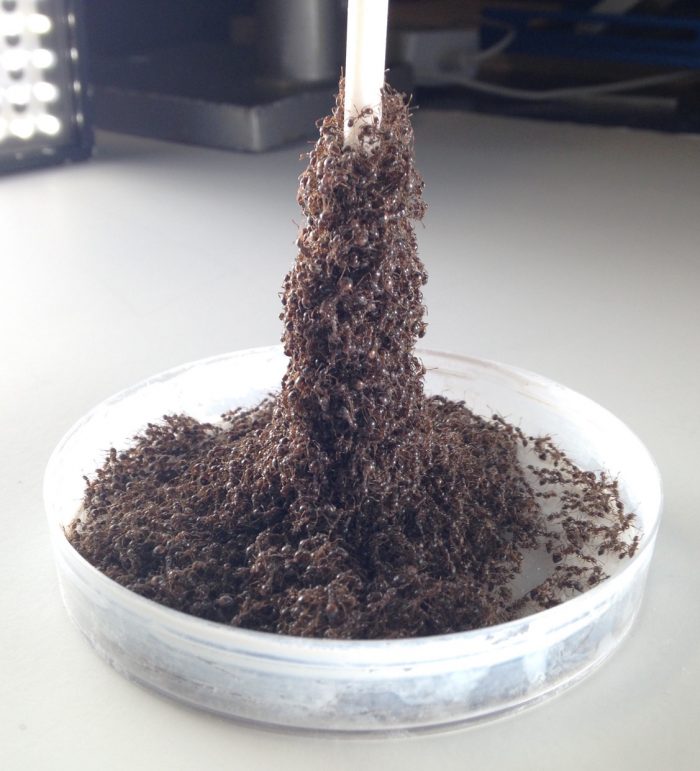 Fire ants forming a tower around a narrow pole. Image via Georgia Tech.

To trigger their tower building, we put a clump of ants in a petri dish and simulated a plant stem with a small vertical pole in the center. The first thing we noticed about their tower was that it was always narrow at the top and wide at the bottom, like the bell of a trumpet. A pile of dead ants is conical. Why the bell shape?

Our first guess, that more ants were needed toward the bottom to support more weight, proved accurate. To be precise, we hypothesized that each ant is willing to support the weight of a certain number of other ants, but no more.

Later, we learned that architect Gustave Eiffel used the same principle of equal load-bearing for his famous tower.

Ring around the pole

Next we asked how fire ants build the tower. Of course they’re not doing the math that would tell them how many ants need to go where to create this distinctive shape. And why does it take them 10 to 20 minutes rather than the mere one or two minutes needed to build a raft? This took us seven trial hypotheses over two frustrating years to answer.

Watch the ants build a tower in real time.

Although we think of a tower as made of horizontal layers, the ants don’t build the tower by completing the bottom layer and adding one complete layer at a time. They can’t “know” in advance how wide the bottom layer must be. There isn’t any way for them to count how many ants there are, much less to measure a layer’s width or calculate the necessary width.

Instead, ants scurrying about on the surface get attached and thereby thicken the tower at all layers. The top layer is always formed atop what had just previously been the top layer. Being the narrowest, it consists of a ring of ants around the pole, each gripping its two horizontally adjacent ants.

Our key observation was that if a ring does not completely encircle the pole, it doesn’t support other ants that are trying to build another ring on top of them. After measuring ant grip and adhesion strengths, we analyzed the physics of the ring and determined that a complete ring is 20 to 100 times more stable than an incomplete one. It looked like ring formation might be the bottleneck for tower growth.

This hypothesis gave us a testable prediction. A larger-diameter pole has more ring places to be filled, so its tower should grow more slowly. To get a quantitative prediction, we mathematically modeled the ant movements as being in random directions for a distance of about a centimeter – the same as in our model of ant movement for ant raft formation.

Then we filmed closeups of ants moving into places on the ring. Based on over 100 data points, we got strong confirmation of our model of ring-filling. When we ran tower-building experiments with a range of pole diameters, sure enough, the towers grew more slowly around larger-diameter poles, at rates that matched our predictions fairly well.

There was one big surprise to come. We thought that once the tower was complete, that was all there was. But in one of our experimental trials, we accidentally left the video camera running for an extra hour after the tower had been built.

Then-Ph.D.-student Nathan Mlot was too good a scientist to just discard observational data. But he didn’t want to waste an hour watching nothing happen. So he watched the video at 10x normal speed – and what he saw was amazing.

Time-lapse video of an ant tower.

At 10x speed, the surface ants move so quickly they are a blur through which the tower underneath is visible, and the tower is slowly sinking. It happens much too slowly to discern at normal speed.

We observed the bottom tower layer from below through the transparent petri dish. The ants there form tunnels and gradually exit the tower. They then scurry about the tower surface until eventually they join a new top ring.

We couldn’t see the ants deep inside the tower. Is the entire tower or just its surface sinking? We suspected the former, as ants in clumps and rafts grip together as one mass.

We enlisted Daria Monaenkova, who had just invented a novel 3D X-ray technique. We doped some of the ants with radioactive iodine and tracked them. Every tracked ant in the tower sank.

X-ray photography reveals ants (black dots) walk up the sides of the tower, only to sink when they reach the column.

Perhaps the most remarkable implication of this research is that the ants don’t have to “know” whether they are all behaving the same way. Apparently they follow the same simple rules of movement: If ants are moving above you, remain in place. If not, move randomly, and stop only if you reach an unoccupied space adjacent to at least one stationary ant.

Once the tower is built, the ants circulate through it while preserving its shape. We were surprised; we thought the ants would stop building their tower once its height was maximal. Previously, when we studied the ant raft, we were surprised in the opposite way. We thought the ants would circulate through the raft so as to take turns being underwater on the bottom. Instead, ants on the bottom can stay in place for weeks.

Every living organism I’ve studied has turned out to be more complicated than it seemed at first. Understanding how simple rules can lead to elaborate and varied structures increases our respect for the power of evolution, and gives us ideas for how to design multi-functional self-assembling robot teams.

Craig Tovey, Professor of Industrial & Systems Engineering and Co-Director of the Center for Biologically Inspired Design, Georgia Institute of Technology