From fins to legs to fins again

Marine tetrapods, a group of animals including whales, dolphins, seals, and sea turtles, have moved from sea to land and back to the sea over the last 350 million years

Whales, dolphins, seals and sea turtles are members of an exceptional group of animals, called marine tetrapods, that have moved from the sea to the land and back to the sea again over the last 350 million years — each time making radical changes to their life style, body shape, physiology and sensory systems.

What made these animals return to the ocean? Neil Kelley is a researcher at the Smithsonian National Museum of Natural History’s department of paleobiology. Kelley told NPR:

They followed their stomachs into the ocean.

Kelley is the lead author of a new scientific review by scientists at the Smithsonian who have synthesized decades of scientific findings regarding the changes that these land species underwent in order to thrive in the marine environment. The study results are published in the April 17 issue of the journal Science.

Marine tetrapods represent a diverse group of living and extinct species of mammals, reptiles, amphibians and birds that all play, or have played, a critical role as large ocean predators in marine ecosystems past and present. 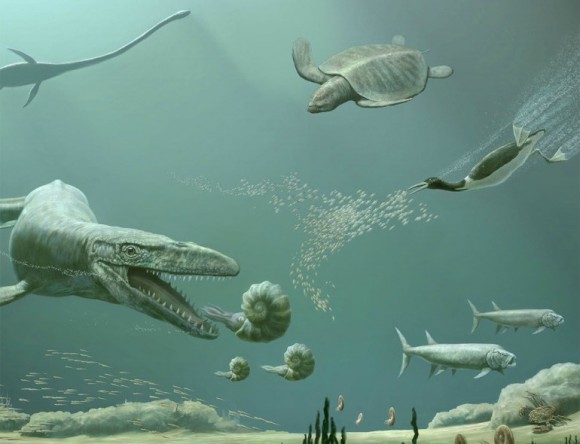 This marine scene shows an assortment of marine tetrapods that lived in Cretaceous oceans near the end of the “Age of Reptiles,” including a sea turtle, an early flightless marine bird, a large mosasaur and a long-necked elasmosaur. Image credit: Smithsonian/Karen Carr

The reverse migration of land animals back to the ocean began 250 million years ago, following the Great Permian Extinction, colloquially known as the Great Dying because it was the most severe mass extinction event known, with 96 percent of all marine species and 70 percent of land animals going extinct. Kelley said:

During this mass extinction event, it’s likely that food on land was actually maybe a bit harder to come by. There’s evidence for acid rain and global warming, things that were probably damaging ecosystems on land and the ocean. But we think that maybe coastlines provided a little bit of a refuge. These animals were living in coastal environments, eating seafood that washed up on the beach, and over time became more and more dedicated to living in the ocean. 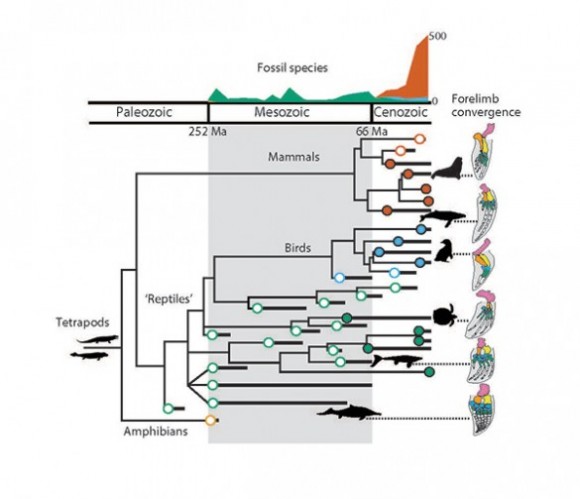 According to the paleobiologist, there is even evidence that some species may have been double dippers: They have transitioned between sea and land more than once. Kelley said:

Snakes are one example that comes to mind. There is evidence that they went through an early marine phase, when they still had legs. Since then different groups of snakes have repeatedly gone back into the ocean. So it may be that snakes are particularly prone to habitat switching.

Another possible example is the elephant, which scientists know is closely related to manatees and sea cows. Kelley said:

Some evidence suggests that early elephants were highly aquatic – but whether they ever ventured into the ocean or stuck to freshwater is unknown.

Today’s oceans are changing, largely from human activities, said Kelley. This study, he said, provides an evolutionary context for understanding how living species of marine predators might evolve and adapt to these changes.

Bottom line: A study in the the April 17, 2015 issue of Science examines the radical changes in life style, body shape, physiology and sensory systems in marine tetrapods as they moved from the sea to land and back to the sea again over the last 350 million years.