The February 2013 nor’easter brought feet of snow throughout the U.S. Northeast and killed at least 15 people. 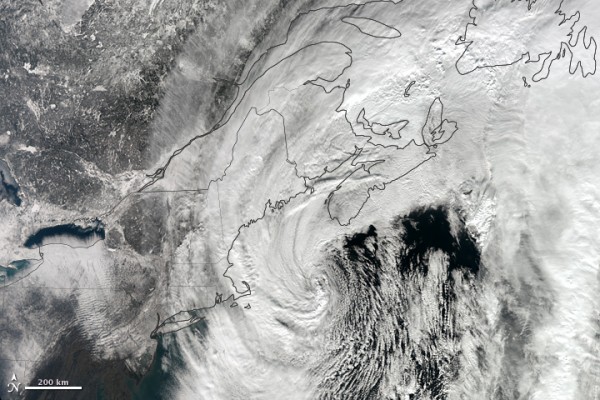 An extraordinary blizzard rapidly intensified on Saturday, February 9, 2013 and produced widespread snows that was measured in feet instead of inches in many areas. The U.S. states of Connecticut and Massachusetts were two of the worst hit from this blizzard. Several places experienced snowfall accumulations greater than two feet. Wind gusts were reported over hurricane strength (74 miles per hour) in various states such as Massachusetts, New Hampshire, and Connecticut. Storm surge mixed with blowing snow to cause a mess across the shoreline. At least 15 people died from this storm, which was named Winter Storm Nemo by the Weather Channel. Overall, this storm produced extraordinary amounts of precipitation across the region as it intensified off the coast of the U.S. Northeast. 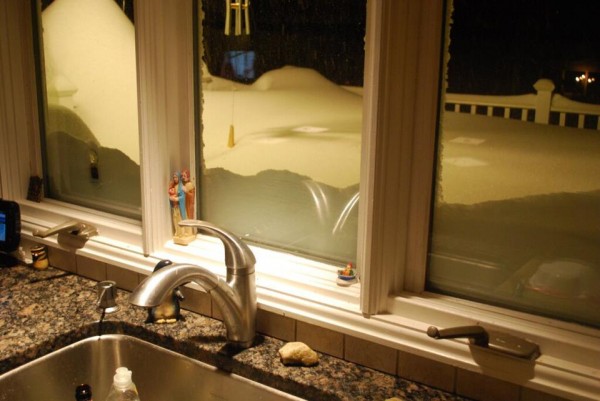 The snow made it above the kitchen window at this home in Connecticut where up to 40 inches fell. Image via Mary Schultz Breton

While we cannot compare the blizzard of 2013 to Hurricane Sandy, as they were two separate storms, we can look at satellite images to show what they looked like as they both impacted the Northeast. Hurricane Sandy developed in the Caribbean and pushed northward as a warm core system that eventually became extratropical and lost the characteristics of a hurricane. Meanwhile, the nor’easter developed due to a low pressure system off the Southeast U.S. coast pushing northward and phasing with another system in the northern tier of the United States. The system was never tropical, and was considered a mid-latitude cyclone. Here is a quiz: Can you guess which image is Sandy and which one is the blizzard of 2013? Winner receives bragging rights:

February 2013 nor’easter is on the left, and Hurricane Sandy is on the right. Image via NASA

Watch a time lapse video of the snow accumulating from a few inches to feet in 29 hours in Marlborough, Massachusetts:

Here is a list of snowfall totals that occurred across the U.S. Northeast via the Hydrometeorological Prediction Center (totals based on inches of snow): 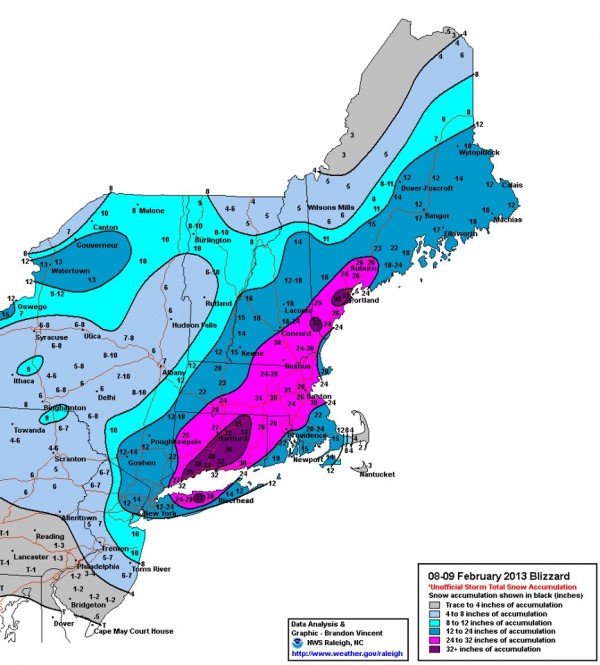 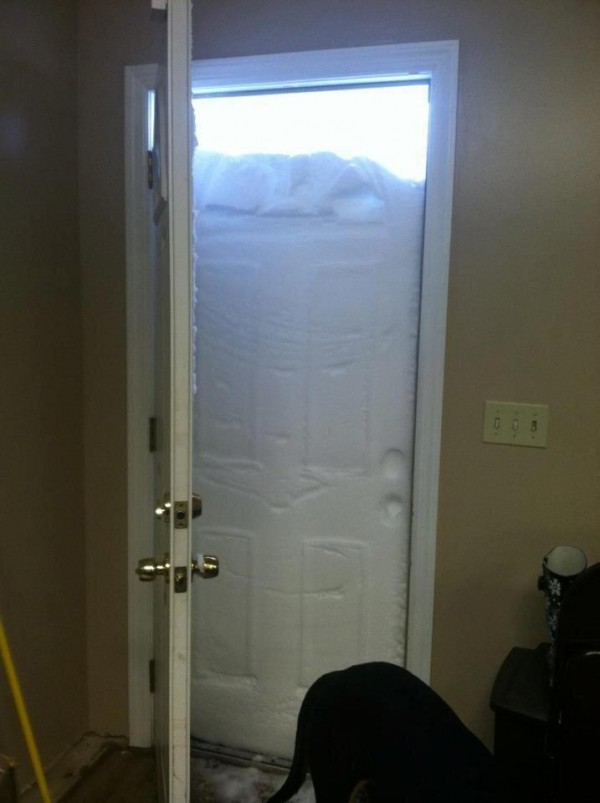 Not only was snowfall a huge story, but winds were quite high across the region. Westport, Connecticut recorded a 82 mph wind gust. Cuttyhunk, Massachusetts recorded a wind gust of 83 mph. Plum Island, New York recorded a wind gust of 75 mph. Meanwhile, most of the wind gusts were below hurricane force winds (73 mph or lower), but many place experienced gusts around 45-65 mph. The strong winds occurred thanks to the intensification of the nor’easter as it pushed to the northeast. According to Weather Underground, the nor’easter was the most intense winter storm event on record for southeastern Maine, and second most for Long Island, Connecticut, eastern Massachusetts, and perhaps Rhode Island Storm surge was estimated around two to four feet. The video below shows the power of this storm surge as it pushed ashore at Winthrop Beach.

Did climate change affect or enhanced the nor’easter? The simple answer to this question is that it is too early to say whether or not climate change could have directly or indirectly affected the nor’easter. You might find many online sources that would argue this idea, but the simple answer is that we cannot directly say climate change affected this storm. For us to determine that, we will need to do extensive research regarding the setup of this storm. Once we can get that research and have peer reviewed material, then we can perhaps determine whether or not climate change had some type of impact on this storm. Could the rising sea levels contribute to higher storm surges? Absolutely. It is important to note that snow is a part of weather, not climate. Snow occurs in the winter months, and blizzards do exist. It happens, and it is not unusual. The climate change aspects that are in question are how climate variability can enhance various impacts from storms that develop. Impacts can include sea level rise and storm surge.

Bottom line: A historic storm produced widespread amounts of snow across the Northeast with totals adding up to over three feet. Winds gusted over 70 mph in many areas as the storm pushed along the east coast on February 9-10, 2013. According to the Weather Channel, at least 15 people died due to various activities such as shoveling snow, carbon monoxide poisoning, and from fallen trees. Nemo was one of the bigger snowstorms to affect the United States since a series of strong storms affected the United States in Winter of 2010-2011.