After 800 years of dormancy, Fagradalsfjall volcano on Iceland’s Reykjanes peninsula began a magnificent eruption on March 19. See video and images.

Bjorn Steinbekk managed to capture stunning footage of the volcano with his drone.

Mount Fagradalsfjall – a volcano on Iceland’s Reykjanes peninsula – began to erupt on the evening of March 19, 2021, the Icelandic Meteorological Office reported. The eruption produced a river of lava that could be seen from the capital city of Reykjavik, 20 miles (30 km) away. While small in comparison to other recent eruptions in Iceland, the event was bright and large enough to be seen by satellites orbiting hundreds of kilometers above the planet.

This is the first eruption in the Reykjanes peninsula in nearly 800 years, the Associated Press reported. Thousands of small earthquakes in February and earlier this month on the Reykjanes peninsula had experts warning that magma was moving beneath the ground and could soon erupt. Late last Friday (March 19), an eruption officially began, as lava broke through the surface near Fagradalsfjall, one of several shield volcanoes on the peninsula.

Iceland is among the most volcanically active places in the world, with roughly one eruption every five years, not including submarine eruptions. Iceland borders the Arctic Circle where it straddles the Mid-Atlantic Ridge, a crack on the ocean floor separating the Eurasian and North American tectonic plates. The shifting of these plates is in part responsible for Iceland’s intense volcanic activity.

The Icelandic Met Office notes that dangers from this eruption are currently limited to the vicinity of the eruption site and nearby valleys. Unhealthy air from the volcanic gases isn’t significantly affecting people living elsewhere on the Reykjanes peninsula or in the capital area. Updates here.

Gudmann & Gyda said: “We were ready to go photographing when the Geldingadalsgos volcanic eruption started. In this video we hike to Geldingadalur walley on the first day of the eruption. This was a unforgettable adventure. It is unreal to stand close to a volcano.”

Bjorn Steinbekk said: “I wanted to share some of my more simple captures of the volcano, and as a big admire of Icelandic music, I was allowed to use this song by the talented Frikki Dór.”

Bjorn Steinbekk did some ‘crater surfing’ with his drone. 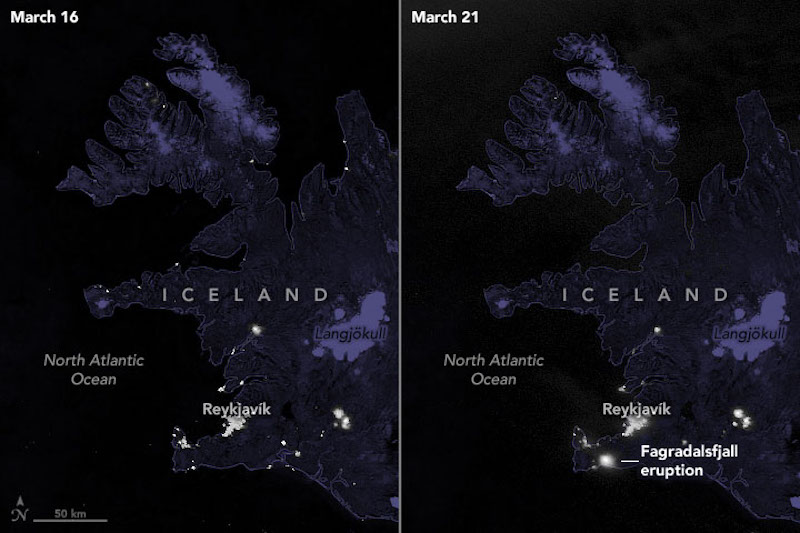 On March 21, 2021, NASA’s Suomi NPP satellite acquired a nighttime view of western Iceland through a thin layer of clouds. Reykjavik, Reykjanesbær, and other cities appear as bright spots in the image. The eruption appears as a new patch of light on the southwestern part of the island. For comparison, the image on the left shows the same area a few days before the eruption. Image via NASA Earth Observatory. 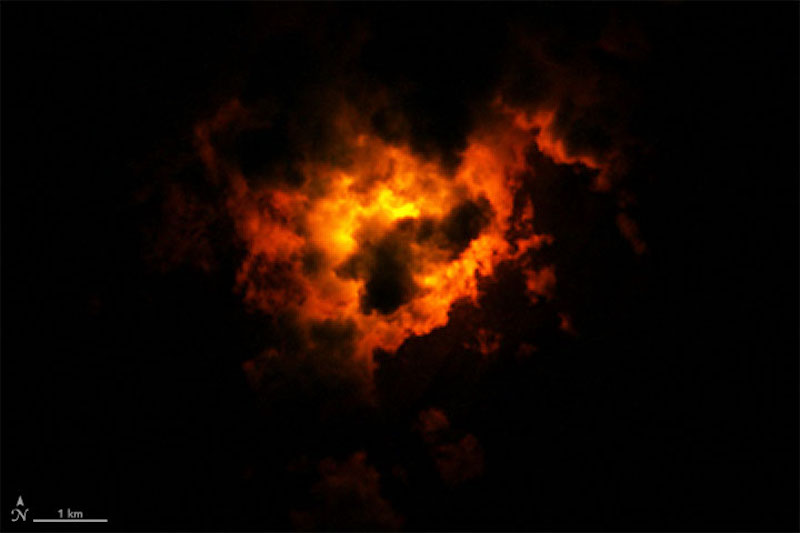 Lava from the volcanic eruption on Iceland’s Reykjanes peninsula lights up clouds from below. NASA’s Landsat 8 satellite acquired this image at 10:25 p.m. local time on March 22, 2021, 3 days after the start of the eruption. The image was made from a combination of shortwave and near-infrared data (bands 7, 6, 5) to reveal how the lava lit up the clouds from below. Extremely hot features, such as lava, can “glow” in the shortwave-infrared part of the spectrum. Image via NASA. 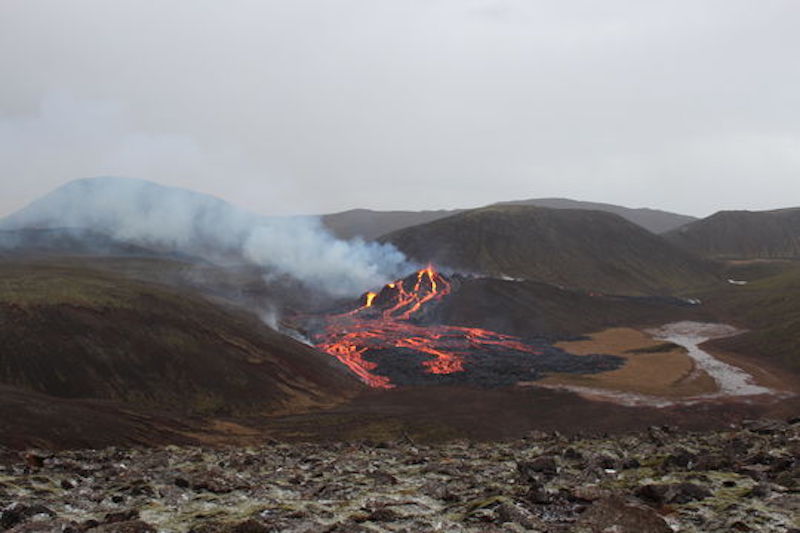