Extreme weather likely for U.S. for end of June

Record breaking heat is possible across the U.S. Southwest as temperatures warm well into the 100s. Could we hit the hottest temperature ever recorded on Earth? 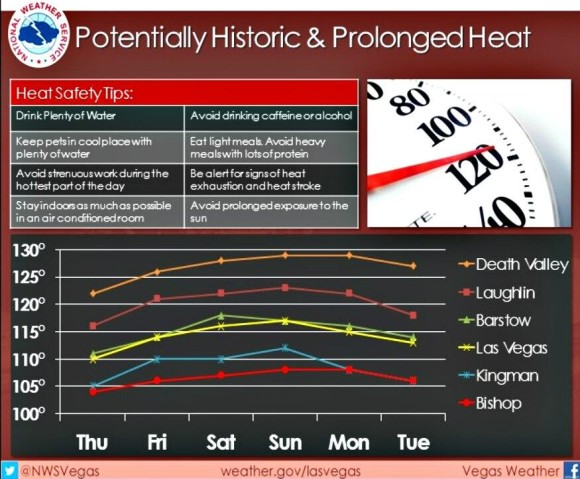 This weekend and the beginning of July could bring record breaking heat for parts of the western U.S. Image Credit: NOAA

Extreme weather will be the main story for the United States between now and the start of July. A highly-amplified weather pattern is occurring that will bring extreme weather across the country. In the western U.S., a large ridge of high pressure will develop and provide extremely hot and perhaps record breaking temperatures. In fact, there is a slim chance that we could tie or break the all-time hottest temperature ever recorded on Earth of 134 degrees Fahrenheit!

On the East Coast, a large trough will take place that will produce plenty of rain across the eastern United States. Some areas could see four to five inches of rain within the next five to seven days. 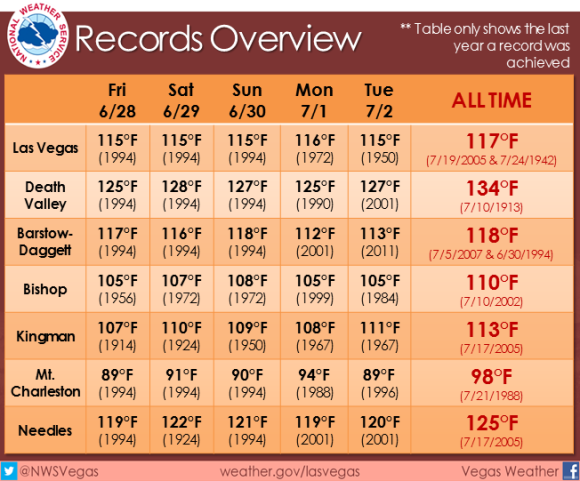 Here is a list of temperatures that the NWS is forecasting select cities in the Southwestern U.S. Image Credit: NWS Las Vegas

An excessive heat warning has been issued for parts of Southeast California, Southern Nevada, and Northwest Arizona for extremely hot temperatures that could warm near 130°F and morning lows could stay in the 90s. Here is a list of possible temperature ranges expected in the Southwest by the National Weather Service:

Could Death Valley tie or break their all time record high of 134°F set back on July 10, 1913? Not only was this the all time record high ever recorded in Death Valley, but it was recognized as the all time hottest temperature ever recorded on Earth since record keeping began. Although temperatures will likely flirt near 130°F, it does not appear likely. However, you never know!

Across the Eastern United States, rainfall totals could be quite impressive with many spots seeing over two to three inches. Areas likely to see decent amounts of rainfall include the Gulf coast, the entire eastern U.S. coast, and into New England and the Northeast United States. Flooding could be an issue in a few spots, especially for those who have seen so much rainfall over the past several weeks. There are a few concerns for minor flooding across the Northeast U.S. for the next couple of days.

Bottom line: While the U.S. West Coast remains hot and dry, the U.S. East Coast remains wet and unsettled. The drought continues with record-breaking heat likely across parts of the western United States. Meanwhile, unsettled weather will continue across the East coast as showers and thunderstorms continue to develop and push into areas that are already saturated. With a highly amplified weather pattern, it is not unusual to see so many extremes occur at once across the country.