Extreme weather in North America likely, thanks to Typhoon Nuri

Typhoon Nuri in the Western Pacific will likely cause extreme weather for the Northern Pacific and parts of North America in the next 5-10 days.

According to scientists, October’s Super Typhoon Vongfong was the planet’s strongest storm for 2014.

Nearly a year ago (November 7, 2013), Super Typhoon Haiyan formed and devastated parts of the Philippines with sustained winds of 190 miles per hour, making it the strongest land-falling tropical cyclone ever recorded. It is still considered one of the strongest storms in the past thirty years.

Unfortunately, another super typhoon formed in the Western Pacific this past weekend that has tied with Super Typhoon Vongfong as the strongest storm of 2014. Super Typhoon Nuri peaked on Sunday (November 2, 2014) with sustained winds near 180 miles per hour (mph) or 290 kilometers per hour (kmh). Nuri has weakened since the weekend, and it is expected to stay east of Japan as it pushes off to the northeast into the northern Pacific Ocean. A trough will pick up Nuri, and the models are expecting the storm to bomb out near the Bering Strait. The storm has the potential to become the strongest storm in that region in recorded history. Nuri’s size and magnitude will likely influence the jet stream’s orientation over the Northern Hemisphere, thus resulting in an extreme weather pattern across North America.

Yes, weather in the Western Pacific can indirectly affect the overall weather pattern across the Northern Hemisphere. 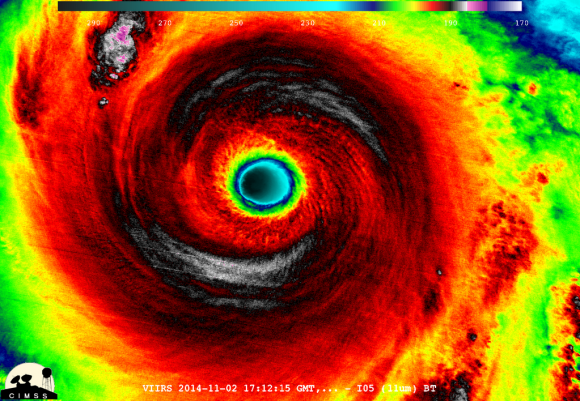 Suomi NPP VIIRS Infrared image of the eye of Super Typhoon Nuri in the West Pacific Ocean on November 2, 2014.

On November 2, forecasters thought Super Typhoon Nuri might strengthen further into a 195 mph storm with gusts near 235 mph. Fortunately, it peaked at 180 and started to gradually weaken on Monday. Nuri becomes the sixth Super Typhoon of the Western Pacific season, largely due to the unusually warm waters and favorable atmospheric conditions across the Western Pacific basin.

The storm will gradually weaken over the next couple of days into a tropical storm. It will stay east of Japan and move out into the Northern Pacific Ocean. 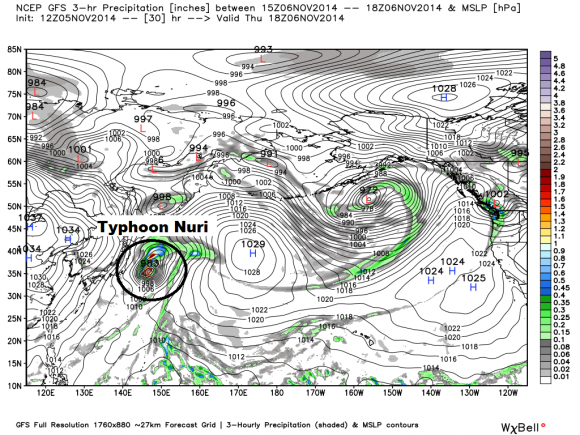 As it gains latitude, the storm will transition from a warm-core low to a cold-core low, also known as an extratropical cyclone.The Northern Pacific jet stream will enhance the storm’s intensity. It will begin to “bomb out”, meaning the barometric pressure will drop drastically. Bombogenesis is a meteorological term used to define mid-latitude cyclones that drops at least 24 millibars within 24 hours. 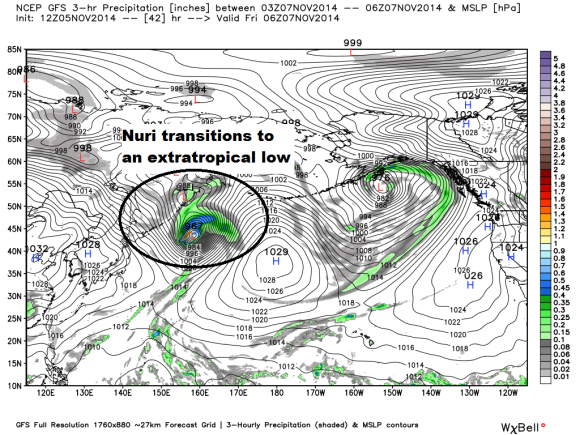 It’ll become a super strong storm with a pressure around 915 to 922 millibars. Imagine a “Superstorm Sandy” over the North Pacific instead of the east coast of the United States. The storm will affect the Bering Strait, and extreme winds and surf is expected. 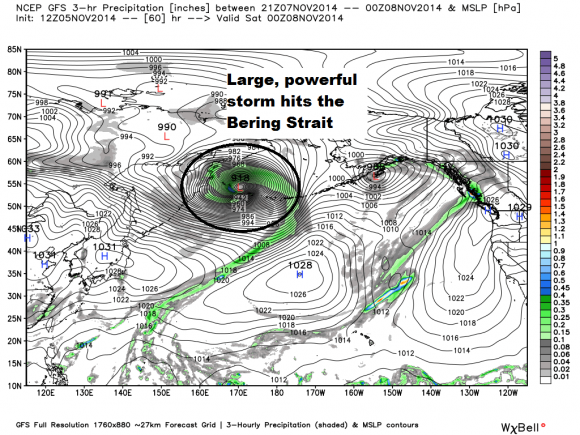 According to Andrew Freedman of Mashable,

To put that into perspective, consider if the storm’s minimum central pressure bottoms out below 925 millibars — as is currently forecast by most computer models — it would set a record for the lowest pressure recorded in the Bering Sea. The current record holder is 925 millibars, set in October 1977 in Dutch Harbor, Alaska

The storm will affect parts of the Alaska coast by Friday into Saturday. Some areas will likely experience hurricane force winds, high seas of 30 feet or greater, and minor coastal flooding/erosion in parts of southwest Alaska coastal areas. Some of our weather models are even projecting waves as high as 50 feet!

The storm will influence the jet stream and atmospheric patterns across the Northern Hemisphere. It will likely trigger a ridge of high pressure across the Eastern Pacific and into Western North America. Meanwhile, it’ll likely contribute to a large trough that will dig down into parts of Central/Eastern Canada and the United States. As the jet stream digs south, it will likely bring the year’s first round of arctic air into the regions. Some of the weather models are indicating the potential for single digits in the Northern Plains by late next week (November 13-15). It is still uncertain if it will produce a big storm for the eastern United States. However, both the GFS and ECMWF models indicate a significant surge of cold air into the area. 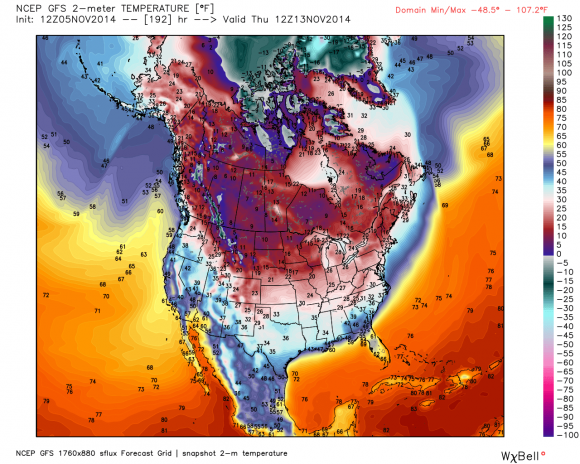 Big surge of cold air will hit Canada and the Central/Eastern U.S. by November 13-15, 2014. Image Credit: GFS via Weatherbell

The Climate Prediction Center is in agreement with a significantly colder weather pattern setting up for next week. They are forecasting temperatures well below average for Central and Eastern United States with above average temperatures likely along the west coast of Canada and the United States.

Temperatures will likely be well below average for the central and eastern parts of the United States by next week. Image Credit: Climate Prediction Center

Bottom line: Next time someone asks you how weather in the Western Pacific can affect the weather patterns across North America, you might direct them to this article. Nuri will likely cause hurricane-like conditions along the Bering Strait as it becomes extratropical (no longer a tropical cyclone). It will help amplify the jet stream and likely produce a surge of very cold air that will reach parts of central/eastern Canada and the United States by November 12-15, 2014. There remains uncertainty regarding how cold the pattern will be, but as soon as our models get within three to five days of the forecast, we will truly get a better idea of the overall setup and if a storm will develop.