Extinctions without a fossil trace?

Many species now going extinct might vanish without a fossil trace, suggests a new study. 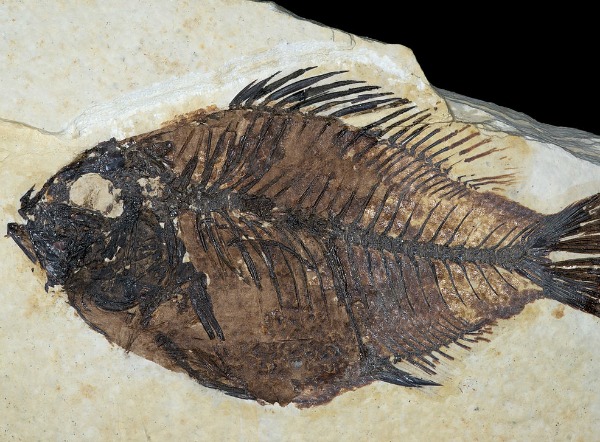 Many species now perishing in Earth’s ongoing sixth mass extinction might vanish without leaving a fossil trace – and earlier extinctions may be underestimated as well, according to a study by three paleontologists published March 2, 2016 in Ecology Letters. 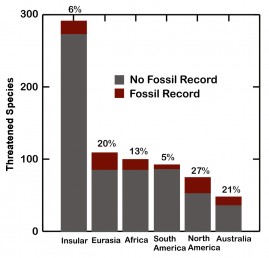 Number of threatened species and their representation in the fossil record by continent and ‘insular’ (islands). Image credit: University of Illinois, Chicago.

The researchers compared the “Red List” of endangered species – the world’s most comprehensive list of species at risk of extinction – with several ecological databases of living species and three paleontological databases of catalogued fossils. They ran a statistical analysis to indicate which threatened species were most likely to disappear with no mark of their existence.

The researchers were shocked to find that more than 85 percent of the mammal species at high risk of extinction lack a fossil record. Those at highest risk have about half the probability of being incorporated into the fossil record compared to those at lower risk.

Which animals are least likely to be found as fossils? According to study author Roy Plotnick, professor of earth and environmental sciences at the University of Illinois at Chicago:

… the small, cute and fuzzy ones, like rodents and bats. Body size is an obvious factor — bigger things tend to leave a fossil record, as do things with larger geographical ranges.

Viewed from the perspective of the fossil record alone, the magnitude of the current mammal die-off thus appears markedly reduced. The picture may be even more distorted for other land-dwelling vertebrates: only 3 percent of today’s threatened bird species and 1.6 percent of threatened reptile species have a known fossil record.

Comparing the scale of the current extinction episode, which is based primarily on terrestrial vertebrates, to earlier extinctions that are mostly calculated from the fossil record of hard-shelled marine invertebrates, is particularly problematic, Plotnick said, although ancient extinctions may also be underestimated by contemporary paleontologists.

Nevertheless, fossils will provide the only reliable record of life on Earth for posterity. Plotnick said:

All such species would thus be unknown in the far future, he said, if the written historical record is lost — as it might well be. The fossil record, Plotnick points out, is much more durable than any human record. He said:

As humanity has evolved, our methods of recording information have become ever more ephemeral. Clay tablets last longer than books. And who today can read an 8-inch floppy? If we put everything on electronic media, will those records exist in a million years? The fossils will.

Bottom line: A study published March 2, 2016 in Ecology Letters suggests that any species now perishing in Earth’s ongoing sixth mass extinction might vanish without leaving a fossil trace – and earlier extinctions may be underestimated as well.

Read more from the University of Illinois at Chicago