Large plumes of ash were released during an eruption at Alaska’s Pavlof Volcano in early June 2014. The volcano remains on an orange alert level.

The eruption at Mount Pavlof in Alaska has now subsided after several days of heightened activity in early June that sent fountains of lava and towering plumes of ash into the air. The volcano is currently under an orange alert level because officials do not know if or when the eruption will resume.

Mount Pavlof is a 8,262-foot (2,518-meter) tall volcano that is located along the Aleutian Arc off the western coast of Alaska. It is one of Alaska’s most active volcanoes, and it has erupted about 30 times since 1901. The last time the volcano erupted was June 26, 2013. 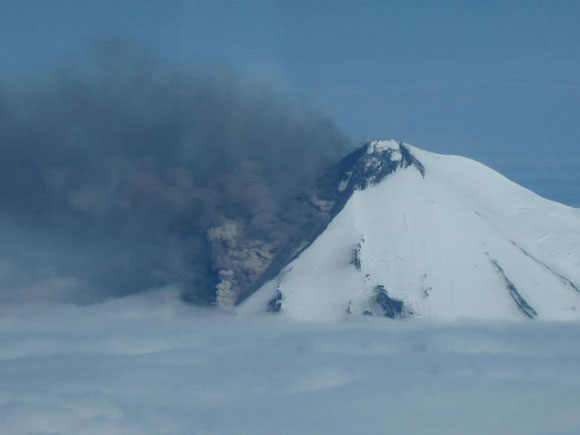 Photograph of the eruption at Mt. Pavlof on May 31, 2014. Image Credit: Paul Horn, Alaska Fish and Game.

The most recent eruption at Pavlof began on the evening of May 30, 2014, and the level of volcanic activity escalated gradually over the next several days. During June 2–4, fountains of lava and large plumes of ash and steam were detected over the volcano. At times, ash plumes up to 30,000 feet (9,144 meters) in height were observed. Officials issued a red/warning on Monday, June 2 to protect aircraft from the thick ash, which can damage engines. The red/warning was reduced to an orange/watch on Tuesday, June 3 as the eruptive activity subsided. Lower levels of eruptive activity continued throughout the week. On the morning of June 6, officials at the Alaska Volcano Observatory noted that the level of activity at Mount Pavlof had declined substantially.

The volcano is located in a remote region in Alaska, and no injuries have been reported. Lahars (mudflows) were detected along the north flank of the volcano and some flooding in that area is likely, officials say. Heavy ash fallout in nearby communities is, however, not expected to occur, according to the latest update from the Alaska Volcano Observatory on June 6, 2014. 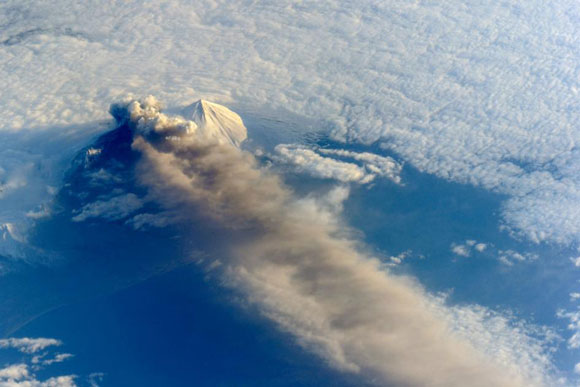 Eruption a Mt. Pavlof taken on May 18, 2013 from the International Space Station. Image Credit: NASA.

The alert status continues to be at the orange/watch level because officials do not know if or when significant eruptive activity will resume.

Bottom line: The eruption at Mount Pavlof in Alaska has now subsided after several days of heightened activity in early June 2014. The volcano is currently under an orange alert level because officials do not know if or when the eruption will resume.

What causes volcanos to produce lightning?