Mount Sinabung on the Indonesian island of Sumatra erupted violently on February 19, 2018. See video of the dramatic first moments of the eruption.

The #Sinabung eruption with ash plume & hot pyroclastic flows seen on the @vulkanologi_mbg webcam today. The volcano went from calm to very much the opposite in an instant. The hazard zone is in place for this reason. You won't outrun these. pic.twitter.com/KiZwKIC7wq

On February 19, 2018, Mount Sinabung volcano, on the Indonesian island of Sumatra, erupted violently, spewing ash at least 16,000 to 23,000 feet (5 to 7 km) into the air. The stratovolcano has been sporadically active since 2010, following four centuries of quiet.

According to a report from the Associated Press, the lava dome obliterated a chunk of the peak as it erupted. Plumes of hot gas and ash flowed down the volcano’s summit and spread out in an area about 3 miles (5 km) in diameter. Ash falls were recorded as far away as the town of Lhokseumawe, some 160 miles (260 km) to the north. 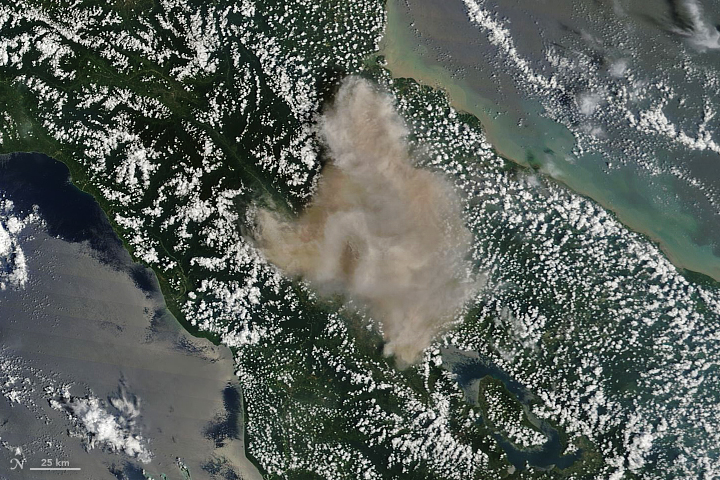 At 11:10 a.m. local time on February 19, 2018, NASA’s Terra satellite captured this natural-color image of the eruption, just a few hours after it began. Image via NASA.

Villages were coated in ash, and airline pilots were given the highest alert for the region. Government officials handed out face masks to the citizens of the island and advised them to stay indoors due to the potentially dangerous air quality. Volcanologist and Rocky Planet blogger Erik Klemetti said:

Breathing volcanic ash is a significant health hazard – the ash is really small shards of glass, so it can abrade your lungs and form a “cement.” 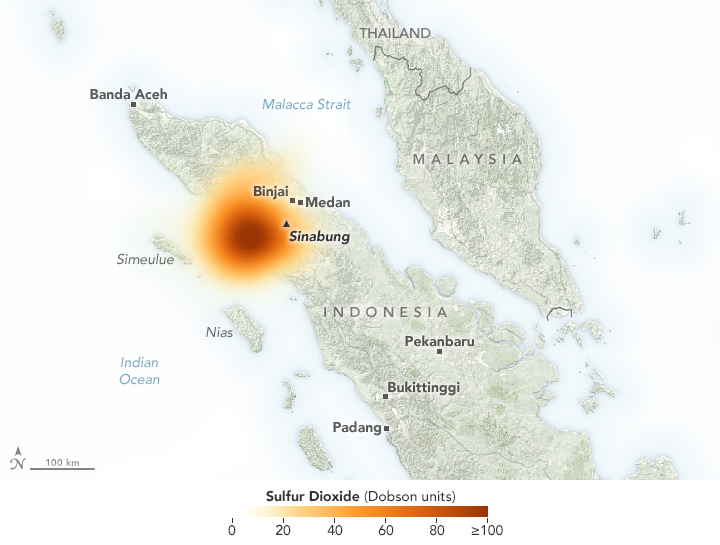 This map shows concentrations of SO2 as detected at 1:20 p.m. local time on February 19 by the Ozone Mapper Profiler Suite (OMPS) on the Suomi-NPP satellite. Maximum gas concentrations reached 140 Dobson units. Image via NASA.

The volcanic plume also contained sulfur dioxide (SO2), which can irritate the human nose and throat when breathed in. The gas reacts with water vapor in the atmosphere to produce acid rain, and it also can react with other gases to form aerosol particles that cause haze and, in extreme events, climate cooling.