The National Weather Service used the word “biblical” to describe ongoing flooding in Colorado. Many are evacuating as water levels rise.

A combination of a slow-moving, upper-level low and rich moisture from the south formed a setup that is likely going to be a once-a-century flood event in parts of north/central Colorado. Many areas have experienced rainfall amounts that they would typically see in one year, in only a couple of days. The warnings issued by the National Weather Service (NWS) in the Denver/Boulder Colorado area have warned of epic, even “biblical” proportions. Interstate 25, which goes through Colorado Springs, Denver and Boulder is closed in both directions in some places due to water over the highway (look here for a list of closed roads as of Friday at 11:45 a.m. MDT). Many homes are flooded, and at least three people have died this week in this unusual and rare weather event. Rain is still in the forecast for today (September 13, 2013), but fortunately, it is expected to taper off and push to the east by Saturday. Meanwhile, evacuations are ongoing in parts of Colorado. 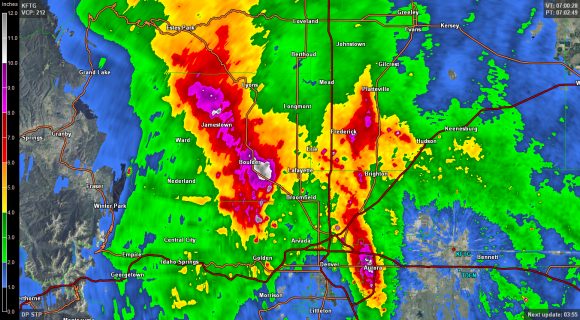 Rainfall totals over the past three days in Colorado.

With heavy rains falling, evacuations took place throughout the day on September 12, and into the overnight hours of the September 13. USAToday is reporting that the Colorado National Guard is busy today evacuating 2,000 residents of Lyons, Colorado and another 500 in south Boulder County today. People are having to leave their homes in the dark, by foot, and find shelter.

For north/central Colorado, the rainfall amounts are hard to comprehend. In just three days this week, rainfall amounts have added up to 6 to 12 inches of rain. Fort Carson, Colorado received 8.2″ of rain in less than three hours from 5:55pm to 8:30pm MT yesterday evening. According to the National Weather Service, Boulder has recorded 12.30 inches of rain which has smashed the old record of 5.50 inches in an entire month. That record goes back to 1897. These are rainfall totals typically seen from a tropical cyclone by the coast, but this is a different monster that is far inland in a mountainous region. 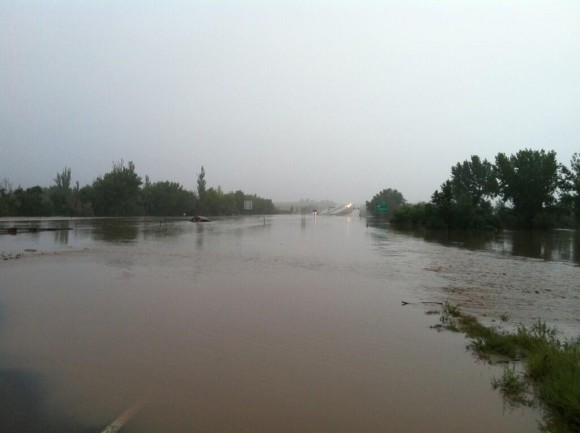 Big Thompson River is now flowing across I-25 shutting it down in both directions. Image Credit: @mikeseidel via Twitter

Meteorological setup of the extreme flooding in Colorado.

What is causing the Colorado floods?

The system responsible for the heavy and persistent rain across Colorado is thanks to an upper-level low to their west. The upper-level low was trapped and could not move out of the region thanks to an area of high pressure to the north. Meanwhile, a stream of moisture was continuously building across the region from the south. With the help of orographic lift of the nearby mountains, moisture continued to train over the same areas. 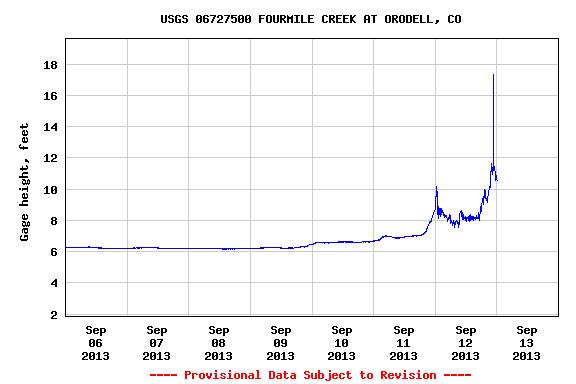 Problems resulting from the Colorado floods>

Numerous roads, businesses, and schools have closed. Many houses had water leaking inside, causing damage. Flood waters lifted cars and caused damage to roads, houses, and brought down trees. According to the NWS, the river stage on the North Fork of the Big Thompson River yesterday evening was at 10.55 feet – more than the Big Thompson Flood of 1976 at 9.3 feet.

The NWS out of Denver/Boulder, Colorado used strong language in their weather discussion about the extreme flooding situation across their area.

MAJOR FLOODING/FLASH FLOODING EVENT UNDERWAY AT THIS TIME WITH BIBLICAL RAINFALL AMOUNTS REPORTED IN MANY AREAS IN/NEAR THE FOOTHILLS.

Here are several images and video of the massive flooding in and around Colorado:

Here is video via Facebook from 9News showing a road being washed out on US 36 near Lyons, Colorado. 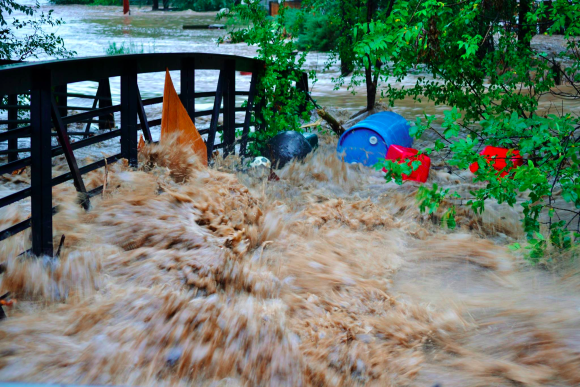 Flooding has destroyed roads near St Vrain Creek, up the road from Lyons Colorado. 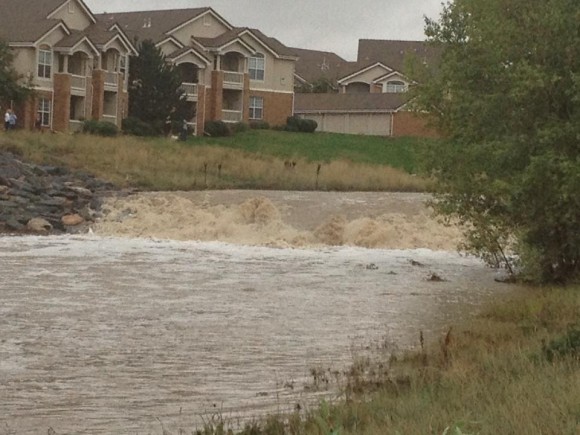 Raw footage from the front lines as a cameraman follows along with the Fire Department responing to some of the Extreme Flooding from the Big Thompson Canyon this evening between Loveland and Estes Park, Colorado. Video by Storm Chasing Video.

Bottom line: An extreme record breaking flood event has immobilized parts of north/central Colorado as rainfall totals of 6 to 12 (more in isolated spots) inches inundated the area. Some cities and communities were trapped as water levels continued to rise. Flood waters have carried vehicles, dirt, and other debris, reminiscent of the March 2011 tsunami in Japan, causing significant damage across the region. As of today (September 13, 2013), at least three people have died, and that total could rise. The area remains under a Flash Flood watch for the possibility of more showers later this evening. Prayers go out to everyone affected by this rare flooding event. Here is hoping they can dry out soon.