Report on CFC-11 – an illegal chemical responsible for ozone-depletion in Earth’s atmosphere – now apparently on an upswing again. Meanwhile, new direct evidence the ban on CFCs is working and the ozone hole is recovering.

Timelapse photograph of a NOAA weather balloon, drifting over the South Pole. The balloon was carrying instruments to measure atmospheric ozone. Image via NOAA.

Trichlorofluoromethane – also called freon-11 or CFC-11 – was once widely used as a refrigerant, among other things, until it became known as an ozone-depleting chemical. In fact, it’s the second-most-abundant ozone-depleting chemical known. CFC stands for chlorofluorocarbon, and, as a group, these human-made chemicals are charged with, for example, the infamous hole in Earth’s ozone layer that forms over Antarctica each year. The Montreal Protocol, finalized in 1987, is the international treaty designed to protect Earth’s ozone layer. It called for the phase-out of substances like CFC-11, whose production was slated to end entirely by 2010. But a new analysis of long-term atmospheric measurements by NOAA scientists shows emissions of CFC-11 are rising again. NOAA said the increase is:

… most likely from new, unreported production from an unidentified source in East Asia.

The study reporting on the rise in CFC-11 was published May 16, 2018, in the peer-reviewed journal Nature. NOAA scientist Stephen Montzka, the study’s lead author, said:

We’re raising a flag to the global community to say, “This is what’s going on, and it is taking us away from timely recovery of the ozone layer.” Further work is needed to figure out exactly why emissions of CFC-11 are increasing, and if something can be done about it soon. 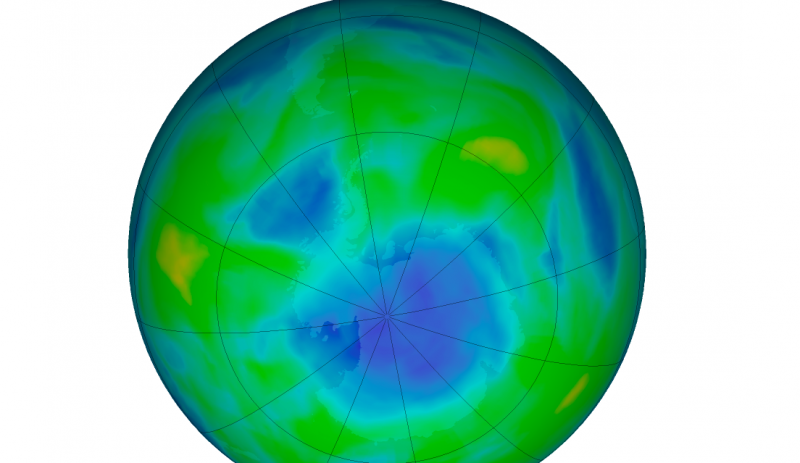 May 15, 2018, false-color view of total amount of ozone over Antarctica and the South Pole. The purple and blue colors are where there is the least ozone, and the yellows and reds are where there is more ozone. The ozone hole opens up in the Antarctic summertime and tends to be at its peak each year in September. View the latest status of the ozone layer at NASA Ozone Watch.

Chlorofluorocarbons, or CFCs, were once considered a triumph of modern chemistry. These chemicals were stable and versatile and were used in hundreds of products, from military systems to cans of hairspray.

That was until scientists around the world began to realize that this family of “wonder chemicals” was damaging Earth’s protective ozone layer. There was disagreement and disbelief by some, of course, at first. But then British Antarctic Survey scientists reported an Antarctic ozone hole – the first one ever recognized – in a paper in Nature in May 1985. It came as a shock to the scientific community and the world. The Montreal Protocol was the result, and world leaders hailed it – and continue to hail it – as an example of effective global cooperation.

Is the ozone hole recovering? It’s important to remember that we’re talking about Earth processes here (as well as human processes), and Earth tends to move slowly in contrast to our human timescale. NASA just said in January 2018 that it had the first direct proof of ozone hole recovery due to the chemicals ban. That is, scientists for the first time showed – through direct satellite observations of the ozone hole – that levels of ozone-destroying chlorine are declining, resulting in less ozone depletion. The video below talks about that:

Montzka and his team of researchers from the the Cooperative Institute for Research In Environmental Sciences (CIRES), plus scientists from the U.K. and the Netherlands, are working to monitor ozone in Earth’s atmosphere. They said this is the first time that emissions of one of the three most abundant, long-lived CFCs have increased for a sustained period since production controls took effect in the late 1980s.

As we said above, chlorofluorocarbons are a very stable class of chemicals, and CFC-11 – in particular – has a long life in Earth’s atmosphere. That’s part of the reason it’s the second-most abundant ozone-depleting chemical in the atmosphere. Another part of the reason is that there are continuing emissions of CFC-11 from foam building insulation and appliances manufactured before the mid-1990s. A smaller amount of CFC-11 also exists today in older refrigerators and freezers.

Thanks to the Montreal Protocol, CFC-11 concentrations have declined by 15 percent from peak levels measured in 1993, these scientists said.

But – though concentrations of CFC-11 in the atmosphere are still declining – they’re declining more slowly than they would if there were no new sources, Montzka said.

The results from the new analysis of NOAA atmospheric measurements explain why. From 2014 to 2016, emissions of CFC-11 must have increased by 25 percent above the average measured from 2002 to 2012.

Scientists had been predicting that by the mid- to late century, the abundance of ozone-depleting gases would fall to levels last seen before the Antarctic ozone hole began to appear in the early 1980s.

Montzka said the new analysis can’t definitively explain why emissions of CFC-11 are increasing, but in the paper, the team discusses potential reasons why. Montzka said:

In the end, we concluded that it’s most likely that someone may be producing the CFC-11 that’s escaping to the atmosphere. We don’t know why they might be doing that and if it is being made for some specific purpose, or inadvertently as a side product of some other chemical process.

If the source of these new emissions can be identified and controlled soon, the damage to the ozone layer should be minor, Montzka said. If not remedied soon, however, substantial delays in ozone layer recovery could be expected.

By the way, according to NASA, the 2017 ozone hole – which peaked, as they typically do, in September – was the smallest observed since 1988. That’s not necessarily because the Montreal Protocol is working (although it doubtless is working, albeit over a long timescale). Instead, it’s a result of the fact that Earth’s atmosphere is extremely complex, with many variables working together to create the big picture.

So it wasn’t the ban on CFCs, NASA said, that led to 2017’s small ozone hole. Instead, it was unusual warmth in the stratosphere that caused the smaller hole last year (and in 2016). After all, you might ask yourself … why did the ozone hole open over Antarctica in the first place, and not somewhere else? It’s because Antarctica is the coldest place on Earth, and the air above it is also very cold. Ozone depletion works best in very cold air. The record global warmth in recent years means a warmer stratosphere over Antarctica, with one result apparently being smaller ozone holes in 2017 and 2016.

Ozone depletion occurs in cold temperatures. That’s why the ozone hole reaches its annual maximum in September or October, at the end of Southern Hemisphere winter each year. And it’s why 2016 and 2017 – both record warm years – had smaller-than-usual ozone holes. Image via NASA/NASA Ozone Watch/Katy Mersmann.

Bottom line: Scientists engaged in monitoring ozone-depleting chemicals in Earth’s atmosphere have found that CFC-11 appears to be on the rise, despite an international ban on its production that went into effect in 2010.

Source: An unexpected and persistent increase in global emissions of ozone-depleting CFC-11