Think about your morning coffee. When you stir it, the liquid spins. Imagine that happening on an oceanic scale, and you’ve got an ocean gyre.

Think about your morning coffee. When you stir it, the liquid spins. Imagine that happening on an oceanic scale, and you’ve got an ocean gyre.

EarthSky spoke to Emanuele Di Lorenzo, a gyre expert at Georgia Institute of Technology. He said an ocean gyre is a huge, rotating mass of seawater. He said:

The reason that we use the word “gyres,” as opposed to simply using the word “currents,” is that these water masses rotate on the scales of the entire oceanic basin.

There are gyres in every major ocean on Earth – the Atlantic, Pacific, and Indian Oceans, Di Lorenzo said. The North Pacific gyre, for example, extends all the way from Japan to the United States, and back again.

Adapted from DataStreme Ocean and used with permission of the American Meteorological Society.

We asked what forces create this vast rotating gyre. Di Lorenzo said there’s really no simple explanation of why we have these oceanic gyres. But, he said, there are three factors that are known to work together. The first is the rotation of our Earth. Earth spins, and the oceans, being liquid, move also, but at a slightly different rate. Then there’s the sun, which heats Earth’s atmosphere and helps to create surface winds. These winds, through friction, move seawater on a massive scale.

The third factor contributing to the creating of gyres in Earth’s oceans is dry land. Earth’s continents give shape to the water in the ocean basins and affect their movement. Dr. Di Lorenzo explained why gyres are so important to study, especially right now. Di Lorenzo said:

The gyres carry around the heat that comes from the sun. That’s very important in terms of understanding the role of ocean in climate, especially nowadays when we talk about climate change. The movement of heat in the ocean is very important in that context. 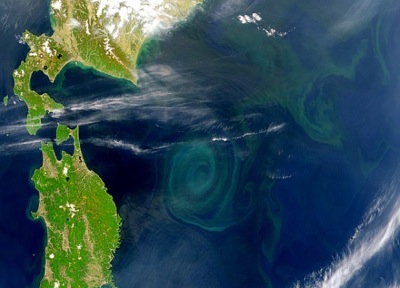 Dr. Di Lorenzo added that our trash – plastic, especially, because it doesn’t break down much in water – is being carried by gyres from shores all across the world to the middle of the ocean. It’s collecting in garbage patches in the center of gyres in both the Atlantic and the Pacific, and these patches – which are more like a soup – span thousands of kilometers.

Di Lorenzo said there are more than five major ocean gyres on Earth, and a number of minor ones. The Atlantic and the Pacific Ocean have four gyres each. Depending what hemisphere gyres are in, ocean gyres can rotate in either a clockwise or counter-clockwise direction. The movement is not all perfect circles, though. It can be irregular and oval. He described the vastness of their scope.

Dr. Di Lorenzo studies the North Pacific gyre to find out how gyres change over time, and how nutrients get circulated throughout the Pacific.

If you think of the human body, you have the bloodstream that carries all the nutrients through the body. You can think that the ocean gyres carry around nutrients that are vital for the survival of ocean living systems, things like fish, coral, and a variety of ocean ecosystems.

The gyres also transport the sun’s heat, and can affect weather and climate events. Gyres are part of what’s known as the ocean’s circulation system, or the “ocean conveyor.” Di Lorenzo explained that, even as ocean gyres can influence climate, they can be influenced by climate. He said that the gyre he studies in the North Pacific is influenced by the well-known climate phenomena El Nino and La Nina. These are special climate patterns characterized by variations in the temperature of the surface of the tropical eastern Pacific Ocean, and air surface pressure in the tropical western Pacific. He said:

This could mean more droughts and/or more storms in North America, he said. But, Di Lorenzo cautioned, this is a complicated topic. The connection between climate change, El Nino, weather, and ocean activity is still being hotly debated by scientists.