Today is World Elephant Day. Here’s a look at how unique brain structures – different from those of any other mammal – are responsible for elephants’ special abilities in learning and memory. 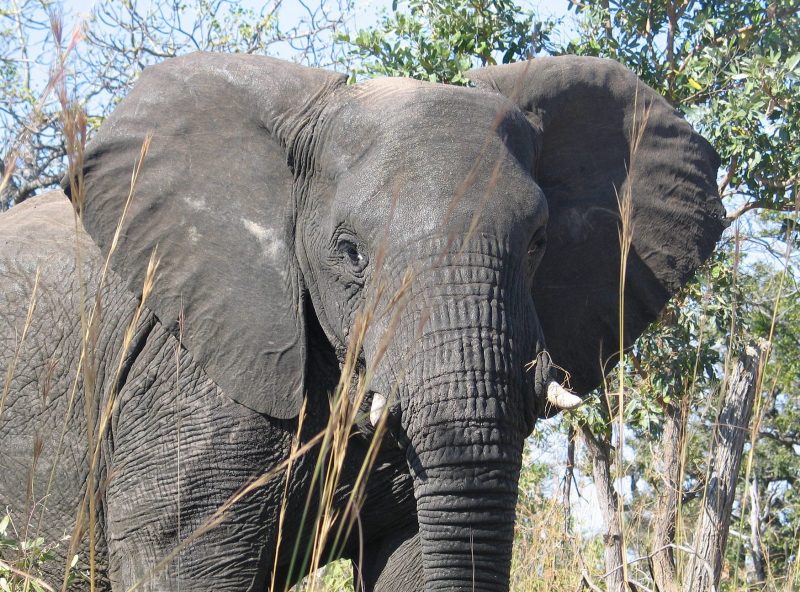 Conservationists have designated August 12 as World Elephant Day to raise awareness about conserving these majestic animals. Elephants have many engaging features, from their incredibly dexterous trunks to their memory abilities and complex social lives.

But there is much less discussion of their brains, even though it stands to reason that such a large animal has a pretty big brain (about 12 pounds). Indeed, until recently very little was actually known about the elephant brain, in part because obtaining well-preserved tissue suitable for microscopic study is extremely difficult.

That door was opened by the pioneering efforts of neurobiologist Paul Manger at the University of the Witwatersrand in South Africa, who obtained permission in 2009 to extract and preserve the brains of three African elephants that were scheduled to be culled as part of a larger population management strategy. We have thus learned more about the elephant brain in the last 10 years than ever before.

The research shared here was conducted at Colorado College in 2009-2011 in cooperation with Paul Manger, Columbia University anthropologist Chet Sherwood and neuroscientist Patrick Hof of the Icahn School of Medicine at Mount Sinai. Our goal was to explore the shapes and size of neurons in the elephant cortex.

My lab group has long been interested in the morphology, or shape, of neurons in the cerebral cortex of mammals. The cortex constitutes the thin, outer layer of neurons (nerve cells) that cover the two cerebral hemispheres. It is closely associated with higher cognitive functions such as coordinated voluntary movement, integration of sensory information, sociocultural learning and the storing of memories that define an individual. 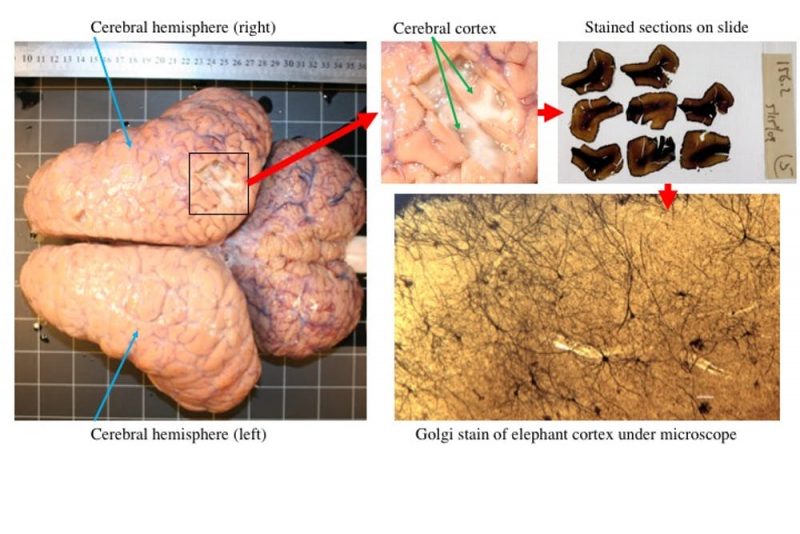 These images illustrate the process of removing a small section of cerebral cortex from the right cerebral hemisphere of the elephant. This tissue is stained and placed on a glass slide so that, under the microscope, one can see individual neurons and trace them in three dimensions. Image via Robert Jacobs.

The arrangement and morphology of neurons in the cortex is relatively uniform across mammals – or so we thought after decades of investigations on human and nonhuman primate brains, and the brains of rodents and cats. As we found when we were able to analyze elephant brains, the morphology of elephant cortical neurons is radically different from anything we had ever observed before.

How neurons are visualized and quantified

The process of exploring neuronal morphology begins with staining brain tissue after it has been fixed (chemically preserved) for a period of time. In our laboratory we use a technique over 125 years old called the Golgi stain, named after Italian biologist and Nobel Laureate Camillo Golgi (1843-1926).

This methodology set the foundation of modern neuroscience. For example, Spanish neuroanatomist and Nobel laureate Santiago Ramon y Cajal (1852-1934) used this technique to provide a road map of what neurons look like and how they are connected with each other.

The Golgi stain impregnates only a small percentage of neurons, allowing individual cells to appear relatively isolated with a clear background. This reveals the dendrites, or branches, that constitute the receptive surface area of these neurons. Just as branches on a tree bring in light for photosynthesis, the dendrites of neurons allow the cell to receive and synthesize incoming information from other cells. The greater the complexity of the dendritic systems, the more information a particular neuron can process.

Once we stain neurons, we can trace them in three dimensions under the microscope, with the help of a computer and specialized software, revealing the complex geometry of neuronal networks. In this study, we traced 75 elephant neurons. Each tracing took one to five hours, depending on the complexity of the cell.

Even after doing this kind of research for years, it remains exciting to look at tissue under the microscope for the first time. Each stain is a walk through a different neural forest. When we examined sections of elephant tissue, it was clear that the basic architecture of the elephant cortex was different from that of any other mammals that have been examined to date – including its closest living relatives, the manatee and the rock hyrax. 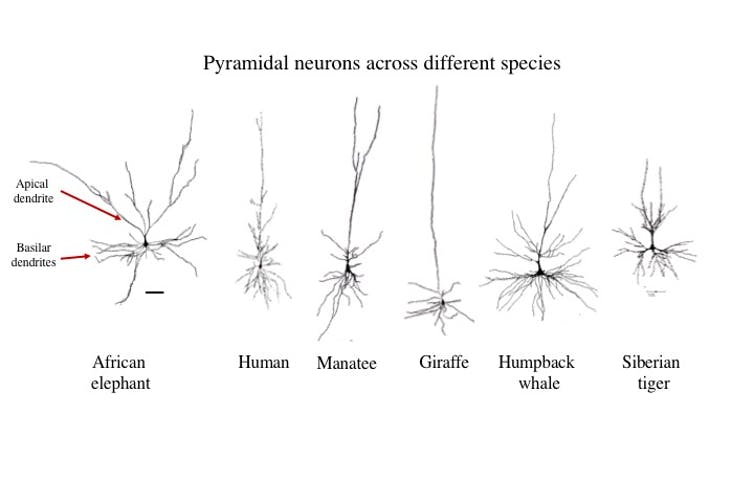 Tracings of the most common neuron (the pyramidal neuron) in the cerebral cortex of several species. Note that the elephant has widely branching apical dendrites, whereas all other species have a more singular, ascending apical dendrite. The scale bar = 100 micrometers (or 0.004 of an inch). Image via Bob Jacobs.

Here are three major differences that we found between cortical neurons in the elephant and those found in other mammals. 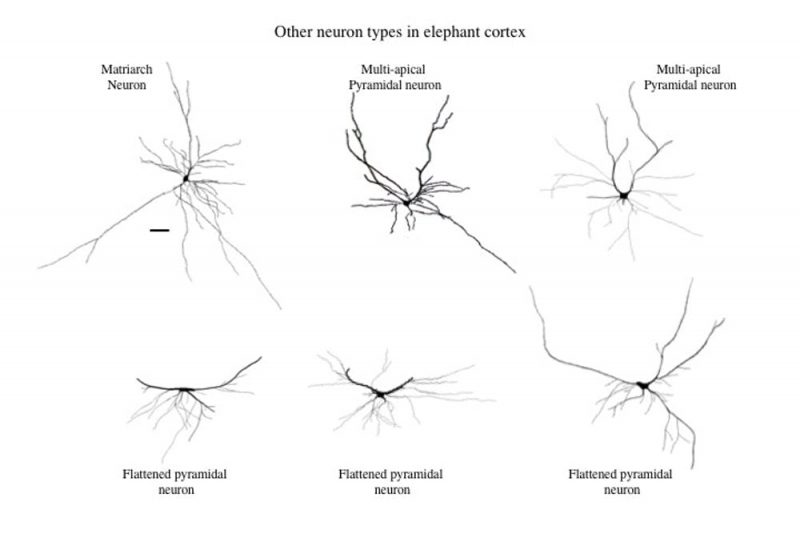 A variety of cortical neurons in the elephant that are seldom if ever observed in the cortex of other mammals. Note that all of them are characterized by dendrites that spread out from the cell body laterally, sometimes over considerable distances. The scale bar = 100 micrometers (or 0.004 of an inch). Image via Bob Jacobs.

Second, the elephant exhibits a much wider variety of cortical neurons than do other species. Some of these, such as the flattened pyramidal neuron, are not found in other mammals. One characteristic of these neurons is that their dendrites extend laterally from the cell body over long distances. In other words, like the apical dendrites of pyramidal cells, these dendrites also extend out like human arms uplifted to the sky.

Taken together, these morphological characteristics suggest that neurons in the elephant cortex may synthesize a wider variety of input than the cortical neurons in other mammals.

In terms of cognition, my colleagues and I believe that the integrative cortical circuitry in the elephant supports the idea that they are essentially contemplative animals. Primate brains, by comparison, seem specialized for rapid decision-making and quick reactions to environmental stimuli.

A tuskless matriarch elephant shows kindness toward young orphan elephants trying to find their way in the Kenyan bush.

Observations of elephants in their natural habitat by researchers such as Dr. Joyce Poole suggest that elephants are indeed thoughtful, curious and ponderous creatures. Their large brains, with such a diverse collection of interconnected, complex neurons, appear to provide the neural foundation of the elephant’s sophisticated cognitive abilities, including social communication, tool construction and use, creative problem-solving, empathy and self-recognition, including theory of mind.

Bottom line: Cells that transmit nerve impulses in the part of elephants’ brains responsible for functions such as learning and memory are structured differently from those of any other mammal.