Electrifying view inside a cyclone from ISS

If you love extreme weather, outer space and photography, you’ll love this image of lightning inside Cyclone Bansi in the Indian Ocean, taken from ISS. 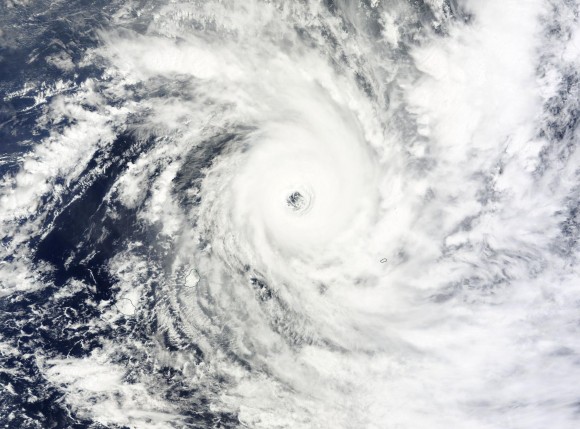 Samantha Cristoforetti, an Italian astronaut aboard the International Space Station (ISS), captured this view of Tropical Cyclone Bansi a couple of days ago (January 15, 2015), as the space station flew above the Indian Ocean. At the time, Bansi was a strong cyclone equivalent to a Category 4 storm with a symmetric eye and defined banding features. Now look below at Cristoforetti’s amazing pictures of this cyclone, via Twitter this weekend. Cristoforetti managed to catch lightning flashing within the eye of the storm. Simply amazing and breathtaking weather photos!

Capturing lightning in itself is a difficult feat. Taking images of the lightning from outer space? How cool is that? 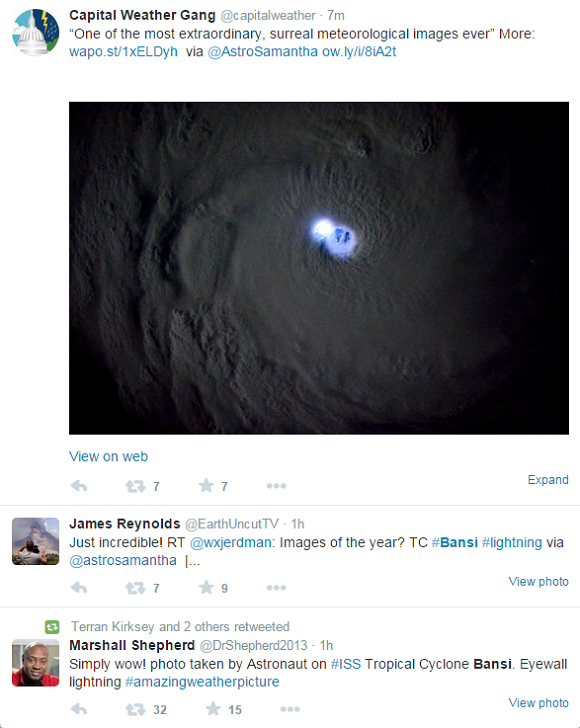 Image via Samantha Cristoforetti aboard ISS (@AstroSamantha on Twitter)

And a look from above into the eye of the cyclone! E uno sguardo dall'alto nell'occhio del ciclone. #Bansi pic.twitter.com/1IKScsJekl

Lightning within an eye of the storm typically indicates a strengthening system. Cyclone Bansi peaked in intensity on January 15, 2015, with winds estimated around 150 miles per hour (240 kph).

Bansi is not a threat to land, and is expected to weaken and dissipate by Monday, January 19.

Bottom line: Samantha Cristoforetti, an Italian astronaut aboard ISS some amazing shots of lightning at the center of Tropical Cyclone Bansi on January 15, 2015. Astronauts on the ISS have the best views of the Earth. Who isn’t jealous?