Last spring, NOAA announced that an El Niño could develop by Fall 2012 and would likely influence the global weather conditions. What’s up with El Niño?

Since last spring, NOAA announced that an El Niño could develop by Fall 2012 and would likely influence the global weather conditions. El Niño, which is defined as warmer sea surface temperatures than average across the equatorial Pacific Ocean, was predicted to develop and remain fairly weak for Fall 2012 (Northern Hemisphere). Of course, this outlook influenced many hurricane forecasters to predict that the hurricane season would be less active and only produce an average amount of storms. Unfortunately, this outlook did not verify because El Niño is having a difficult time developing. Overall, the El Niño- Southern Oscillation (ENSO) neutral conditions continue, meaning we are not seeing a cooling or warming of sea surface temperatures across the equatorial Pacific Ocean. 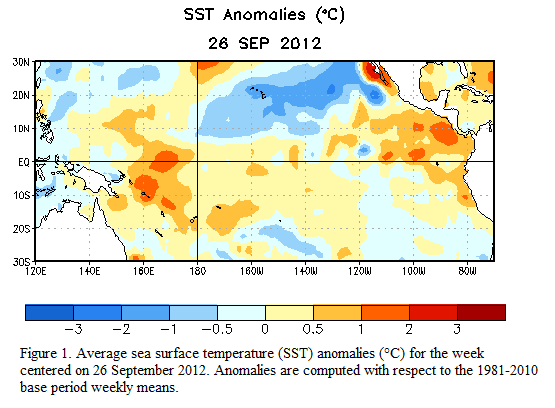 During the summer of 2012, sea surface temperatures were approximately 0.5°C above average, which is right around the threshold for weak El Niño conditions. Since late September and early October of 2012, temperatures have fallen to just 0.2°C above average. With a drop in temperatures, we are still classified to be in neutral conditions. In fact, the Climate Prediction Center (CPC) claims that is unknown as to whether or not an El Niño will form this winter. However, if it does form, it will remain relatively weak.

With ENSO conditions remaining neutral, it looks like a very weak El Niño will be the likely feature for this upcoming winter. Many long range forecasts use ENSO conditions to determine whether their regions will be wet, dry, colder, or warmer than normal. For instance, in an El Niño pattern, the southeastern United States typicaly sees wetter and cooler conditions during the winter. Of course, if El Niño does not form, it could alter or change this assumption. The lack of El Niño also favors further development of tropical cyclones in the Atlantic ocean for the next two months. El Niño typically increases the wind shear across the Atlantic, thus preventing tropical cyclones from forming. As of now, we have already seen the development of the short-lived Tropical Storm Patty, and we will likely see Tropical Storm Rafael form by this weekend. After Rafael forms, we only have four more named storms left on the list. If we run out of those names, then we’ll use the Greek alphabet.

Bottom line: Although ENSO conditions are neutral, we are still under an El Niño watch, meaning El Niño conditions could develop in a couple of months. The forecast for now is for the ENSO to remain neutral for October and November, and perhaps we will see a weak El Niño form for the 2012-2013 winter. If an El Niño develops it will remain fairly weak. From what I have seen, a lot of long range forecasts depend highly on the status of the ENSO for this upcoming winter. In fact, many forecasters are assuming El Niño conditions this winter will occur and thus highlights their ideas of who could see the snow and cold. Of course, when it comes to long range forecasts, you cannot rely on just one global feature. Instead, you have to look at other various oscillations that can impact and shape our weather.