This year’s intense El Niño – added to our warming climate – is prolonging what’s already the longest global coral die-off on record, according to scientists. 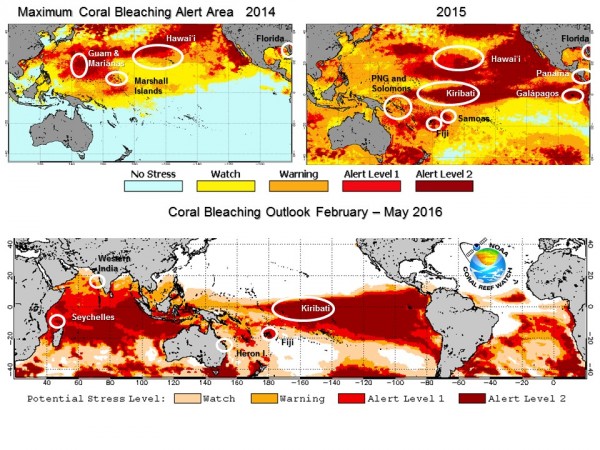 View larger. | The top images show the maximum thermal stress levels measured by NOAA satellites in 2014 and 2015 along with locations where the worst coral bleaching was reported. The bottom image shows the Four Month Bleaching Outlook for February-May 2016 based on the NOAA Climate Forecast System model along with locations. Image credit: NOAA

Global warming and the current intense El Niño are prolonging the longest global coral die-off on record, according to NOAA scientists reporting at the 2016 Oceans Sciences Meeting in New Orleans this week (February 21-26, 2016).

The researchers, who are monitoring and forecasting coral loss from disease and heat stress due to record ocean temperatures, report that the global coral bleaching event that started in 2014 could extend well into 2017.

Coral bleaching happens when corals are stressed by conditions such as high temperatures. The bleaching, or whitening, occurs when the corals expel the symbiotic algae that live in their tissues. Without the algae, corals lose a significant source of food and are more vulnerable to disease. In a severe bleaching event, large swaths of reef-building corals die. This causes reefs to erode, destroying fish habitat and exposing previously protected shorelines to the destructive force of ocean waves.

Warmer ocean temperatures caused by El Niños and global warming can lead to coral bleaching, say scientists. The first mass bleaching occurred during the 1982-83 El Niño. A global bleaching event was then confirmed in 1998 during a strong El Niño that was followed by a very strong La Niña, which brings warmer waters to places like Palau and Micronesia. A second global bleaching event occurred in 2010, during a less powerful El Niño. 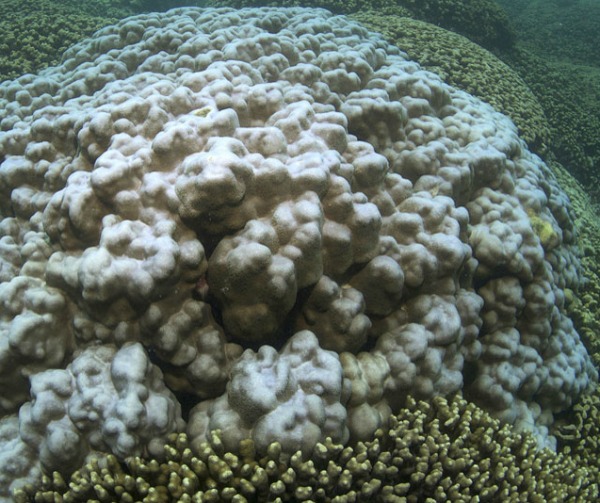 New research finds that this bleaching event has persisted for 20 months and could reach into 2017, said Mark Eakin, a biological oceanographer at NOAA in College Park, Maryland, and coordinator of NOAA’s Coral Reef Watch. Eakin said:

We are currently experiencing the longest global coral bleaching event ever observed. We may be looking at a 2- to 2½-year-long event. Some areas have already seen bleaching two years in a row.

According to Eakin, the length of the event means corals in some parts of the world have no time to recover before they are hit by more bleaching. The current global bleaching event is hammering some reefs repeatedly.

The NOAA coral scientists point out that reefs that bleached in 2015 in the Caribbean and Florida Keys have just started to recover, but may start bleaching all over again as early as July. Eakin also notes that in the Pacific, corals in Fiji’s nearshore waters are bleaching with lots of dead coral for the second consecutive year, and could be worse than last year.

Also, as bleaching events become more frequent, some reefs may not have time to recover.