El Niño has strengthened in the past several months. Will this El Niño rival the event of 1997–98? 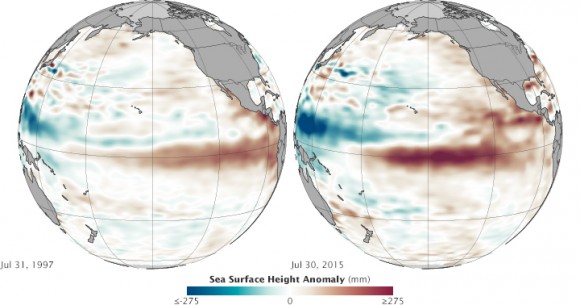 In March 2015, scientists declared that El Niño conditions – marked by warm sea surface temperatures in the equatorial Pacific – had developed. The consensus at the time was that the event was too weak and too late to have much effect on North America.

But in the past several months, warm water has been sloshing from the western Pacific toward the Americas and El Niño has strengthened. Surface waters have grown significantly warmer in the central and eastern Pacific, and conditions have become somewhat cooler and drier in the west. By the end of July, scientists at NASA and other agencies started to see some similarities between current conditions and the development of the potent El Niño event of 1997–98.

We have not seen a signal like this in the tropical Pacific since 1997. It’s no sure bet that we will have a strong El Niño, but the signal is getting stronger. What happens in August through October should make or break this event.

The image above is a comparison of sea surface height in the Pacific as measured at the end of July in 1997 and 2015. Comparing the two years, 1997 seems slightly less intense. But trade winds collapsed and the eastern Pacific warmed dramatically from August through November 1997, setting the stage for a turbulent winter that brought flooding rains and landslides across the West Coast of North and South America.

This El Niño is getting billed as the ‘great wet hope.’ Many people in the American West are looking to El Niño to save them from drought.

But he cautioned that “1997 was mayhem,” and drenching rains on a parched landscape are just as hazardous as a drought. And even if the rains come, they do not necessarily solve drought problems in areas that rely on snow pack for summer supplies. Patzert said:

It took a long time to get into this drought, and it is more of a systemic problem than just a lack of rain or snowfall.

El Niño typically peaks between December and April, so only time will tell if this event will be potent. 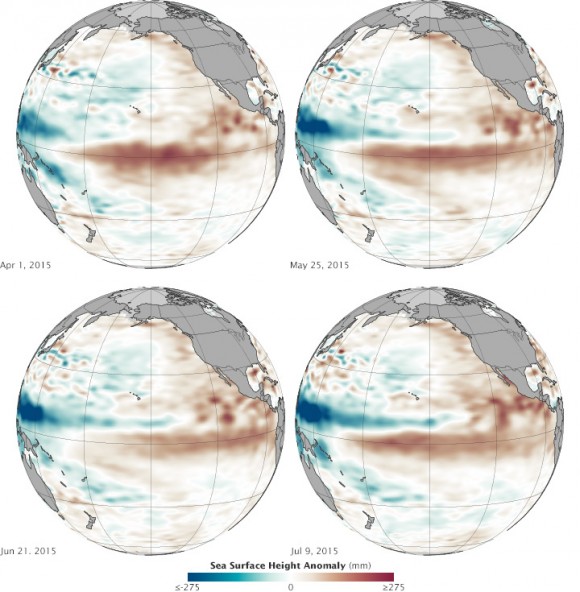 Below you can see an animation of the same data from January 1 through July 31, 2015. Note how pulses of warmer water seem to move from west to east across the Pacific basin. There is a subtle signal in January, and then increasingly stronger pulses in March, May, and July.

The pulses of warmer water moving across the ocean are Kelvin waves. Sea level is naturally higher in the western Pacific; in fact, it is roughly 40 to 50 centimeters (15-20 inches) higher near Indonesia than off of Ecuador. Much of this difference is due to tropical trade winds, which predominantly blow from east to west across the Pacific Ocean, piling up the water near Asia and Oceania. When those trade winds ease and bursts of wind come out of the west, warm water from the western Pacific sloshes east in vast and deep waves and evens out sea level a bit. As the warm water piles up in the east, it suppresses the natural upwelling that usually keeps waters cooler along the Pacific coasts of the Americas.

The seas and skies have been doing just that in 2015. According to observations compiled by the National Oceanic and Atmospheric Administration (NOAA), at least three sizable west wind bursts have occurred in the Pacific since March, and each came shortly before a Kelvin wave rolled across the basin. Those waves have raised water temperatures in the central and eastern Pacific by as much as 1.6 degrees Celsius (2.9° Fahrenheit) above normal, making for a “strong” El Niño. The warmers waters off the west coast of the Americas have led to warmer and more humid weather ashore, as well as soaking bursts of rain. At the same time, Indonesia and other parts of the western Pacific have been unusually dry.

Bottom line: In the past several months, warm water has been sloshing from the western Pacific toward the Americas and El Niño has strengthened. By the end of July, 2015, scientists at NASA and other agencies started to see some similarities between current conditions and the development of the potent El Niño event of 1997–98.