Scientists think there may be a link between the new volcanic activity at Mount Sinabung in Indonesia and three recent megathrust earthquakes. 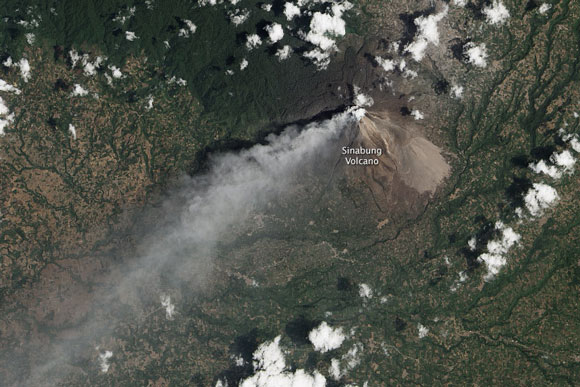 Mount Sinabung in Indonesia was once considered a dormant volcano, until it erupted for a brief one month period in 2010. Then, on September 15, 2013, it began erupting again and the volcanic activity has continued until today.

Understanding why volcanoes come out of dormancy is no easy task for scientists, but a paper published last year in Solid Earth suggests that some of the recent megathrust earthquakes in Sumatra could be to blame.

Mount Sinabung is one of several volcanoes that lie along the Sumatra Trench subduction zone in the Indian Ocean. This region, which is part of the Ring of Fire, is very active geologically. The Lake Toba caldera, which is about 40 kilometers (25 miles) southeast of Mount Sinabung, was the site of the last known supervolcanic eruption on Earth about 75,000 years ago. 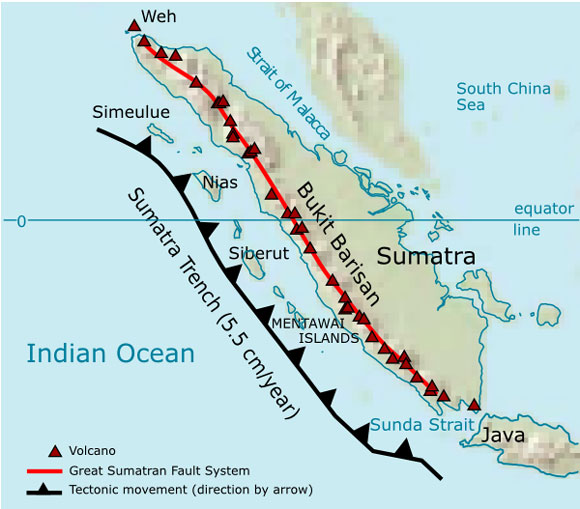 Map showing the locations of volcanoes in relation to the Sumatra Trench. Image Credit: Indon via Wikipedia. 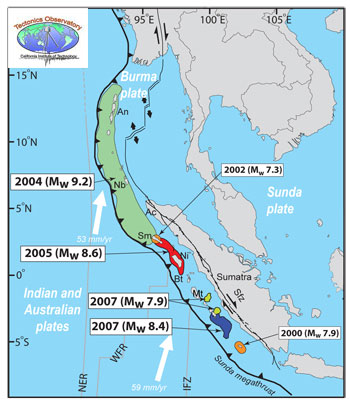 Large subduction type earthquakes can reactivate volcanic arcs because they change the types and amounts of tectonic stress underground. While compressional stresses are released after a subduction earthquake, this can lead to strike and slip motions and other types of tectonic stress. Such movement, in turn, can open new channels for magma flow and increase the overall permeability of the volcanic system. It can also cause changes in pore pressures that make magma more likely to erupt.

Long-term pulses of increased volcanic activity have also been observed after megathrust earthquakes in other regions of the world including Chile and Japan, according to the paper that was published in Solid Earth.

Importantly, the scientists note that the idea that megathrust earthquakes can trigger volcanic eruptions is not new. Charles Darwin actually documented increased volcanic activity in Chile after the magnitude 8.5 Conceptíon earthquake in 1835. He published these findings in 1840.

Authors of the 2014 Solid Earth paper include Matteo Lupi and Stephen Miller.

While the current ongoing eruption at Mount Sinabung is listed only at 2 on the volcanic explosivity index, which can go as high as 8 based on the amount of material that is ejected, this eruption event has been very destructive. Sixteen people were killed during an explosive eruption at Mount Sinabung on February 1, 2014, and thick ash has damaged many of the local chili pepper, cabbage, and tomato crops. More recently, heightened activity in early June 2015 prompted authorities to issue their highest alert level for a volcano and residents were told to evacuate. Prior to this activity, no confirmed eruptions have occurred at Mount Sinabung for at least 400 years.

Bottom line: Mount Sinabung in Indonesia, once considered a dormant volcano, began erupting in 2010. A paper published in 2014 in Solid Earth suggests that some of the recent megathrust earthquakes in Sumatra could be to blame.