NASA scientists were in the right place at the right time this summer to capture photos of a fresh landslide, caused by an Alaska earthquake. 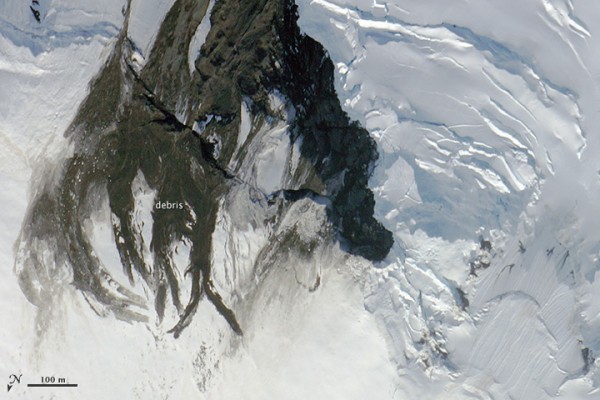 This photo was taken on July 16, 2014, one day before the earthquake at Seward Glacier. Rocks and debris from a previous landslide litter the young, steep slopes. NASA Earth Observatory images via Jesse Allen and Kelly Brunt, MABEL campaign. 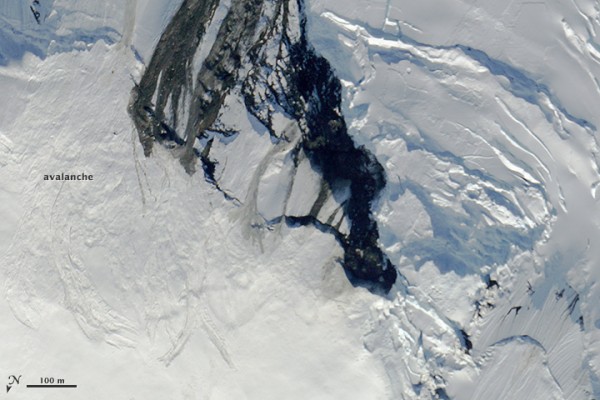 When scientists flew back over the site on July 21, snow from a large avalanche had cascaded down the mountainside and covered the older slide. NASA Earth Observatory images via Jesse Allen and Kelly Brunt, MABEL campaign.

A magnitude-6.0 earthquake struck beneath Seward Glacier in northwestern Canada on July 17, 2014, and, by a lucky coincidence, NASA scientists, engineers, and pilots in nearby Fairbanks, Alaska were gearing up for near-daily flights over the area. They weren’t looking for landslides; they were developing processes for interpreting data from ICESat-2, a satellite scheduled for launch in 2017. Still, they were able to capture the image above of the July 17 landslide, apparently caused by the earthquake, which had obscured remnants of an older slide.

NASA said the team was already scheduled to make two flights near Seward Glacier in late July when a colleague back in Maryland alerted them to the earthquake, adding:

Their flight paths were taking them as close as 2 kilometers (1.2 miles) from the epicenter of the earthquake. Flights over the region just before and after the event provided an uncommon view of an earthquake’s effect on the snow-and-ice covered landscape.

It’s obvious that many big debris and snow slides happened in this short time window. This is a super steep area, so you get a lot of activity here. The bulk of the activity in this case is probably associated with the July 17 quake.

Photos from the team suggest that the earthquake also might have prompted the draining of a supraglacial lake. Read more about the avalanche and possible draining of the lake at NASA Earth Observatory. 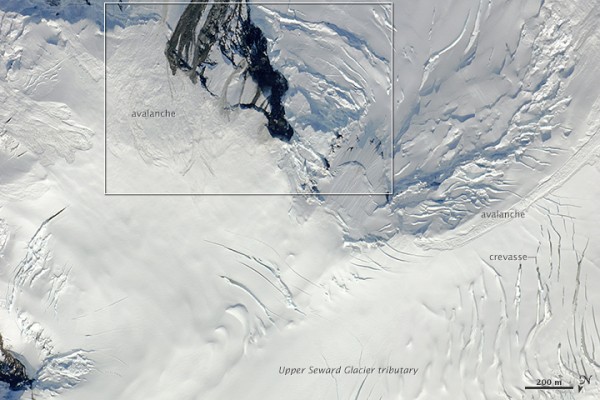 Bottom line: NASA scientists were in the right place at the right time this summer to captured photos of a fresh landslide, caused by an Alaska earthquake.