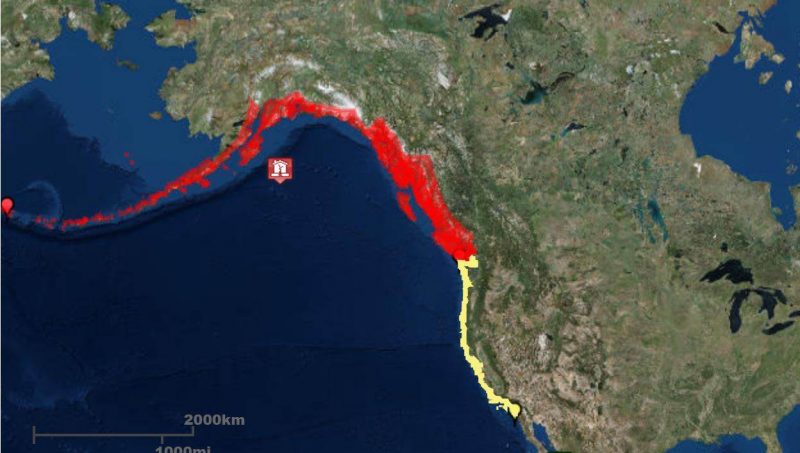 A National Weather Service map showing the red tsunami warning zone as well as the yellow tsunami watch zone of January 23, 2018. The original watches and warnings ran south from Alaska, into Washington and California and also included Hawaii. At this writing (12:30 UTC, or 6:30 EST), no tsunami watch, warning or advisory is in effect according to the Pacific Tsunamic Warning Center.

The U.S. Geological Survey (USGS) reported a very large earthquake this morning (January 23, 2018) in the Gulf of Alaska. It was originally reported at 8.2 magnitude, then downgrade to 7.9 magnitude; both represent very powerful earthquakes. The large earthquake, first of numerous aftershocks, struck at 9:31 UTC (3:31 a.m. CST); translate to your time zone. It occurred 174 miles (280 km) southeast of Kodiak, Alaska.

The Pacific Tsunami Warning Center (PTWC) issued tsunami watches or warnings for large portions of the Pacific, including a watch for the U.S. west coast from Washington to California as well as Hawaii, and a tsunami warning for the coast of Alaska and the Canadian province of British Columbia. Subsequently, all watches and warnings were cancelled, but not before a mass of confusion on Twitter and other news outlets.

There were reports of some panic in Kodiak, Alaska (sirens blaring, people being woken from sleep), near the quake’s epicenter. Waters were then said to be receding in Kodiak, and waves were said to have been “small.”

We have not yet seen reports of damages or injuries from this event.

The PTWC – which was still in its calculation process when this advisory was issued at 10:17 UTC (4:17 a.m. CST) on January 23 – said tsunami waves were originally forecast to be less than one foot (0.3 meters) above the tide level for the coasts of Guam, Hawaii and northwestern Hawaiian Islands, Japan, Johnston Atoll, Mexico, Midway Island, Northern Marianas, Russia, and Wake Island.

The large earthquake caused other effects, as described by USGS below:

Bottom line: A 7.9-magnitude earthquake struck on January 23, 2018 in the Gulf of Alaska. Tsunami watches and warnings issued. The situation is still unfolding.