And plate tectonics may be essential for life. A new theory of Earth’s composition suggests another factor to consider in the search for habitable exoplanets. 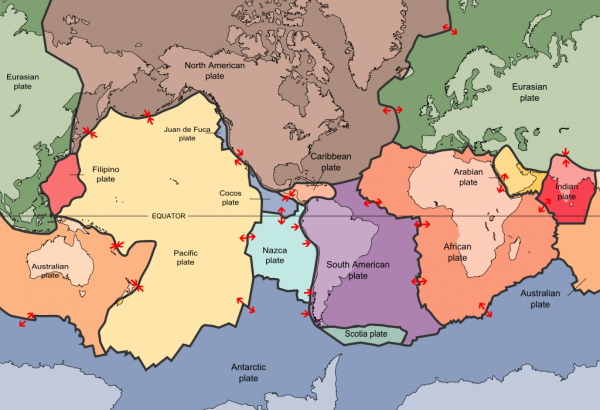 The layer of the Earth we live on is broken into a dozen or so rigid slabs – called tectonic plates by geologists – that are moving relative to one another. Image via USGS

In recent years, scientists have begun to discuss whether plate tectonics – the continual movement of great land and ocean plates across Earth’s surface – is essential for life on a planet. On Venus, for example, the lack of plate tectonics might have helped bring about a runaway greenhouse effect, making temperatures on that world hot enough to melt lead. In a paper published on July 20, 2015 in the journal Nature Geoscience, Matthew Jackson of UC Santa Barbara and Mark Jellinek of the University of British Columbia discuss a new theory on what causes plate tectonics. They say that a planet’s bulk composition – what elements it contains – determines whether plate tectonics can happen, and therefore whether that planet can have a climate and other features suitable for life.

Jackson said in a statement from UC Santa Barbara on Monday that:

In 2013, Jackson and Jellinek had published a new compositional model of the Earth that assumed a 30 percent reduction in the uranium, thorium and potassium content in the planet. The decay of these naturally occurring elements generates almost all of Earth’s radioactive heat.

Their new paper takes the 2013 model further by suggesting that – if the planet had as much uranium, thorium and potassium as older models of Earth implied – plate tectonics might not be possible. Jackson said:

If this is the case, you can end up with a planet that has only one big plate and can become an extreme greenhouse like Venus. The new compositional model gives Earth a sweet spot of its own where its interior is neither too hot nor too cold — a place that allows our current mode of plate tectonics to operate.

Jackson and Jellinek say their new model of Earth’s composition – in which uranium, thorium and potassium govern whether or not plate tectonics can occur – should give astronomers looking for habitable exoplanets another parameter to consider. Jackson said:

Our hypothesis suggests that among the rocky exoplanets, there’s another dial that’s important to turn when considering whether a planet is habitable or not: its bulk composition.

Bulk composition determines its uranium, thorium and potassium abundance, which governs its internal radiogenic heating and ultimately dictates whether or not plate tectonics can happen — as well as the amount of volcanism and the release of CO2 from a planet that can occur.

These are the variables that determine whether a planet can support a habitable climate.

Bottom line: Abundances of Earth elements uranium, thorium and potassium may dictate whether plate tectonics can happen. And plate tectonics may be essential for life on a planet. A new theory of Earth’s composition suggests another factor to consider in the search for habitable exoplanets.