Scientists studying tiny ancient meteorites have found evidence that Earth’s atmosphere used to contain much more carbon dioxide, and maybe less nitrogen, than it does now. 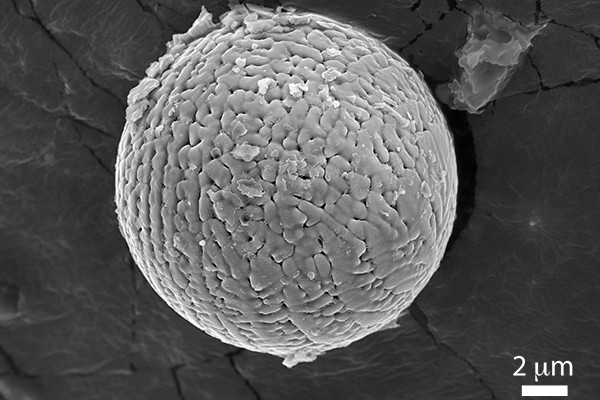 High-resolution microscope view of a tiny iron micrometeorite the size of a grain of sand. Analysis of these particles shows that Earth’s atmosphere used to contain a lot more carbon dioxide 2.7 billion years ago. Image via Andrew Tomkins/ Penn State.

What was Earth’s atmosphere like a few billion years ago, early in its history? Researchers at Penn State say they’ve found some clues by analyzing iron micrometeorites in ancient soils. These particles from space – a subset of cosmic dust – suggest that carbon dioxide made up 25% to 50% of Earth’s atmosphere 2.7 billion years ago. That’s in contrast to today’s levels of carbon dioxide of around 0.04%. There might also have been less nitrogen then than in our present-day atmosphere; now nitrogen is by far our atmosphere’s primary gas.

The new peer-reviewed findings were published in the journal Proceedings of the National Academy of Sciences on January 21, 2020.

Carbon dioxide concentrations have varied widely over the Earth’s 4.54-billion-year history. This new work helps quantify the elements that made up Earth’s atmosphere in the very distant past.

The tiny iron micrometeorites that were studied are no larger than grains of sand. They were discovered in ancient soils – called paleosols – that are about 2.7 billion years old. The soils were collected in the Pilbara region of Western Australia. These scientists believe the micrometeorites fell from space during the Archean eon, when the sun was weaker than today.

How do the scientists determine atmospheric composition from such small particles? As the meteorites streaked through the atmosphere, they melted from the heat. As they encountered the gases in the atmosphere, they became oxidized. That oxidation can still be seen today, and analyzed. Rebecca Payne, lead author of the study at Penn State, said in a statement:

This is a promising new tool for figuring out the composition of the upper atmosphere billions of years in the past.

It was previously thought that free oxygen molecules in the upper atmosphere oxidized the meteorites, but the new research refutes that idea. In order for that scenario to be plausible, the amount of oxygen at the time would have had to be similar to what it is now. But other research shows there wasn’t as much oxygen as there is today, or even none at all. That leaves carbon dioxide as the gas that could have oxidized the meteorites. That conclusion is based on new analysis using photochemical and climate models. 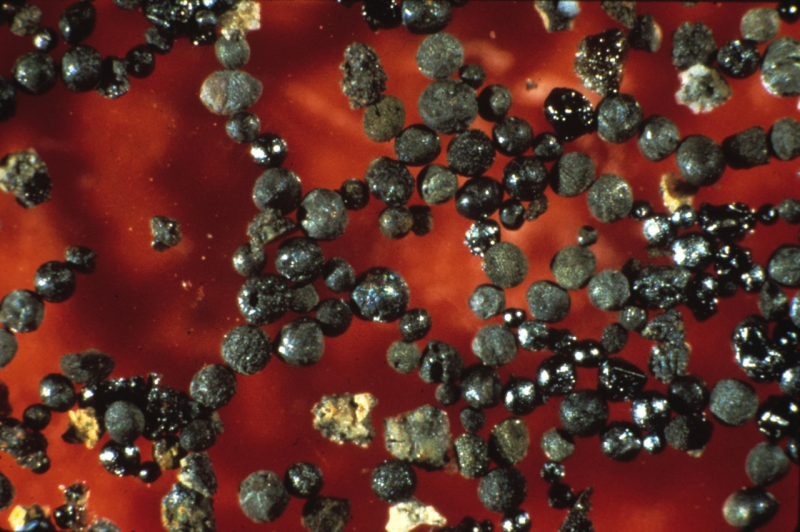 Another example of tiny iron micrometeorites. These were collected from the deep ocean. Image via Donald Brownlee/ University of Washington.

But that analysis also indicates that at least 25% of the atmosphere must have been composed of carbon dioxide, and perhaps a lot more. This fits with previous atmospheric models, which said there was much less oxygen early on, until the Great Oxidation Event about 2.4 billion years ago. Owen Lehmer, a doctoral student at University of Washington, stated:

The other key finding is that there was probably a lot less nitrogen in Earth’s atmosphere 2.7 billion years ago than there is now. Today, nitrogen makes up about 78% of the atmosphere. There is a problem, however, in what we know about conditions at the time, nearly three billion years ago. With so much carbon dioxide, the Earth should have been warmer, but evidence shows it was not. In fact, it was partly covered by glaciers. That can be explained, however, if there was less nitrogen than today. That would cause lower atmospheric pressure, which then could allow for both higher carbon dioxide levels and cooler temperatures. According to Jim Kasting, an Evan Pugh Professor at Penn State:

There are data, referenced in our paper, that support lower nitrogen concentrations during this time. Our study of micrometeorite oxidation falls in line with that interpretation. The possibility that our major atmospheric gas, nitrogen, was less abundant in the distant past is really intriguing. 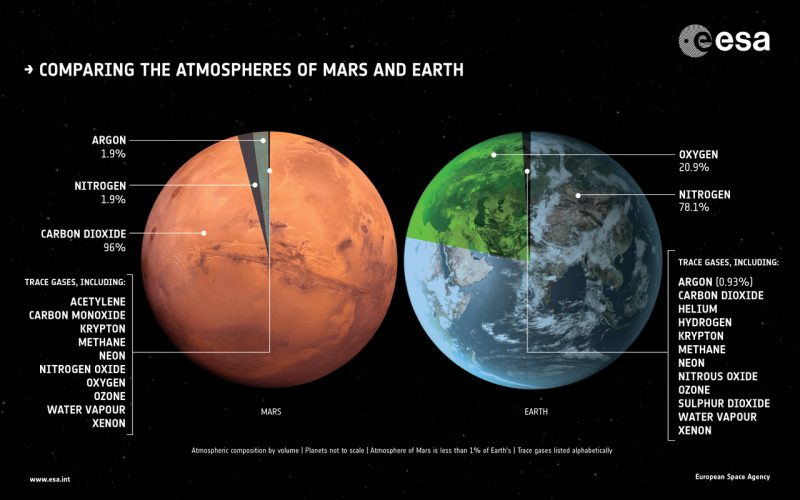 Comparison of the current atmospheres of Earth and Mars. The Martian atmosphere is primarily composed of carbon dioxide, just like Earth’s used to be, although it is much thinner. Image via ESA.

There has been much debate about how much carbon dioxide was in the atmosphere a few billion years ago, and this new study will now add to that. Various studies have often contradicted each other; this is because they mostly relied on ancient soils, which can be affected by weather or ground cover. They also tend to reflect conditions in the lower atmosphere rather than the upper atmosphere, where the meteorites would have first been affected and became oxidized. As Payne said:

It was getting difficult to figure out where the agreement should have been between different paleosol studies and climate models. This is interesting, because it’s a new point of comparison. It may help us find the right answer about atmospheric carbon dioxide in the deep past.

These findings may also help scientists better understand the evolution of the atmosphere on Mars. It also is predominately carbon dioxide, but is much thinner than Earth’s, and its composition early on is still a matter of debate as well. There is also similar disagreement among scientists as to how the Martian atmosphere was once thick and warm enough for liquid water to exist on the planet’s surface, when some evidence still points to a colder climate for most of Mars’ history.

Venus’ atmosphere is also predominately carbon dioxide, but it is much thicker than Earth’s with crushing surface pressure. It is thought that Venus used to be more Earth-like (as we know it now) in its younger days, yet ended up with a dense carbon dioxide atmosphere in the present day, which has turned the planet into a scorching hot world due to the greenhouse effect.

Figuring out the true composition of the atmosphere of the early Earth will help scientists better understand how the atmosphere has changed over the past few billion years, and what conditions were like when life first started to evolve. This data can then be extrapolated to other rocky planets with atmospheres, like Mars or Venus, to understand how they took such different evolutionary paths. Lehmer said:

Life formed more than 3.8 billion years ago, and how life formed is a big, open question. One of the most important aspects is what the atmosphere was made up of, what was available and what the climate was like. 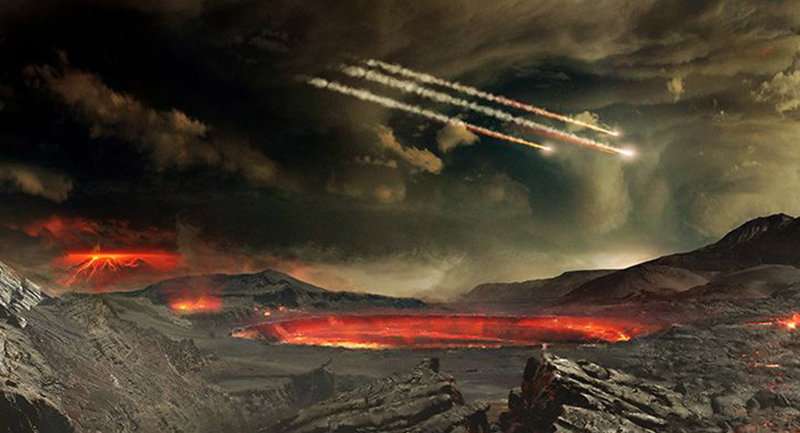 Bottom line: New analysis of tiny ancient meteorites indicates that Earth’s atmosphere used to contain much more carbon dioxide than it does now.

Source: Oxidized micrometeorites suggest either high pCO2 or low pN2 during the Neoarchean