The National Research Council has released a new report that recommends an early warning system for detecting abrupt impacts from climate change.

The National Research Council (NRC) has released a new report that recommends the establishment of an early warning system to detect abrupt impacts from climate change. Abrupt changes in Earth’s climate system or abrupt changes in human and natural systems caused by gradual climate change could be especially detrimental given that society would have little time to adapt. The report, which is titled “Abrupt Impacts of Climate Change: Anticipating Surprises,” was released on December 3, 2013.

Abrupt or sudden changes in a system can occur when critical thresholds, also called “tipping points,” are crossed. Boiling water represents a simple example of how things can change suddenly when critical thresholds are crossed. Up until a certain temperature, the water in a pan on your stove will remain in liquid form. However, once the temperature heats up beyond the threshold of the boiling point (100 degrees Celsius), the water rapidly turns into gas and forms bubbles in the pan. 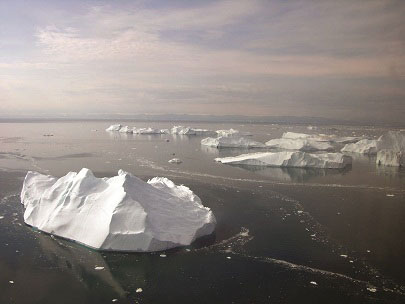 Two types of events that could lead to abrupt changes in the climate were closely evaluated in the NRC report. These events include the release of large amounts of methane from permafrost and undersea ice in the Arctic and the shutdown of ocean circulation patterns in the northern Atlantic. If such events were to occur, drastic changes on Earth could follow such as the failure of crops and fisheries. The report concluded that while these events are unlikely to occur this century, they are still of high concern over longer time periods. Moreover, given the extent of the impacts that such events could have, more extensive monitoring networks should be established in these critical regions.

Two issues of immediate concern identified in the report are the rapid loss of sea ice in the Arctic and the extinction of marine and terrestrial species. Declines in Arctic sea ice have been especially pronounced over the past few decades, and this could lead to major changes in polar ecosystems and impact weather patterns across portions of the Northern Hemisphere. The loss of biodiversity for climate sensitive species such as coral is predicted to be high over the next few decades.

Sea level rise was also evaluated in the report. Abrupt changes on Earth could occur if the west Antarctic ice sheet was to destabilize. However, the report notes that the probability of such an event occurring is not well understood and requires more research. Abrupt changes in coastal communities caused by levee breaches were noted as a concern in the report. 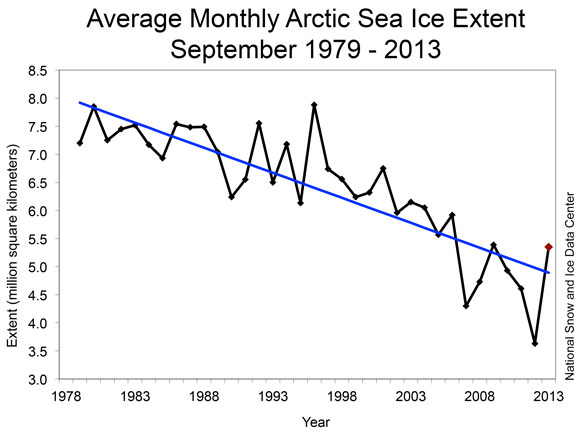 Arctic sea ice extent for the month of September during 1979 to 2013. Image Credit: National Snow and Ice Data Center.

James White, professor of geological sciences at the University of Colorado in Boulder, commented on the new report in a press release. He said:

Research has helped us begin to distinguish more imminent threats from those that are less likely to happen this century. Evaluating climate changes and impacts in terms of their potential magnitude and the likelihood they will occur will help policymakers and communities make informed decisions about how to prepare for or adapt to them.

To address the risks posed by abrupt changes on Earth, the report recommends the establishment of an Abrupt Change Early Warning System (ACEWS) as part of an overall risk management strategy. Such a system may help us to better anticipate surprises and reduce any detrimental impacts.

How do we balance needs of energy, water, and climate?