Snow, heavy rain and strong winds expected across parts of U.S. and Canadian east. With trees already leafed out, this winter storm could cause power outages and more. 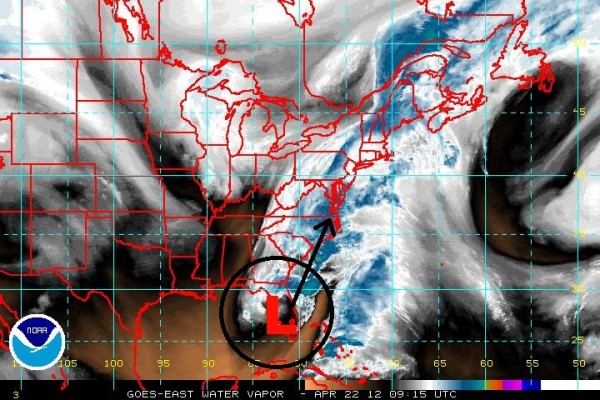 An area of low pressure in the Gulf of Mexico will travel northeast and trigger strong winds, heavy rain, and snow across New England and Canada. Image Credit: NOAA

Will they call it the Earth Day storm? A very strong and dynamical storm system is developing across the eastern United States today (April 22, 2012). On Saturday evening (April 21), an area of low pressure was strengthening across the Gulf of Mexico and pushing into Florida, which resulted in a tornado watch for parts of central and southern Florida. As this system pushes northeast, it will rapidly intensify, with a barometric pressure equivalent to a strong tropical storm or Category 1 hurricane (~990 millibars). I find it ironic that New England could see their biggest snows outside of the winter months. Autumn snow occurred around October 30, 2011 when a strong area of low pressure pushed into New England. Now, a spring storm will produce heavy snow in parts of eastern West Virginia, western Pennsylvania, and parts of the northern Appalachian Mountains that stretch into parts of Virginia and North Carolina. Parts of eastern Ontario and Quebec could see snowy weather and even freezing rain from this storm as well. The biggest concern about this storm will be the heavy rains and strong winds that could produce numerous problems across the region. 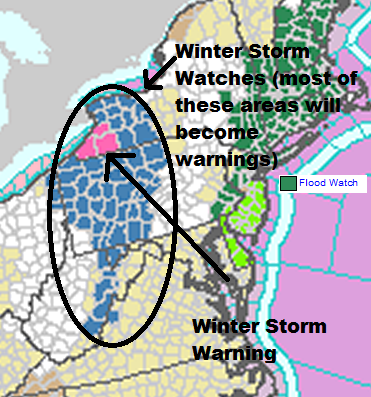 The National Weather Service at State Park, Pennsylvania has used strong wording for this system:

SURFACE LOW PRESSURE WILL FORM ALONG THE SOUTH CAROLINA COAST EARLY SUNDAY AND MOVE NORTH ALONG THE EASTERN SEABOARD REACHING THE DELMARVA PENINSULA EARLY SUNDAY NIGHT. A DEEPENING…AND SLOW MOVING UPPER LOW WILL MOVE NORTHEAST FROM THE OHIO RIVER VALLEY SUNDAY AFTERNOON AND CROSS CENTRAL OR EASTERN PENNSYLVANIA MONDAY. THE FAVORABLE TRACK OF BOTH OF THESE FEATURES WILL LEAD THE THE POTENTIAL OF A HEAVY…AND DESTRUCTIVE LATE SEASON SNOWFALL ACROSS THE NORTHERN AND WESTERN MOUNTAINS OF PENNSYLVANIA. THERE IS A DISTINCT THREAT FOR WIDESPREAD DOWNED TREES AND POWER OUTAGES FROM THE HEAVY SNOW AND POTENTIALLY STRONG NORTHERLY WINDS FROM THIS STORM.

This image shows what the GFS, one of our weather models, predicts in regards to snowfall accumulations. These totals could be lower or higher, and this does not portray exactly how much these areas could see. Image Credit: Weather Caster

If this storm developed in the middle of January, the issues would likely not be as significant because many of the leaves on the trees would be nonexistent. However, everything is in full bloom. Heavy snow and strong winds will be easily captured by the trees, and this could result in numerous power outages. In higher elevations, snowfall totals could accumulate over a foot, but frankly, I am not so confident that we will see that much snow. Generally, I believe three to five inches are possible, with a maximum of ten inches in higher elevations. With the recent warm weather across the region, the initial beginning of the snow will likely melt. Models do not have an easy time with accumulations. Most of the time, they show more than what actually occurs.

Possible rainfall totals from the Hydrometeorological Prediction Center for the next three days across the east coast.

Rainfall will be welcomed into the region as parts of the U.S. East Coast have been particularly dry. Rainfall totals should add up to one to three inches along the coast. As you can see in the image above, a majority of New England are in flood watches. A stationary front will be draped across the eastern coast, and the strengthening area of low pressure will move along this boundary. As the low pressure moves north-northeast along the front, heavy rains will develop as the storm intensifies. The storm will be able to draw the cold air in Canada and bring it further south, which is why snowfall is possible across western New York, Pennsylvania, and West Virginia. Please remember to avoid flooded streets if they do occur. If you are not sure you should travel through flooded roads, please remember: Turn around, don’t drown!

Bottom line: A rare snowstorm could impact cities such as Buffalo, New York and Pittsburgh, Pennsylvania in late April 2012. Sustained winds of 30 mph with gusts over 50 mph are possible, which will likely cause power outages throughout the region. Snowfall totals will likely be in a range of three to five inches with higher elevations possibly seeing around ten inches of accumulations. For parts of Maine and everyone down the east coast, heavy rain will be the main story as many areas will see one to three inches. Some areas could see higher rainfall amounts in heavier storms. Overall, this storm has the potential to be significant across this region. Everyone in New England should take care of their outdoor activities before Sunday evening and make sure everything is strapped down so the wind does not blow anything away. It will be an interesting storm to follow and track as it evolves Sunday and Monday.