Dust devils on Earth and Mars

Researchers spent 5 years studying dust devils in earthly deserts. They said their research has implications for climate and weather on both Earth and Mars and for human health. 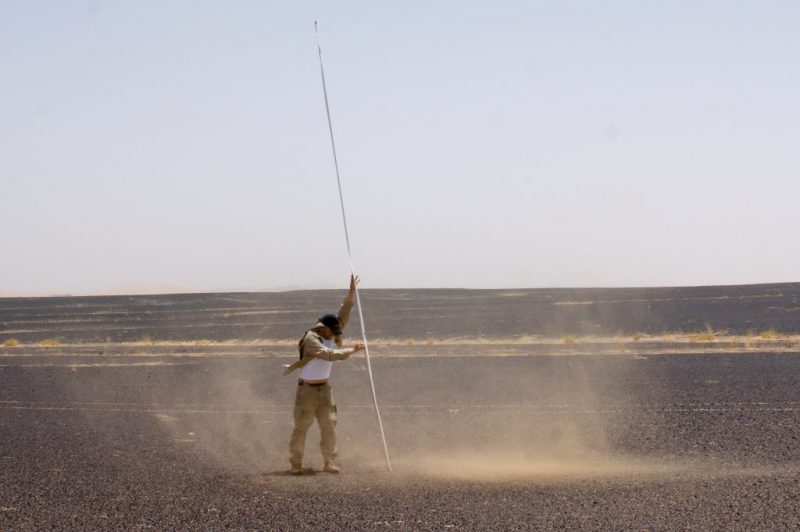 Sampling of a dust devil in Morocco in 2016: “The method for sampling is simple, although it involves getting sandblasted. Essentially, we cover an aluminium pipe with double sided sticky tape and run into an active dust devil.” Image via Jan Raack/ Dennis Reiss/ Europlanet.

Geologist Jan Raack of The Open University in the UK and his colleagues have spent five years studying dust devils in three different deserts on Earth, in China, Morocco and the U.S. The researchers took samples of grains lifted by dust devils at different heights, studied tracks left by dust devils on Earth’s surface and measured physical and meteorological properties of dust devils. Their work has shown that around two-thirds of the fine particles lifted by dust devils can remain suspended in Earth’s atmosphere and be transported around the globe. In a statement, they said the findings:

… have implications for the climate and weather of both [Earth and Mars] and, potentially, human health here on Earth.

Raack is presenting these results this week (September 18, 2017) at the European Planetary Science Congress (EPSC) 2017 in Riga, Latvia.

Dust devils are common on both Earth and Mars, but scientists don’t entirely understand their structure. They do know that terrestrial dust devils act similarly to those on Mars; it’s thought that about half of the dust lifted into the martian atmosphere each year comes from dust devils. These researchers said their work gives important new insights into the contribution of dust devils to mineral aerosols in planetary atmospheres. 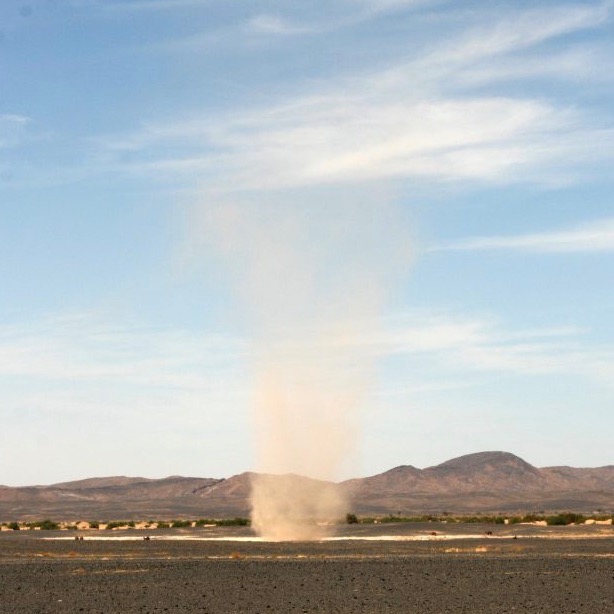 Very large and intensive dust devil seen by the researchers in Morocco in 2016. Note the camels (small dark dots) right next to the dust devil for scale. Image via Jan Raack/ Dennis Reiss/ Europlanet.

The method for sampling is simple – although not actually that pleasant to carry out as it involves getting sandblasted. Essentially, we cover a 5-meter aluminium pipe with double sided sticky tape and run into an active dust devil. We hold the boom upright in the path of a dust devil and wait until the dust devil passes over the boom. Numerous grains are collected on the sticky tape, which are preserved on-site by pressing sections of the tape from different heights onto glass slides.

Back in the lab, the glass slides are analysed under an optical microscope and all grains measured and counted to gain detailed relative grain size distributions of the sampled dust devils.

Animation of researcher Jan Raack running to a dust devil and acquiring a successful sample of it, during a field campaign in Morocco in 2016. Image via Jan Raack/ Dennis Reiss/ Europlanet.

The results presented this week at EPSC 2017 focus on samples taken during field campaigns in the south and southwest of Morocco. Raack said:

We found that the dust devils we measured have a very similar structure, despite different strengths and dimensions. The size distribution of particles within the dust devils seems to correspond to the distribution of grain sizes in the surface they passed over. We have been able to confirm the presence of a sand-skirt – the bottom part of the dust devil with high concentration of larger sand grains – and most particles were only lifted within the first meter. However, the decrease in grain diameter with height is nearly exponential.

In the dust devils they sampled, the team found that around 60-70% of all the fine dust particles (with diameters up to three hundredths of a millimeter) appear to stay in suspension. These small mineral aerosols can be transported over long distances on Earth and have an influence on the climate and weather, they said. The particles can also reach populated areas, affecting air quality and human health.

On arid Mars, where most of the surface is desert-like and the dust content is much higher, the impact must be even larger, the researchers said.

Further analysis of the datasets will include meteorological measurements of the dust devils that will be used to interpret data obtained by landers and rovers on Mars, including NASA’s ongoing Curiosity rover explorations on Mars, and InSight lander mission (scheduled to launch 2018), plus ESA’s upcoming ExoMars mission. 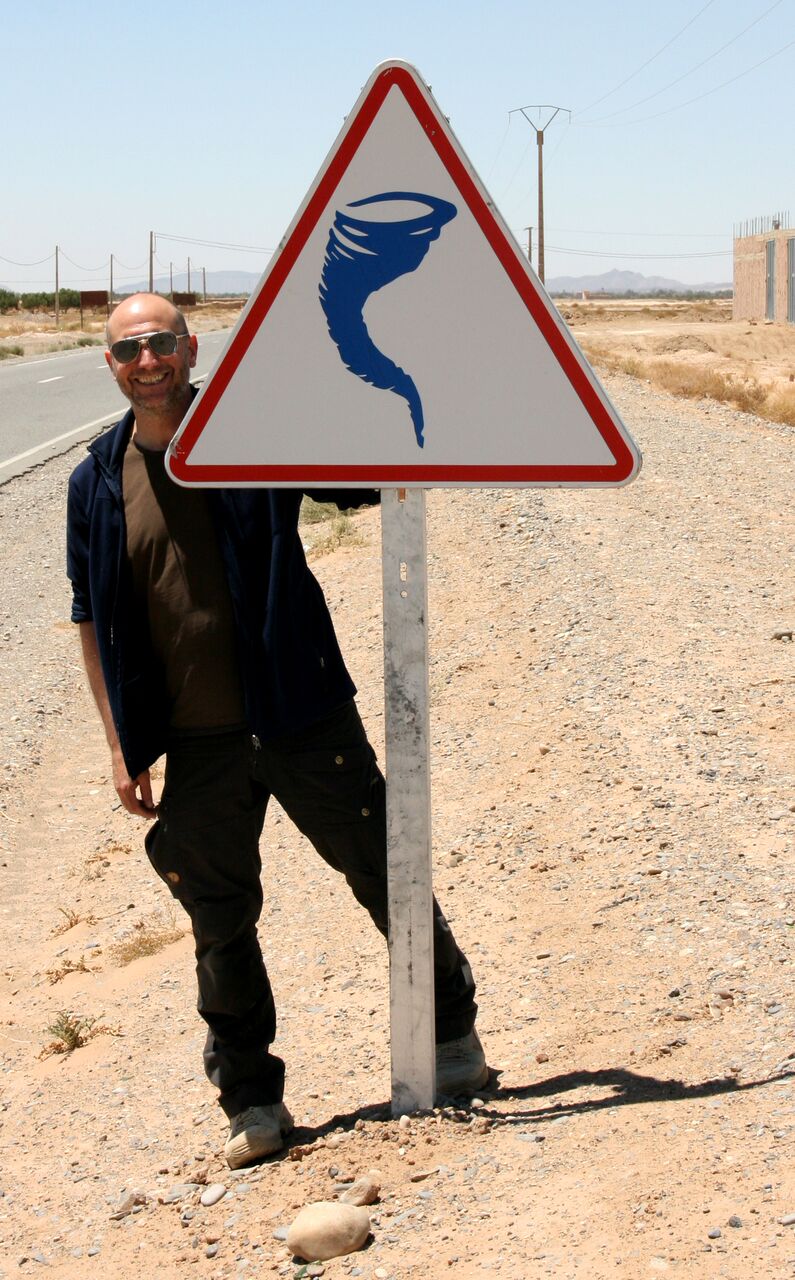 In deserts, where dust devils may be frequent and bothersome to traffic, you might see a sign like this one. Photo shows researcher Dennis Reiss next to a dust devil traffic sign, taken in Morocco in 2016. Image via Jan Raack/ Dennis Reiss/ Europlanet.

Bottom line: Researchers spent 5 years studying dust devils in China, Morocco and the US. They found 2/3s of fine particles lifted by dust devils stay suspended in the air, to be transported around the globe.