Dung beetles use the Milky Way to navigate at night

Scientists have discovered that African dung beetles can use the Milky Way to help them navigate at night.

Scientists have discovered that African dung beetles can use the Milky Way to help them navigate at night. The research was published on January 24, 2013 in the journal Current Biology. 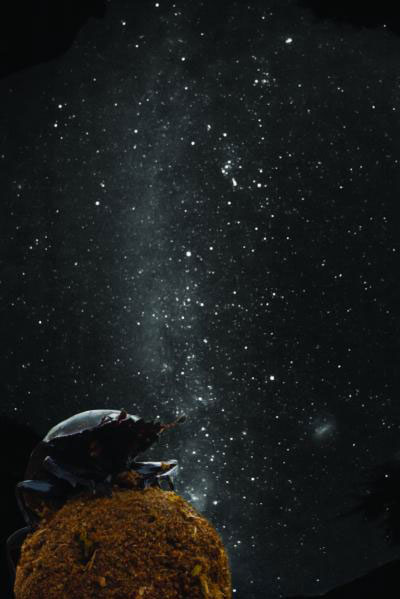 Navigating at night can be very difficult for species that rely on visual cues to move around. Navigation tends to be easier when the moon is bright, but on moonless nights, things can get complicated.

An international team of scientists working in Africa were surprised to notice that a group of dung beetles still managed to navigate efficiently during moonless nights. They suspected that the beetles were using the starry sky as a navigational aid.

Dung beetles are known for rolling up balls of dung for later use as food. Once they collect the dung, the beetles quickly roll the ball away from the dung pile to avoid having it stolen by other beetles. They do this by moving in a straight line.

This research is believed to be the first study to document the use of the Milky Way for orientation in the animal kingdom.

Marie Dacke, lead author of the study, is an Assistant Professor at Lund University in Sweden. Her current research is focused on gaining a better understanding of the nocturnal and diurnal navigational systems used by insects. She commented on the study’s findings in a press release:

Dung beetles are known to use celestial compass cues such as the sun, the moon, and the pattern of polarized light formed around these light sources to roll their balls of dung along straight paths. Celestial compass cues dominate straight-line orientation in dung beetles so strongly that, to our knowledge, this is the only animal with a visual compass system that ignores the extra orientation precision that landmarks can offer.

Bradley Mullens, an entomologist at the University of California in Riverside who was not involved in the research, told the Los Angeles Times:

I would not be surprised if other nocturnal insects — or maybe other animal groups — might be able to use a diffuse but directional cue such as the Milky Way. Maybe this paper will stimulate more studies of that nature.

Bottom line: Scientists have discovered that African dung beetles use the Milky Way to help them navigate at night. This research is believed to be the first study to document the use of the Milky Way for orientation in the animal kingdom. The research was published on January 24, 2013 in the journal Current Biology.

Which spiral arm of the Milky Way contains our sun?