Drought in parts of the United States 2012

The Deep South is experiencing the least amount of rainfall, which is typical in a La Niña pattern. Will the drought conditions persist or end this summer?

While places in the Pacific Northwest have seen their share of decent rains, other areas across the United States have not been as fortunate. Last summer, the biggest headlines of heat and drought came across portions of the southern-central United States in parts of Texas, Oklahoma, and New Mexico. Today, the biggest concern for continued drought persists in a large portion of Georgia, Florida, and western and central Texas and the southwestern United States. The eastern coast of the United States are definitely experiencing drier conditions than usual. In fact, as of May 1, 2012, 38.2 percent of the contiguous United States was experiencing drought conditions, which was an increase of 31.9 percent since January 2012. Unless the drought areas see above average rainfall, drought conditions will only persist and gradually get worse.

Drought levels are indicated through five types of intensity. They are rated D0 through D4:

-D0 indicates abnormally dry conditions. D0 is the lowest drought indicator that practically shows slightly drier areas than normal. Note: D0 areas are not considered to be in a drought.
-D1 indicates a moderate drought.
-D2 indicates a severe drought.
-D3 indicates an extreme drought.
-D4 is the highest level of drought. It shows exceptional drought, and it typically takes months to reach this level of intensity.

In the contiguous United States, there are two main areas of concern regarding extreme to exceptional drought conditions: parts of the southeast and across eastern New Mexico and western Texas. Let’s take a look at each region and figure out if the next few months can offer us some rainfall relief: 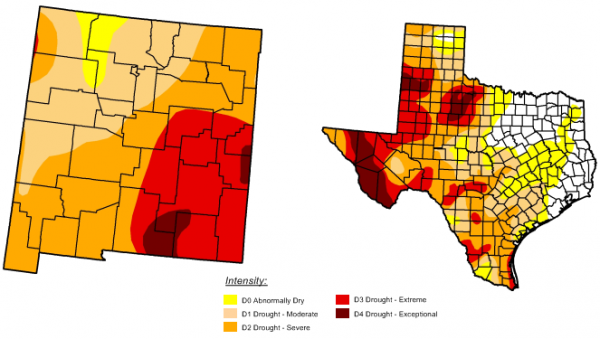 Drought levels are in the severe to exceptional levels in parts of New Mexico and Texas as of May 8, 2012. Image Credit: National Drought Mitigation Center

In 2011, the biggest story was the consistent drought and wildfires that plagued parts of Texas, New Mexico, and Oklahoma. This past winter and spring, we saw an increase in southerly flow and upper level lows that brought conducive conditions to bring beneficial rains across the region. In the month of April, the dry line became a fairly dominant feature across these areas that helped spark showers and thunderstorms. For parts of Central and Eastern Texas, the drought conditions have improved significantly. However, western portions of Texas and eastern New Mexico are still experiencing D3-D4 drought levels. For the month of April, these areas experienced record warm temperatures with highs breaking over 100 degrees Fahrenheit across Lubbock and Childress, Texas. Warm temperatures and higher sun angles can speed up the process of evaporation in the soil, thus intensifying the drought. Fortunately, the dry conditions have not caused significant issues with fire weather conditions. In fact, wildfires have been pretty nonexistent for a large portion of this area. According to the National Weather Service, there has only been a few days where there was an elevated fire weather conditions for the past month across the region. 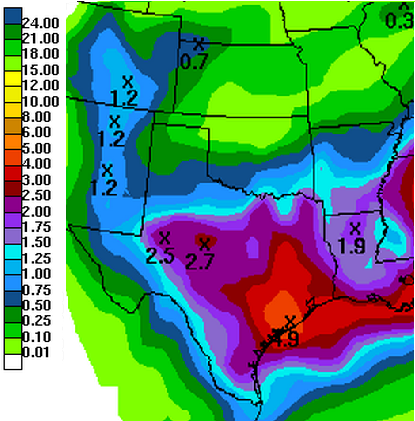 The potential for heavy rain across Texas are high for the next four to five days. Image Credit: Hydrometeorological Prediction Center

In the short term range for May 11-16, 2012, a large portion of Texas will experience very beneficial rains due to an upper level low slowly drifting east. On Thursday, May 10, 2012, storms across Texas produced some severe weather. The Hydrometeorological Prediction Center (HPC) has most of the drought areas in New Mexico and Texas to receive at least an inch of rain with three to four inches possible across southeast Texas. 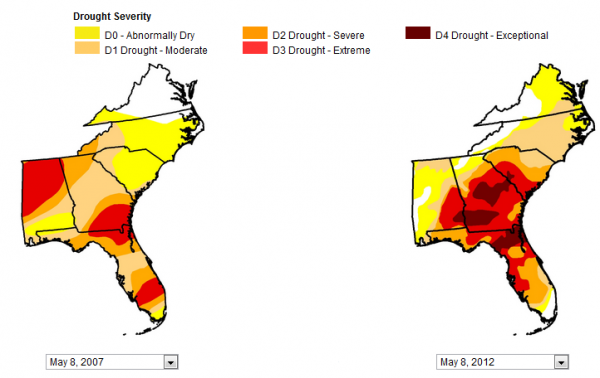 Drought levels on May 8, 2012 are worse than the beginning stages of the severe drought in the summer/fall of 2007. Image Credit: National Drought Mitigation Center

The strongest drought area is over parts of Georgia and Florida. In Georgia, most of the area is in a severe to exceptional drought, except for the northwestern portions of the state which has received decent rainfall amounts this past winter and spring. The last time this region experienced severe drought conditions that resulted in large impacts across the region was back in 2007. If you compare the drought levels on May 8, 2012 compared to May 8, 2007, you will notice that the drought is much worse now than it ever was five years ago. In the deep south, the summer typically provides hot weather with temperatures in the 90s and lows in the 70s with isolated chances for thunderstorms to develop. Little amounts of rain will not improve the drought, especially in the exceptional areas in southeast Georgia and northern Florida. The month of March provide the southeast very little precipitation. In return, the southeast mainly had a significant ridge of high pressure that was the main contributor to the extreme warm temperatures that made March 2012 the warmest March on record. According to farmers, the drought across South Georgia has not taken a toll on the corn crop. However, cotton and peanut crops have been planted, and these crops are the ones that will likely feel the greatest effects from the ongoing drought. All three crops depend on water heavily, and average rainfall amounts will not help the situation at all. 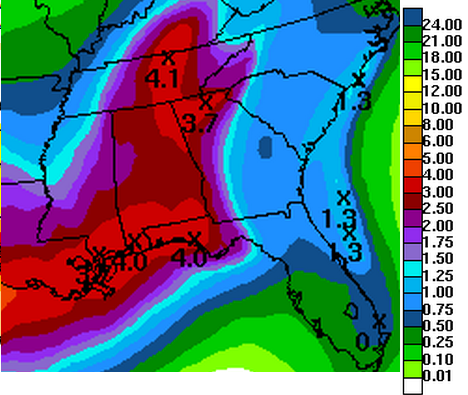 Estimated rainfall totals for the next five days (May 11 through May 16, 2012) across the southeast. Image Credit: Hydrometeorological Prediction Center

The same system that is affecting parts of Texas and the Gulf of Mexico will slide east into the southeastern United States. The upper level low can move sporadically and cause forecast problems, but the general idea is that a large part of the southeast will see some beneficial rains. If you look at the image above though, the areas to see the most rainfall will be across the same areas that have already seen a decent amount of rain (Alabama and northwest Georgia). The biggest drought areas could see an inch of rain, but the heaviest rains will likely stay to the west. Unfortunately, normal rainfall totals will not improve the drought situation across these areas according to the National Weather Service at the Southeast River Forecast Center. The areas experiencing the highest drought levels will only improve if they see above average rainfall amounts, which can be difficult to do in the summertime unless a tropical system affects the area.

Precipitation forecast for June, July, and August of 2012 show equal chances for rainfall across the majority of the country except for below average amounts of rain possible across the Pacific Northwest. Image Credit: Climate Prediction Center

Based on the forecasts provided by the Climate Prediction Center, there are not any known threats for low precipitation totals for June, July, and August of 2012. In fact, a large majority of the United States will have equal chances (EC) of seeing above, below, or average rainfall amounts. The only drier than average areas that could occur will be across the Pacific Northwest. The influence of the ENSO has a strong impact on who sees rainfall. The ENSO is the short term abbreviation for the El Niño-Southern Oscillation, an area we use to look at the ocean water temperatures off of the equatorial waters of the eastern Pacific Ocean. As stated in a previous post, La Niña has officially faded away, and we are experiencing neutral conditions. The neutral conditions are expected to persist during the summer months, so there is more of a balance for areas to see and experience rainfall. In La Niña conditions, which is something that has dominated the global weather for the past two years, drier conditions typically exist in the southern United States as the main jet stream energy is further north across the Pacific Northwest. Hopefully, with neutral conditions likely lasting for the next three months, areas in drought conditions can see some rainfall during the summer months. Unfortunately, the summer months are typically one of the drier parts of the year. Organized storms are highly unlikely across the deep south, and pulse thunderstorms are typically the dominant weather story during the summer months. Pulse thunderstorms are mainly storms that develop during the heating of the day and occur after 2pm and typically dissipate after 10pm when the sun has set. They develop due to the high instability in the atmosphere, but fortunately, they typically have zero to very little shear to work with, which means the tornado threat is extremely low to nonexistent. 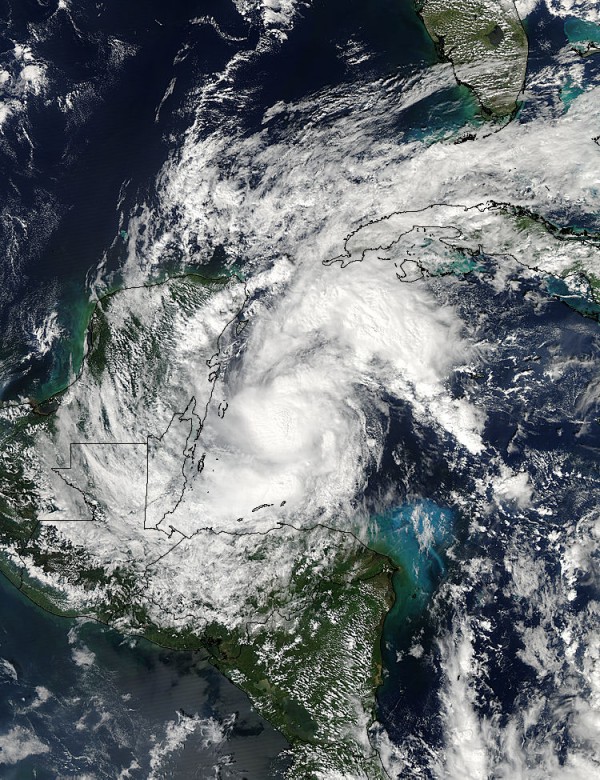 There could be a greater threat for tropical implications this summer across the deep south as ocean temperatures are above average across the Gulf of Mexico and the Caribbean. If favorable lift, instability, and lowering pressures occur in these areas, a tropical system could develop. Obviously, if a tropical cyclone pushes into these drought regions, it would be a great source for significant rains and relief. In my opinion, the 2012 Hurricane Season could be one where threats develop closer to home. The sea surface temperatures are slightly cooler than normal across the Atlantic Ocean, and I believe storms that form in the central and eastern Atlantic ocean will likely occur later in the season in August and September. At that point, it will be unknown as to whether or not we will transition into an El Niño. If we do, it could increase wind shear across the Atlantic, which would ultimately slow down the process of tropical development. Like all forecasts, there are many variables that we are not sure about. Weather is always changing, and one variable could drastically alter the weather across any part of the world.

Bottom line: Drought has worsen across Florida, Georgia, South Carolina, western Texas, eastern New Mexico, and along the east coast. The major effects of the drought have not started yet, but if they continue, wildfires, water shortages, and crop failure are likely in the regions experiencing the highest drought levels of D3 and D4. In the short term, a cut off low will affect the drought regions and could help those out in the rain department. HPC, who forecasts and estimates rainfall totals, believes many of the drought regions could see at least an inch of rain within the next four to five days. The long range forecasts shows equal chances for rainfall across most of the United States, with drier conditions possible across the Pacific Northwest. It is important to note that average rainfall will not help the drought situation. Areas experiencing extreme to exceptional drought will likely need above average rainfall totals to slowly eat away the drought conditions. Temperatures will likely stay above average in the southern parts of the United States as we roll into summer. Word of advise: If you are in the drought areas now, conserve your water now and be aware of how you use it.