An astrophysicist and an ecologist are combining their expertise using drones, thermal cameras and the techniques used to analyse objects in space in order to help endangered species. 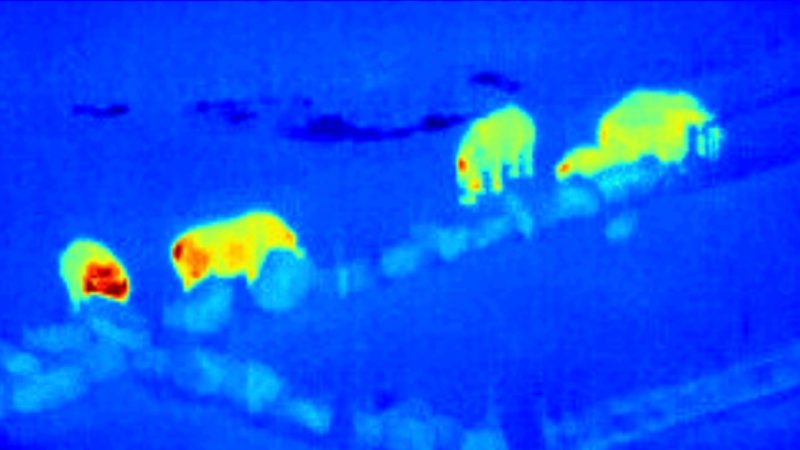 False-colour, thermal-infrared image of a “crash” of rhinos taken from drone video footage at Knowsley Safari Park in Merseyside, England. Image via LJMU.

An astrophysicist and an ecologist from Liverpool John Moores University (LJMU) in Liverpool, England announced on February 6, 2017 that they’ve brought together their expertise using drones, thermal cameras and the techniques used to analyse objects in space in order to help endangered species, including rhinos and orangutans.

Their new study on this subject is published in the peer-reviewed International Journal of Remote Sensing.

LJMU professor Serge Wich, is a pioneer in using drones for conservation work and the founder of conservationdrones.org. He commented:

As an ‘eye in the sky’, conservation drones are helping the fight against illegal deforesting, poaching and habitat destruction, all leading to many species being endangered, including rhinos, orangutans, and elephants. Now, teamed with the same astrophysics analysis techniques used to find and identify objects in the far-distant universe, we can try to do this more efficiently.

The World Bank estimates that ecosystems provide $33 trillion every year to the global economy and biodiversity loss and consequent ecosystem collapse is one of the 10 foremost dangers facing humanity. We hope this research will help tackle these problems by allowing anyone in the world to upload their aerial data and in real time get back geo-locations of anything, whether that be survivors of natural disasters, or poachers approaching endangered species, or even the size, weight and health of livestock.

Astrophysicist Steve Longmore of LJMU explains why this is possible:

Astrophysicists have been using thermal cameras for many decades. Crucially, it turns out the techniques we’ve developed to find and characterise the faintest objects in the universe are exactly those needed to find and identify objects in thermal images taken with drones. The key to success is building libraries of the thermal heat profiles that act like ‘thermal finger prints,’ allowing us to uniquely identify any animals detected.

Our goal is to build the definitive finger print libraries and automated pipeline that all future efforts will rely upon.

These scientists say the next stage of this research, which will be funded by the Science and Technology Facilities Council in the UK, will be to expand their techniques to other applications, including disaster relief and search and rescue. The videos below show how the technique can be used to look in on lots of living creatures, for example rhinos:

Bottom line: An astrophysicist and an ecologist are combining their expertise using drones, thermal cameras and the techniques used to analyse objects in space in order to help endangered species.