Dolphins use specific whistles as names

African bottlenose dolphins join the list of dolphins known to use signature whistles to address each other – similar to how humans use names.

The vast majority of research into how bottlenose dolphins communicate has been conducted in captivity or on animals who are restrained during the study. These studies have shown that a dolphins learns its own individually distinctive whistle, known as a signature whistle. Groups of dolphins are known to exchange signature whistles when they meet at sea. The dolphins use the whistles to address each other – similar to how humans use names. But it was unclear whether African bottlenose dolphins use a similar communication system, until now.

Dr. Tess Gridley of the University of Pretoria and the Namibian Dolphin Project and Sea Search is the project leader. She explained:

The population we study in Walvis Bay, Namibia is a small, isolated population of common bottlenose dolphins. Currently, there are only around 100 animals in the population. Walvis Bay, has lots of man-made pressures, including coastal construction, shipping and marine tourism. We are therefore concerned for their long-term welfare and capacity to cope with these stressors.

These researchers say their work provides an important stepping stone for future studies into how the sounds are used, and whether human activity is affecting communication in the small dolphin population. Gridley fears that noise from the construction may block the dolphin’s signals making it harder for them to communicate with each other. Gridley said:

In the same way that the desert elephants or desert lions are small, locally adapted populations in Namibia’s terrestrial environment, the common bottlenose dolphins found along Namibia’s the coastline should be considered quite an important population and are locally threatened by coastal construction and marine tourism. 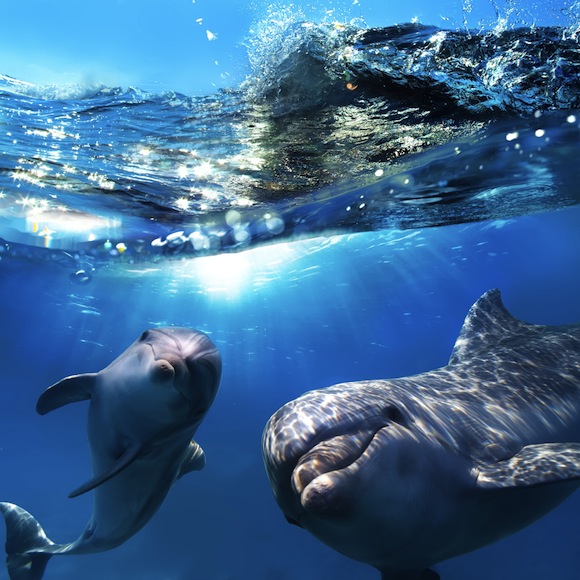 Bottlenose dolphins are an iconic marine species and one of the best studied dolphin species worldwide. But, research in Africa, especially on the larger truncatus form, is much more sparse.

Most dolphin species rely on a wide variety of sounds in their day to day lives. They use sound to find food and navigate, as well as communicate with each other. Bottlenose dolphins can learn new sounds and can quickly mimic novel sounds that they hear.

Although fairly common among many bird species and humans, this ability, termed vocal production learning, makes them quite special amongst mammals.

Using a hydrophone – a microphone used for underwater recording – Gridley and colleagues collected over 79 hours of recordings of signature whistles, alongside identification photos of the dolphins who made them.

On analysing the data they found good evidence for signature whistle use. Gridley said:

We found that the number of different signature whistles recorded increased when group sizes were larger and when calves were present – something you might expect if signature whistles are used to address each other and help maintain contact between animals, particularly between mothers and calves.

Walvis Bay, Namibia was chosen as a key research site because human activity is threatening the unique bottlenose dolphin community. There is lots of construction planned in Walvis Bay over the coming years, including a new port.

The catalogue of whistles produced as part of this study will help researchers to build a better understanding of how human activity is affecting the dolphins. Next, Gridley is also hoping to look into whether these individually distinctive calls can be used to monitor how the dolphins use their habitats.