Dogs arrived in Americas only 10,000 years ago, says study

By associating with early humans, dogs enjoyed new foods and the relative safety of human camps. Eventually, dogs traveled the world with their two-legged masters. 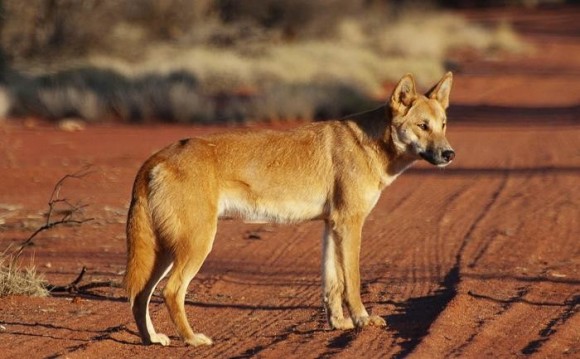 New evidence suggests dogs arrived in the Americas only about 10,000 years ago. Some believe the ancient dogs looked a lot like present-day dingos. Image credit: Angus McNab

A new study – which analyzed DNA from ancient dog remains at more than a dozen sites in North and South America – suggests that dogs might have first migrated successfully to the Americas only about 10,000 years ago. That’s thousands of years after the first human migrants are thought to have crossed a land bridge from Siberia to North America. The study looked at the genetic characteristics of 84 individual dogs at the North and South American study sites. It’s the largest analysis so far of ancient dogs in the Americas. The findings appeared this month (January, 2015) in the Journal of Human Evolution.

Unlike their wild wolf predecessors, ancient dogs learned to tolerate human company and generally benefitted from the association, researchers say. Dogs gained access to new food sources, and enjoyed the safety of human encampments. Dogs also were pressed into service as beasts of burden, and sometimes were served as food, particularly on special occasions. For all of these reasons, dogs eventually traveled the world with their two-legged masters.

Dogs are one of the earliest organisms to have migrated with humans to every continent, and I think that says a lot about the relationship dogs have had with humans. They can be a powerful tool when you’re looking at how human populations have moved around over time.

Analysis of ancient dog remains is often permitted in places where analysis of human remains is not, Will said

… because living populations who are very connected to their ancestors in some cases may be opposed to the destructive nature of genetic analysis.

The new study focused on mitochondrial DNA, and included a much larger sample of dogs than had been analyzed before.

Included in the study were samples from a site in southern Illinois known as Janey B. Goode, near present-day St. Louis. The Janey B. Goode site is located near the ancient city Cahokia, the largest and first known metropolitan area in North America. Occupation of the Janey B. Goode site occurred between 650 and 1,400 years ago, the researchers said, while Cahokia was active from about 1,000 to 700 years ago.

Dozens of dogs were ceremonially buried at Janey B. Goode, suggesting that people there had a special relationship with dogs. While most of the dogs were buried individually, some were placed back-to-back in pairs.

In Cahokia, dog remains, sometimes burned, are occasionally found with food debris, suggesting that dogs were present and sometimes were consumed. Dog burials during this time period are uncommon. 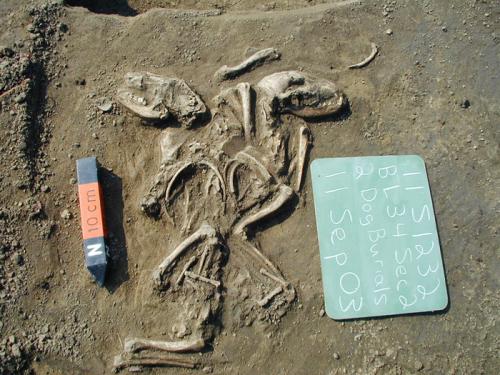 A ritual burial of two dogs at a site in Illinois near St. Louis suggests a special relationship between humans and dogs at this location and time (660 to 1350 years ago). Image via Illinois State Archaeological Survey, Prairie Research Institute

As previous studies had done, the research team analyzed genetic signals of diversity and relatedness in a special region (the hypervariable region) of the mitochondrial genome of ancient dogs from the Americas.

The researchers found genetic signatures in the new samples suggesting greater ancient dog diversity in the Americas than previously thought. They also found unusually low genetic diversity in some dog populations, suggesting that humans in those regions may have engaged in dog breeding.

In some samples, the team found significant genetic similarities with American wolves, indicating that some of the dogs interbred with or were domesticated anew from American wolves.

But the most surprising finding had to do with the dogs’ arrival in the Americas. Witt said:

Dog genetic diversity in the Americas may date back to only about 10,000 years ago.

This also is about the same time as the oldest dog burial found in the Americas, which may not be a coincidence, the researchers suggest.

The current study, of only a small part of the mitochondrial genome, likely provides an incomplete picture of ancient dog diversity in the Americas, say the researchers. 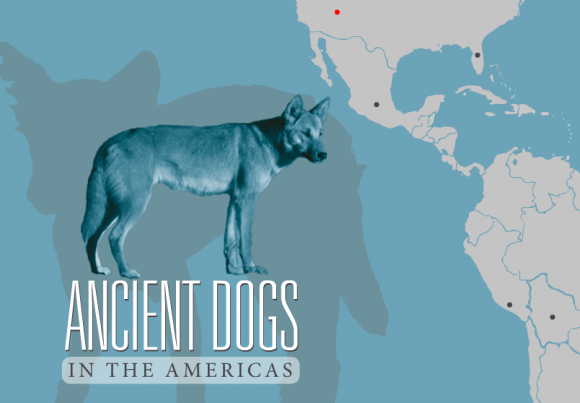 Bottom line: A study published in January, 2015 in the Journal of Human Evolutionsuggests that dogs may have first successfully migrated to the Americas only about 10,000 years ago, thousands of years after the first human migrants crossed a land bridge from Siberia to North America.