Dodos weren’t so dumb after all

New research suggests that dodo birds might have been quite intelligent. 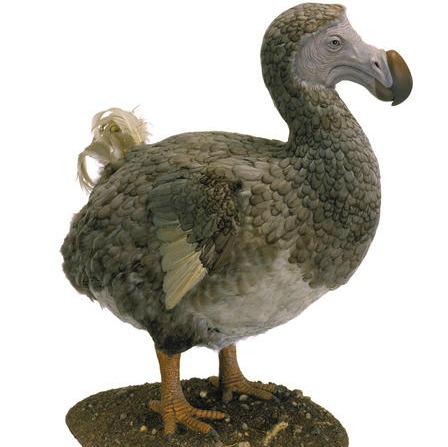 A model of a dodo that will be on display in the Museum’s upcoming exhibition about the relationships between birds and dinosaurs, Dinosaurs Among Us. Image: © AMNH/C. Chesek

The dodo, an extinct bird whose name has entered popular culture as a symbol of stupidity, was probably fairly smart. That’s according to new research published February 23, 2016 in the Zoological Journal of the Linnean Society. The study finds that the overall size of the dodo’s brain in relation to its body size was on par with its closest living relatives, the pigeon — a bird whose ability to be trained implies it’s no dummie.

The dodo was a large, flightless bird that lived on the island of Mauritius in the Indian Ocean, where they were last seen alive in 1662. When sailors discovered the island in the late 1500s, the dodo didn’t fear these new arrivals. That led to the birds being herded onto passing boats as an easy meal for passing sailors.

Eugenia Gold, a research associate at the American Museum of Natural History, is the lead author of the paper. Gold said:

Because of that behavior and invasive species that were introduced to the island, they disappeared in less than 100 years after humans arrived. Today, they are almost exclusively known for becoming extinct, and I think that’s why we’ve given them this reputation of being dumb.

Side views of brain scans from the dodo (A), the Rodrigues solitaire (B), and Caloenas nicobarica (C), a type of pigeon. Image: © AMNH/E. Gold

Though the bird has become iconic in popular culture, most aspects of the dodo’s biology are still unknown, partly because specimens are extremely rare. To examine the brain of the dodo, Gold tracked down a well-preserved skull from the collections of London’s Natural History Museum and imaged it there with high-resolution computed tomography (CT) scanning, which can produce images of the brain inferred from the shape of the skull. 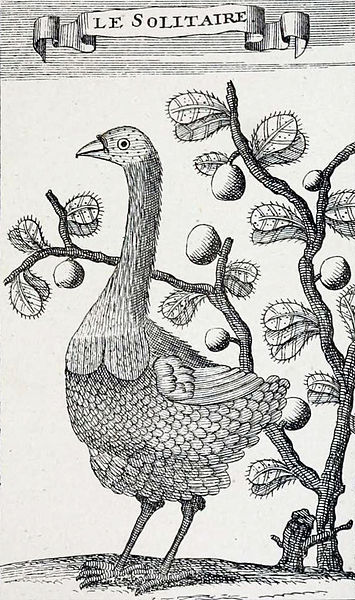 Rodrigues solitaire. The only known drawing by someone who observed the bird in life, by François Leguat, 1708. Image credit: Wikimedia

In the Museum’s Microscopy and Imaging Facility, Gold also CT-scanned the skulls of seven species of pigeons for comparison, while colleagues at the Natural History Museum of Denmark and National Museum of Scotland sent her the endocasts for the dodo’s closest relative, the now-extinct Rodrigues solitaire. The results found that the dodo’s brain was about average for its body size. Gold said:

So if you take brain size as a proxy for intelligence, dodos probably had a similar intelligence level to pigeons.Of course, there’s more to intelligence than just overall brain size, but this gives us a basic measure.

While the brains of dodos might not have been small, they did reveal some unexpected surprises. The study found that both the dodo and the Rodrigues solitaire had large and differentiated olfactory bulbs, an unusual trait in birds, which depend on sight and thus usually have more heavily developed optical lobes. The authors suggest that because dodos and solitaires were ground-dwellers, they relied on smell to find food, making an oddly large olfactory lobe an asset.

Bottom line: Research published February 23, 2016 in the Zoological Journal of the Linnean Society suggests that the extinct dodo birds might have been quite intelligent.

Read more from the American Museum of Natural History