A new study suggests that elephants make a specific rumble in response to the danger of humans that’s distinct from calls warning of bees or other threats. 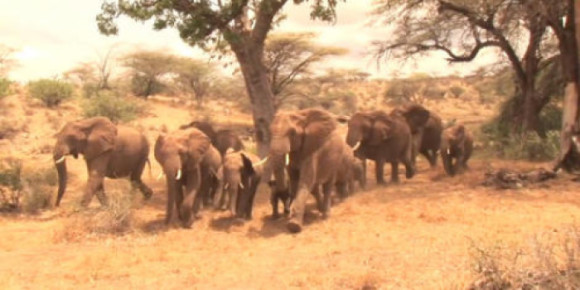 African elephants make a specific alarm call in response to the danger of humans, according to a new study of wild elephants in Kenya.

Researchers from Oxford University, Save the Elephants, and Disney’s Animal Kingdom carried out a series of audio experiments in which recordings of the voices of the Samburu, a local tribe from North Kenya, were played to resting elephants. The elephants quickly reacted, becoming more vigilant and running away from the sound whilst emitting a distinctive low rumble.

When the team, having recorded this rumble, played it back to a group of elephants they reacted in a similar way to the sound of the Samburu voices; running away and becoming very vigilant, perhaps searching for the potentially lethal threat of human hunters.

The new research, recently reported in PLOS ONE, builds on previous Oxford University research showing that elephants call ‘bee-ware’ and run away from the sound of angry bees. Whilst the ‘bee’ and ‘human’ rumbling alarm calls might sound similar to our ears there are important differences at low (infrasonic) frequencies that elephants can hear but humans can’t.

‘Elephants appear to be able to manipulate their vocal tract (mouth, tongue, trunk and so on) to shape the sounds of their rumbles to make different alarm calls,’ said Dr Lucy King of Save the Elephants and Oxford University who led the study with Dr Joseph Soltis, a bioacoustics expert from Disney’s Animal Kingdom, and colleagues.

‘We concede the possibility that these alarm calls are simply a by-product of elephants running away, that is, just an emotional response to the threat that other elephants pick up on,’ Lucy tells me. ‘On the other hand, we think it is also possible that the rumble alarms are akin to words in human language, and that elephants voluntarily and purposefully make those alarm calls to warn others about specific threats. Our research results here show that African elephant alarm calls can differentiate between two types of threat and reflect the level of urgency of that threat.’

Significantly, the reaction to the human alarm call included none of the head-shaking behaviour displayed by elephants hearing the bee alarm. When threatened by bees elephants shake their heads in an effort to knock the insects away as well as running — despite their thick hides adult elephants can be stung around their eyes or up their trunks, whilst calves could potentially be killed by a swarm of stinging bees as they have yet to develop a thick protective skin.

Lucy explains: ‘Interestingly, the acoustic analysis done by Joseph Soltis at his Disney laboratory showed that the difference between the ”bee alarm rumble” and the ”human alarm rumble” is the same as a vowel-change in human language, which can change the meaning of words (think of ”boo” and ”bee”). Elephants use similar vowel-like changes in their rumbles to differentiate the type of threat they experience, and so give specific warnings to other elephants who can decipher the sounds.’

This collaborative research on how elephants react to and communicate about honeybees and humans is being used to reduce human-elephant conflict in Kenya. Armed with the knowledge that elephants are afraid of bees, Lucy and Save the Elephants have built scores of ‘beehive fences’ around local farms that protect precious fields from crop-raiding elephants.

‘In this way, local farmers can protect their families and livelihoods without direct conflict with elephants, and they can harvest the honey too for extra income,’ says Lucy. ‘Learning more about how elephants react to threats such as bees and humans will help us design strategies to reduce human-elephant conflict and protect people and elephants.’

Bottom line: According to a new study, African elephants make a specific alarm call in response to the danger of humans.