Discovery of one new butterfly species leads to another

Just when scientists thought that all butterfly species in the eastern U.S. were identified, researchers stumbled across not one, but two new species, right under their noses.

The charismatic beauty of butterflies makes them among the best-studied of insects by entomologists and butterfly watchers. Just when scientists thought that all butterfly species in the eastern United States were identified, researchers associated with the Howard Hughes Medical Institute stumbled across not one, but two new species in the eastern U.S., right under their noses. Their findings were reported in the February 12, 2014 issue of the journal ZooKeys.

It was completely unexpected. We were studying genetics of these butterflies and noticed something very odd. Butterflies looked indistinguishable, were flying together at the same place on the same day, but their DNA molecules were very different from each other. We thought there was some kind of mistake in our experiments.

It wasn’t a mistake. While the butterflies’ wing patterns looked similar, DNA analysis revealed signatures of two distinct groups. Grishin and his collaborators also noticed that one group had larger paler genitalia, the other had smaller darker genitalia. Their analysis revealed that not only were the butterflies two different species, they weren’t even closely related species. 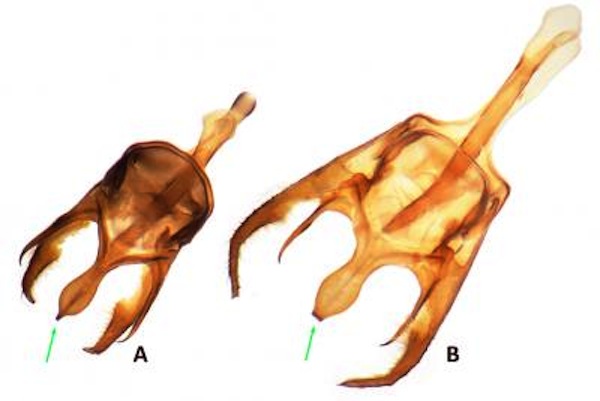 Male genitalia of the Intricate Satyr (A) is smaller and darker, and has a pointed center tip. Those of the Carolina Satyr (B) are larger, paler, and have a truncated center tip. Image Credit: Nick V. Grishin.

The Carolina Satyr (Hermeuptychia sosybius), brown in color with eyespots along the edge of its wings, is a small butterfly commonly found in the eastern US, often in shaded wooded areas. It measures just over an inch from tip to tip of its outstretched wings.

Its lookalike, a new species Grishin and his colleagues named “Intricate Satyr” (Hermeuptychia intricata), was first discovered in Brazos Bend State Park in East Texas. It has subsequently been found in several other eastern US states. Despite their similarities, the two species are distantly related.

Grishin and his colleagues continued to study DNA sequences and genitalia morphology of Satyr butterflies in south Texas, which led to the discovery of yet another new species, this one closely related to the Carolina Satyr, that they named “South Texas Satyr” (Hermeuptychia hermybius). Its wing pattern was slightly different from the Carolina Satyr, with wavier line patterns and smaller eyespots. Despite the slightly different wing pattern design, DNA sequencing results showed that the South Texas Star and Carolina were closely related species.

Despite being distantly related, the wing patterns of the Intricate Satyr (A) and Carolina Satyr (B) are very similar. The South Texas Satyr (C) is closely related to the Carolina Satyr but its wing lines are wavier with smaller eyespots. Image Credit: Nick V. Grishin.

Butterflies in the eastern US have been studied using conventional taxonomic techniques for over 250 years, that is, categorizing species by their shared physical characteristics. With DNA analysis techniques, there’s no telling how many more species, generally physically indistinguishable from each other, are waiting to be discovered. 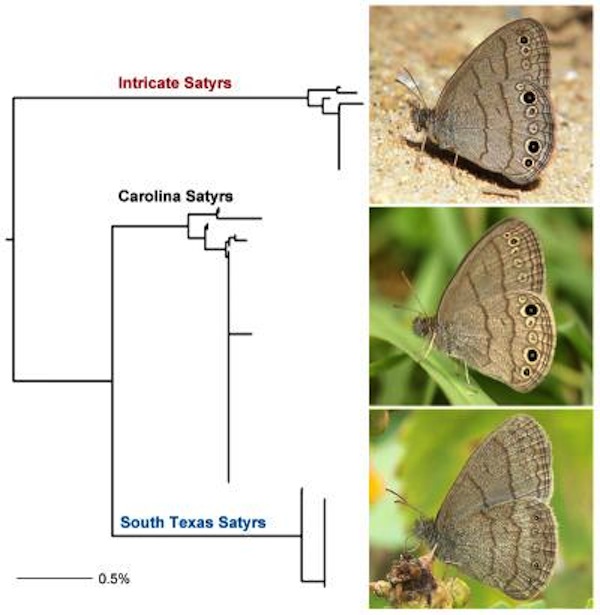 DNA sequencing analysis of the three species can be represented as an “evolutionary tree” illustrating three distinct clusters corresponding to three Satyr species. Carolina Satyr and South Texas Satyr are closely related while the Intricate Satyr is more distantly related from both of them. Image Credit: Nick V. Grishin, Vitaly Charny, and Jan Dauphin.

Scientists studying the Carolina Satyr butterfly in the eastern US have discovered two new species, hiding in plain sight, that closely resemble it. Their discovery of the Intricate Satyr was based on DNA sequencing analysis and differences in genitalia appearance. The second species, named South Texas Satyr, was discovered from additional DNA studies. Their findings were reported in the February 12, 2014 issue of the journal ZooKeys.